Many readers have seen the 1998 World War II film Saving Private Ryan. A small group of Army Rangers is sent behind German lines in post-D-Day France to find Private James Ryan whose brothers have been killed in the war. The story is loosely based on the story of the Niland brothers of Tonawanda, New York.

Technical Sergeant Edward F. Niland was not killed but was taken prisoner by the Japanese in Burma after parachuting out of his crippled B-25 bomber. He survived the war and returned to Tonawanda where he died in 1984 at age 71.

Sergeant Frederick W. “Fritz” Niland of the 101st Airborne Division, also fighting in Normandy survived the war. Truly a sad story. However, no rescue mission was sent after Sgt. Niland. He was informed of his brother Robert’s death, he was shipped back to England and eventually the United States. He died in San Francisco in 1983.

Erie, Pennsylvania was home to a similar yet more tragic story during WW II. Mrs. Anna Adams of 245 East 24th St. sent five sons into the United States Army. Only two returned alive. Buried side by side in the Erie Cemetery are the simple granite headstones of the three Adams brothers killed in WW II. Charles, Clarence and Donald. 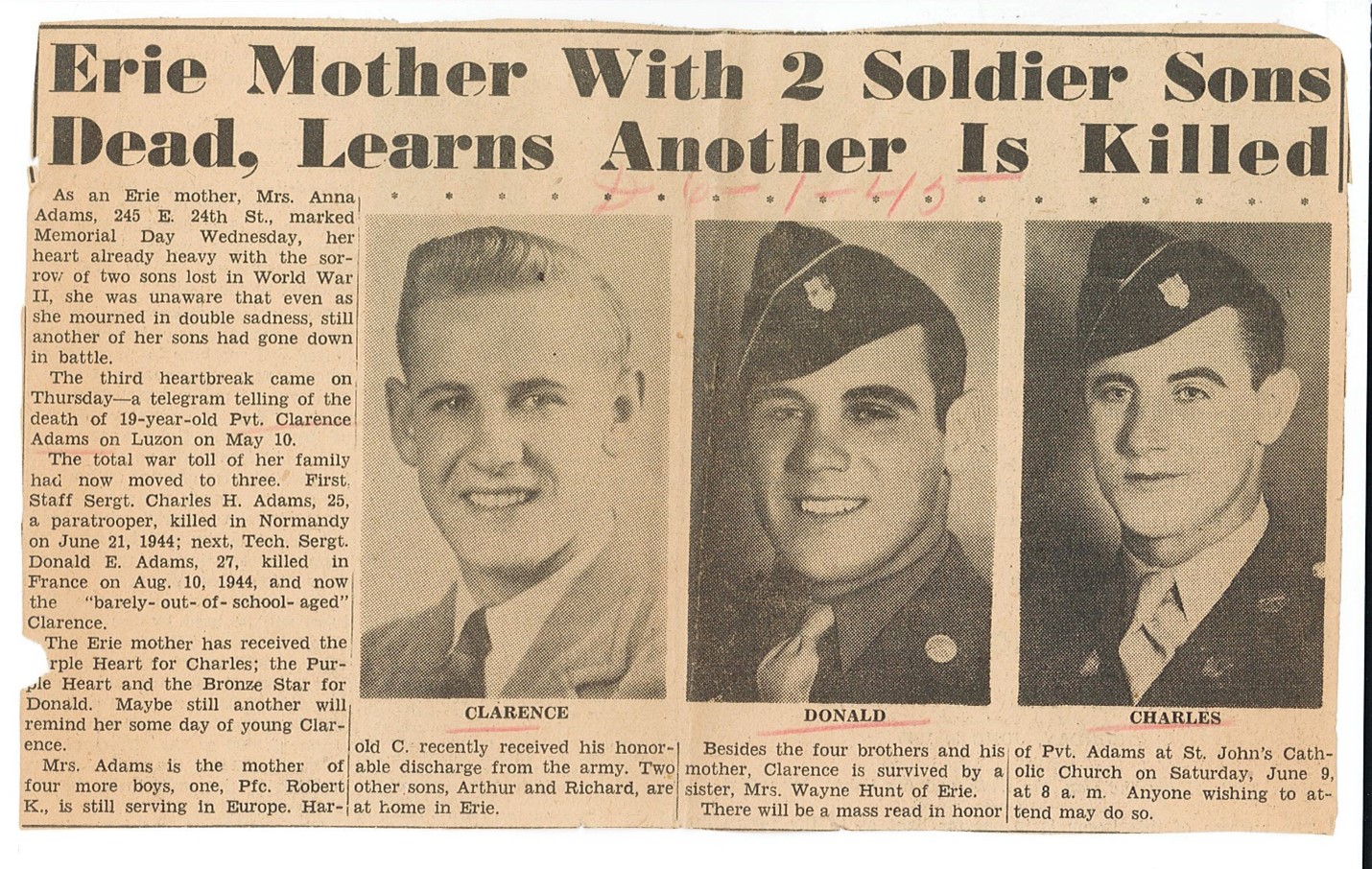 Charles H. Adams had joined the Pennsylvania National Guard earlier, serving with Northwest Pennsylvania’s 112th Infantry Regiment, 28th “Keystone” Division but transferred to the paratroopers and became a Staff Sergeant in Headquarters Company of the 506th Parachute Infantry Regiment of the 101st Airborne Division. Charles H. Adams was killed in action on June 21, 1944, in Normandy.

Technical Sergeant Donald E. Adams, age 26, was killed in action on August 10, 1944 in France while fighting with the 112th Regiment, 28th Division.

Picture the scene as it may have played out three times at 245 East 24th St. in Erie. Three times, the Western Union telegram delivery person brought the sad news. Maybe the second time in was a minister and  a representative from the Army. What must the third notification have been like? How painful must it have been. Many families lost multiple sons in World War II. 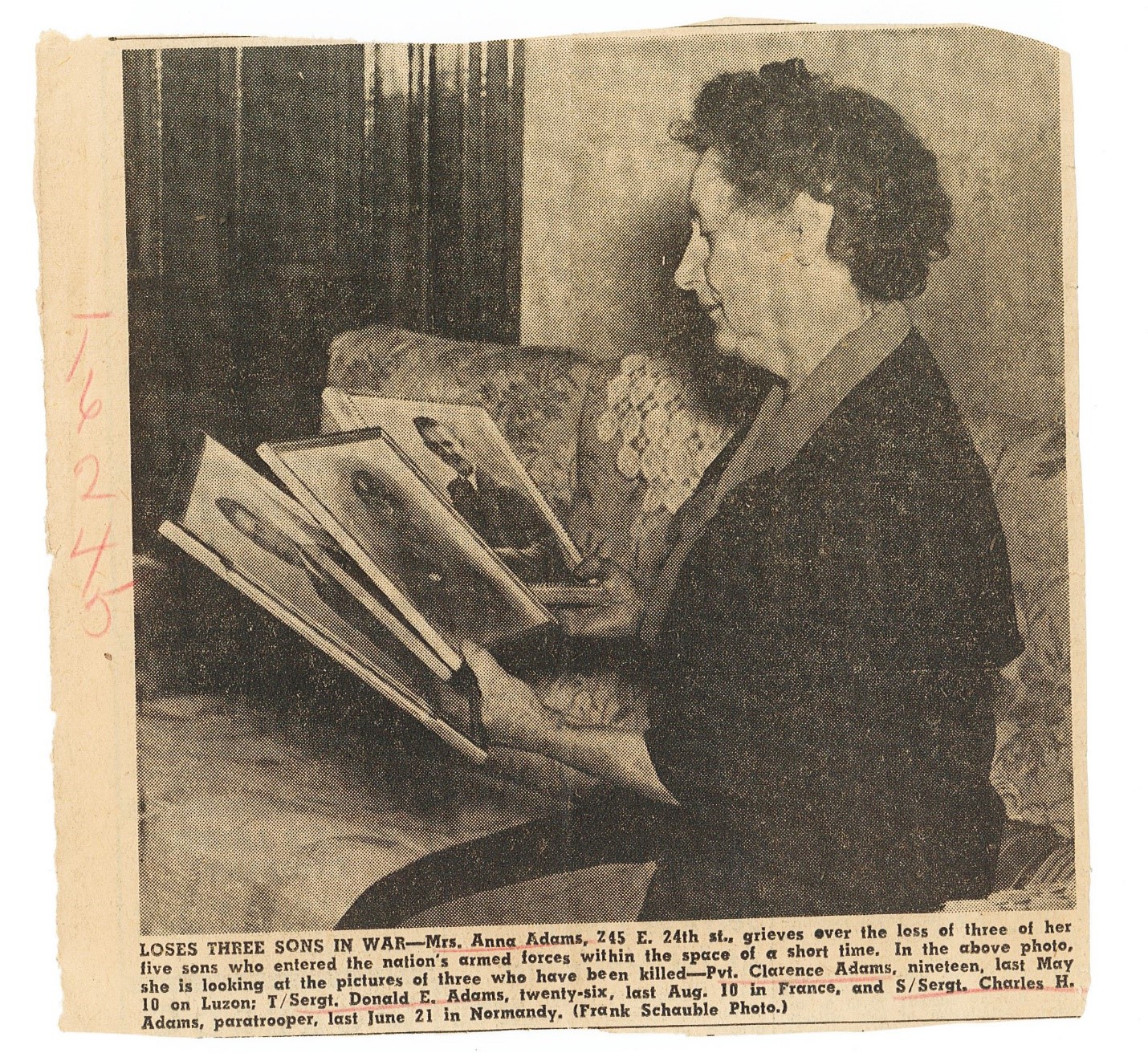 The Adams family’s loss is not unique, but it is local. There were many mothers, fathers, brothers and sisters who lost family members. There were about 298,000 “Gold Star Mothers” in the United States. (Each family hung a banner in their window bearing a blue star for each family member in the service. A gold star meant a death.)

It should be obvious to the reader that none of the men mentioned above served in the same unit as a brother. In 1942, when the USS Juneau was sunk in the South Pacific, off Guadalcanal, all five of the Sullivan brothers died when the ship was torpedoed by a Japanese submarine. After that, military policy, which is still in effect today, does not permit brothers (siblings) to serve it the same unit.

Also, in the film Saving Private Ryan, actor Harve Presnell, portraying General George Marshall, reads the famous “Bixby letter” signed by Abraham Lincoln, as justification for the mission to save Private Ryan. It is a powerful scene, but two things should be noted. Mrs. Bixby of Boston did not lose five sons and she claimed. Two of her five serving sons were killed in action but one deserted, one died in the hospital of tuberculosis and the fate of the fifth is uncertain.

The other notable thing about the letter to Mrs. Bixby of Boston is that Lincoln probably did not write it. The wording seems to Lincoln scholars to be that of Lincoln’s secretary, John Hay.

Mr. Don Grumblat of Erie played Taps at the Adams funeral August 1948. I a service held at the Erie Cemetery, all three flag-draped caskets sat side by side as Mrs. Adams sobbed “Oh, my boys.” 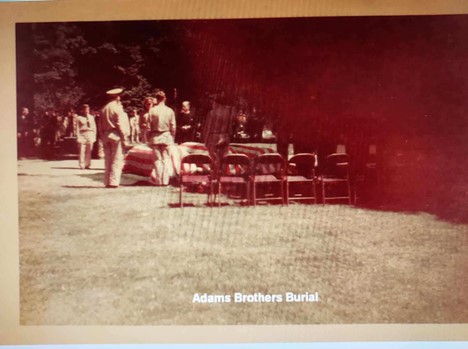 A visitor to the Erie Cemetery  will see many flags over the graves of soldiers of America’s wars. Stop at the office and ask where the three Adams brothers are buried, and they will point you in the right direction.

If you had a relative or someone you know that served in the military in WW II, you can research their service records at the Hagen History Center in Erie, Pennsylvania. A collection of over 26,000 index cards along with in most cases, an envelope containing newspaper clippings about that service member or woman is available for research, but please, call ahead. 814-454-1813. 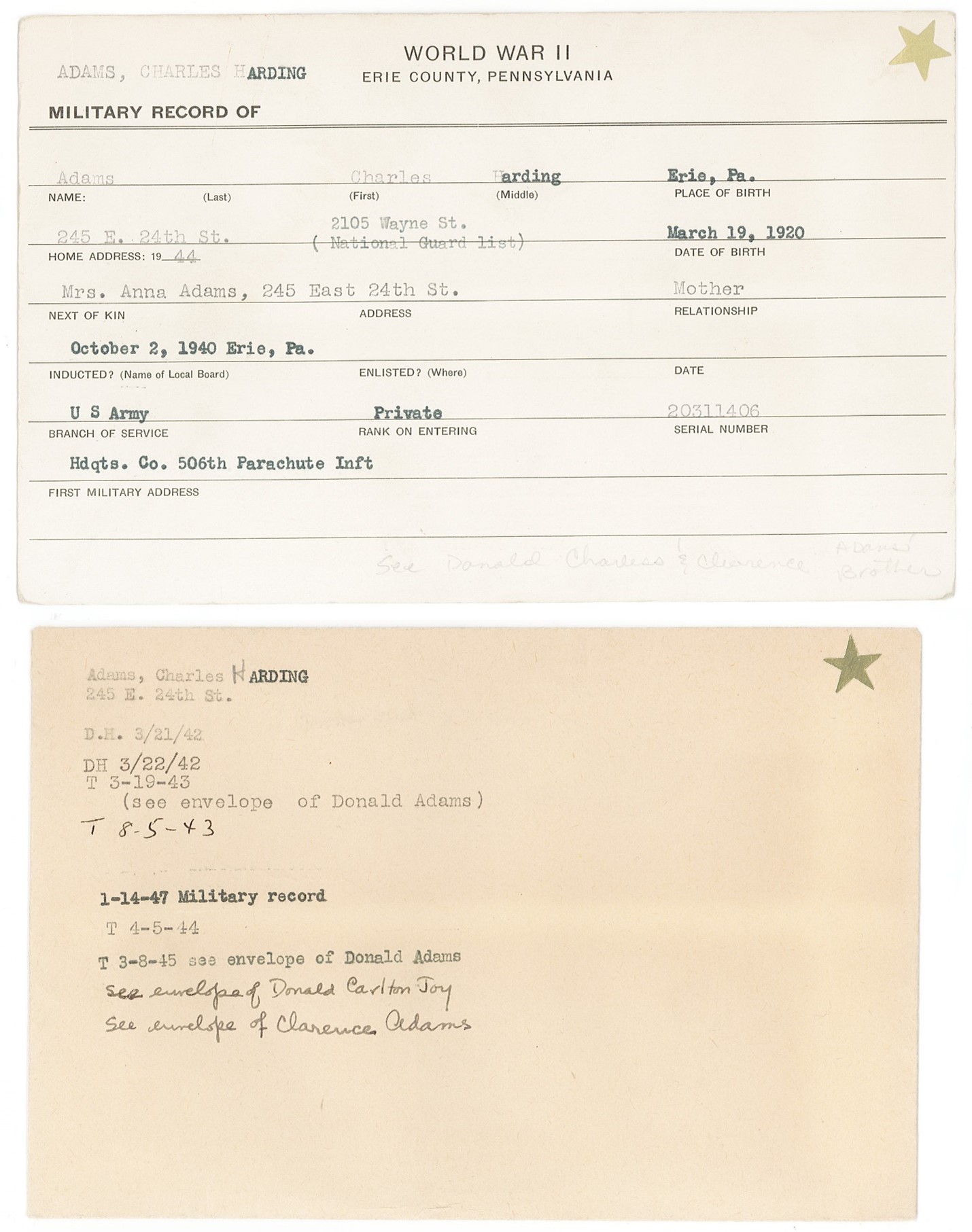