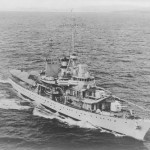 The USS Erie in WW II

The USS Erie, (PG-50) classified as a gunboat rather than a cruiser, (most US Navy ships named for cities were cruisers) launched at the Brooklyn Navy Yard in 1936. The ship was christened by Mrs. Ida Knoll of Erie, Pennsylvania. Mrs. Knoll was the mother of future Rear Admiral, Denys Knoll, United States Navy. The new ship was had a displacement of 2,000 tons, 328 feet in length, 41’3” wide and carried a compliment of 234 sailors and marines. She was armed with four 6” guns, two quad machine guns and two 3-ponders. The ship also carried a floatplane used for reconnaissance. 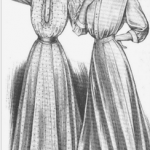 Happiness & Long Life for All its Residents #107

A few blogs ago I wrote about the variety and number of businesses that were located in downtown Erie. I pulled the 1913 Erie City Directory for some of that information and was impressed by all the dressmakers I found in the book. Today, we think nothing about going to a store and picking up what we want “off the rack.” Well, that is not always the case for those of us with harder to find sizes (I am taller than the average) so we shop the internet or get something altered. Who were these dressmakers? 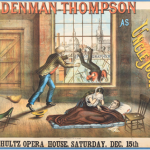 Happiness & Long Life for All its Residents #106

Just when I thought I knew about every notable person from Erie, I was wrong. In reading John Nolen’s 1913 recommendations to Erie, I found the following sentence: “Horace Greeley, Dan Rice and Denman Thompson, names familiar to American people, figure prominently in the history of Erie County.” Denman who?? 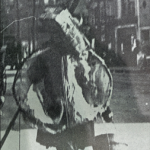 Joe Root lived alone on the Peninsula but despite this he held quite the social circle. His trips across the bay were made possible by friendly fishermen who would give him passage free of charge. After landing at the foot of State Street, Joe would take quarter in Sullivan’s Saloon before trudging into town. 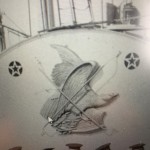 Over the past several weeks, a series of blogs about the service of the United States Paddle Wheel Frigate Michigan/Wolverine have appeared here on this website. Michigan/Wolverine was truly a fascinating ship. The first iron-hulled ship in the United States Navy. Commissioned as the USS Michigan in 1845, she spent her entire career on the Great Lakes. Her home port was Erie, Pennsylvania. Over her lengthy career, so many officers and enlisted sailors stationed aboard the ship married Erie women, she city earned the nickname “Mother-in-law of the Navy.” The ship was one of the longest continuously serving ships in U.S. Naval history. This short blog will examine one of the remaining artifacts of this ship. 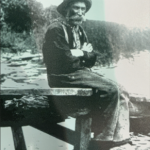 The legend of Joe Root is one both of fact and fiction. Despite his humble appearance he was a king in his own right. In the place of a bejeweled cloak were tattered trousers and in the place of a crown was a ragged hat. His kingdom was the Peninsula, and his treasure was the nature on her shores. Joe feasted on raw fish and berries in his castle of a wooden crate. Images such as this conjure a larger-than-life folk figure that we romanticize today. Fueled by the obscurity of who Joe root was and where he came from further fire the lore. Surprisingly enough there is truth in the mystery that was Presque Isle’s hermit.