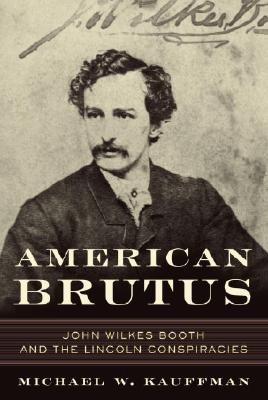 The events surrounding the assassination of Abraham Lincoln are as familiar to most Americans as the events surrounding the murder of John F. Kennedy. A crazed actor shot the President in a box at the theater and fled into the night with an accomplice, shot down in a burning barn twelve days later. What most do not know is the many details,  personalities, and events of Booth’s plan and his many accomplices before and after the assassination itself. In his 2004 book, Michael W. Kauffman, one of the foremost authorities on the event takes the reader to new level in his account.

Much of the first third of the book paints a dark and detailed picture of Booth. Born in Maryland, he thought of himself as a Southern gentleman and wrote and spoke fondly of the antebellum period, almost as if he saw it through a fog. The son and brother of famous actors Junius Brutus and Edwin Booth who were accomplished actors, especially known for their performances of Shakespeare. John was coddled as a boy and followed his father to the stage. His performances were said to be athletic and exciting. In one memorable sword fight, he was cut by the opposing actor and bled but never flinched and continued on. Age twenty-six at the time of the assassination, Booth was a popular attraction and made upwards of $20,000 a year, a hefty sum in the 1860s.

Booth, however had begun to act less and less as the Civil War went on. He was active in supporting the Confederate cause, smuggling goods like medicines into Virginia through a system of other sympathizers in Southern Maryland. In March 1865, Booth and a band of conspirators plotted to kidnap Lincoln at different places and manners and trade him for Confederate soldiers in Union prison camps.   War, however,  came to an end in April, and there was no reason to kidnap The President.

The morning of April 14, 1865, Booth went to Ford’s Theater on 10th Street in Washington, D.C., to pick up his mail. There he learned that Lincoln and party would be attending a performance of Our American Cousin, a comedy staring Laura Keene. He quickly developed a plan and called his conspirators together.

Booth would meet with David Herold, George Atzerodt and Lewis Paine, all of whom would all have a role to play in the plot their master had devised for that very night. Booth would kill Abraham Lincoln at Ford’s Theater in his box. Herold would guide Paine to the home of Sec. of State William Seward and kill him. Atzerodt would kill Vice President Andrew Johnson at his hotel. The killers would then meet up in Southern Maryland and cross the Potomac River into Virginia where booth reasoned they would be welcomed as heroes.

The details of Booth’s hurried planning and the people that pass through that day is fascinating reading. The events of that night are detailed in great depth by the author. Booth succeed and fled with Herold; Paine brutally stabs Seward and others in his home but did not kill the secretary. His guide, Herold, fled the scene leaving Paine to hide out in Washington until his capture two days later. George Atzerodt did nothing but paid the same price as others.

The role of Mary Surratt is examined in depth. Her son John had been involved in the March,1865, kidnapping plot but had since left for Canada. Mary Surratt owned a boarding house on H Street in Washington and Booth and others had met there on occasion. The day of the assassination, Booth visited the boarding house, knowing Mrs. Surratt was traveling to a tavern she owned in Surrattsville, Maryland, to pick up money owed her by the tavern’s caretaker. Booth asked Mrs. Surratt to delver a small parcel to John Lloyd there and to tell him to get certain items ready for that night. Later, when Paine was arrested, he was at Mary Surratt’s boarding house. She would hang with Paine, Herold and Atzerodt in July 1865.

The most griping part of the book details the hunt for Booth and Herold. Eluding capture for twelve days, the two were given aid by many in Southern Maryland and in Virginia. None were punished except for Samuel Mudd, a doctor in Bryantown, Maryland, who set the leg Booth had broken when he jumped from Lincoln’s box. Many have assumed Mudd was innocent and knew nothing of the assassination plot. Kauffman makes clear the while Mudd may have been innocent in the assassination scheme, he certainly knew Booth. In planning for the March kidnapping, Mudd had shown Booth around Charles County, believing him to be a real estate prospector. Did Mudd know what Booth had done at Ford’s Theater just hours before? No, but by setting Booth’s broken leg, Mudd had become an accessory after the fact. He served just few years of his life sentence and was pardoned

American Brutus is a great read, fast paced like a detective novel, and deeply researched. This book is a must for Lincoln scholars or those interested in the assassination. Much like Manhunt by James L. Swanson, American Brutus is more detailed and covers all the characters involved. Alas, the character whose role is discussed least, as in most books on the assassination, is Abraham Lincoln.