Novelist Les Standiford shows his skill as a storyteller in this fast-paced history of Andrew Carnegie, Henry Clay Frick and the 1892 Homestead steel strike that kept organized labor out of the mills for 40 years.

A dual biography of Carnegie and Frick, the book follows the rise to power and wealth in America’s booming industrial age. Carnegie, a Scottish immigrant who rose from a clerk with the Pennsylvania Railroad to the head of Carnegie Steel and Frick, a rough and tumble self-made man who became “The King of Coke.” Coke, short for coal cake is the partially baked bituminous coal of Western Pennsylvania used in making steel. When Carnegie made Frick is manager, the hard-nosed Frick set about reducing wages and lengthening the workday and the  trouble began.  Much of the book focuses on the tragic events at the Homestead Works in Homestead, Pennsylvania south of Pittsburgh, where the powerful Amalgamated Association of Iron and Steel Workers sought to settle a dispute with Carnegie Steel.

Carnegie, chief stockholder in the company left the county for the Scottish Highlands, leaving company chairman Frick to settle the contract. Carnegie’s telegrams to Frick are filled with support and confidence in his chairman. What Carnegie did in effect was set Frick up to take the fall for what became one of the most violent labor disputes in American history,

Frick was combative. He ordered a lock-out of union members and built a wooden wall around the Homestead works dubbed “Fort Frick.” He then hired the Pinkerton Detective Agency to retake the mill and grounds after several thousand locked-out union members occupied the site. The ensuring “battle” saw at least eight killed, some historians think the number was higher, and hundreds wounded, mostly Pinkertons.

The Pennsylvania militia eventually restored order, but a Russian-born anarchist named Alexander Berkman shot Frick in his office, wounding him severely. In true Henry Clay Frick style, he refused medical treatment until he finished work for the day.

When the smoke of the Homestead Strike cleared, Carnegie claimed he could have brought the strike to a peaceful conclusion, in effect disavowing Frick’s handling of the matter. Frick never forgave Carnegie and in 1900, he was forced to surrender his share in the company for $1.5 million. Frick seethed with hate. He later sued Carnegie and won an out of court settlement of $31 million for his share in the company.

For the rest of their lives, the two would ignore each other but as he aged, Carnegie softened, perhaps hoping to make amends before he died. The story, perhaps apocryphal, is that Carnegie sent a note by messenger to Frick offering to meet. Frick is supposed to have crumpled the note and said to the messenger “Tell him I’ll see him in Hell, where we are both going.”

While the book includes a good index and a bibliography, Standiford uses the phrase “so the story goes” and often provided no footnotes. That aside, Meet You in Hell makes for a great read. 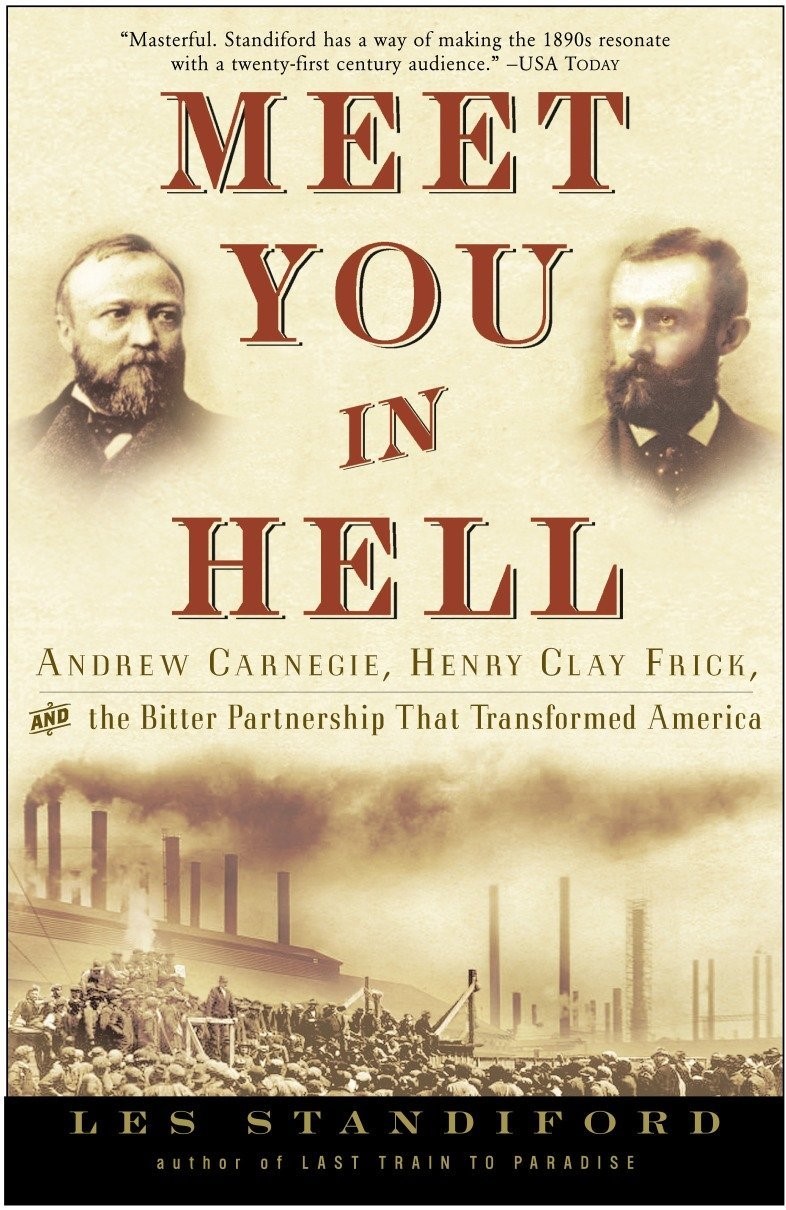