Book Review “The Death and Life of the Great Lakes, by Dan Egan (2017)

Book Review “The Death and Life of the Great Lakes, by Dan Egan (2017) 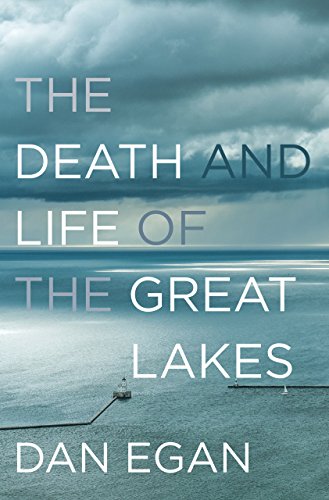 As anyone who has been to the Peninsula lately knows, this has been a very bad year for high water lake levels and resultant erosion. So I called a cousin who is a hydrologist, and asked him if it would make sense to lower the lake levels, by piping the water away to places that need it. He texted me this answer: “Have you read The Death and Life of the Great Lakes by Dan Egan?? They have tried all sorts of crazy engineered solutions over the years with the great lakes…most with disastrous results”.

I promptly ordered a copy and read It, so thus was my introduction to this important book. It is hugely relevant to all of us who reside in the Great Lakes drainage basin and depend on them for water, and so much else.  I encourage everyone with an interest in the history and ecology of the Great Lakes, to consider reading this also.

This book is two things. First, it’s a history of the human activities that have affected the great lakes. Secondly, it’s a metaphor for the law of unintended consequences. That is defined simply as results that occur, that one didn’t expect to occur.

These results can be either beneficial or disastrous .Much of what has happened on the lakes was in the latter category. As Murphy Law states, “Anything that can go wrong, will go wrong”.  For example, no one thought that the St Lawrence Seaway project would cause our native gamefish to be nearly wiped out by Lamprey Eels. Luckily, that problem was largely fixed. Unfortunately, the Lampreys were followed by a much bigger disaster that still festers, namely, zebra and quagga mussels. True, there was a beneficial unintended consequence to these – it made the water really clean for Scuba diving. However, one of the unintended negative consequences was that sunlight penetrated deeper, enhancing the growth of Cladaphora algae. As this dies, it causes ideal conditions for a botulism causing bacteria. In the early 2000s, this led to outbreaks of Avian Botulism which horrific fish and bird die-offs.

Here’s another example. Before reading this book, I never heard of The Great Black Swamp. This used to exist at the western end of the lake and stretched across Ohio, to Indiana. Back in the day, before the function of wetlands was understood, “the only good swamp was a drained swamp” so it was drained.  So yes, there was an intended benefit, namely some good farmland. However, this was far outweighed by the negative unintended consequence of removing what was essentially Lake Erie’s filter. As a result, immense agricultural runoff now grossly contaminates Lake Erie via the Maumee River. This contributes to Harmful Algae Blooms (HABs) of deadly microcystis that shut down the water supply of Toledo, Ohio in 2014.

This award-winning book describes many such unintended consequences in graphic, readable style. Luckily, the last chapter “A Great Lake Revival” ends on a somewhat positive note. Some endangered native fish are making comebacks. For example, Whitefish appear to have evolved to eat zebra mussels. Who would have thought?

Let us all make the reading of meaningful books such as this, be an intended consequence of our unintended COVID-19 quarantine. I heartily recommend this book for all with an interest in maritime history and environmental science. Actually, all of us should read this, because our very existence here depends on a healthy lake.