Michael Shaara’s novel about the Battle of Gettysburg, first published in 1974, won the Pulitzer Prize for Fiction the next year. The book has been republished many times and is on the reading list for many U.S. Army officer programs as well as other military academies. The book was also the basis of director Ronald Maxwell’s 1993 movie Gettysburg.

The novel follows four main characters, two Confederate and two Union. Robert E. Lee and James Longstreet on the Confederate side, John Buford and Joshua Lawrence Chamberlain on the Union side. Other characters are also featured, and side stories help fill out the cast. Written in the present tense and covering only five days from June 29, 1863, to July 3, the novel has a sense of urgency that is lacking in the prequel Gods and Generals and the sequel The Last Full Measure by Shaara’s son Jeff Shaara.

The story begins with the mysterious spy Harrison who first tells Lee and Longstreet that the Union Army of the Potomac, now under its new commander George G. Meade, has moved quickly and is close behind the Confederate Army of Northern Virginia. The Confederate invasion of Pennsylvania has suddenly a new threat to contend with.  As Lee’s army moves into Southern Pennsylvania the climax will take place at Gettysburg during the first three days of July 1863.

Shaara says in the preface “The interpretation of character is my own.” While none of his interpretations will disturb readers of Civil War history, they help add insight and a personal touch to these soldiers. The reader gets to know them through their thoughts and conversations, also fictionalized, with other characters.

It is hard not to notice an almost apologetic tone when dealing with the Confederates. “The Cause” is not about slavery, its about “rights”.  Union cavalry Gen. John Buford’s war weariness and fatigue are very real, especially in an army that has suffered defeat after defeat at the hands of Lee’s victorious army. Col. Joshua Lawrence Chamberlain, commander of the 20th Maine regiment who will hold the extreme left of the Union line on Little Round Top, is a college professor turned soldier and looks for some deeper meaning to the war. Erie County’s own Strong Vincent is also a minor character in the novel. It is Vincent who paced his brigade on Little Round Top’s southern face, leading to Union victory there.

Confederate Gen. James Longstreet is portrayed, accurately, as a man who doubts Lee’s aggressiveness at Gettysburg. Longstreet did not want to fight there, but Lee was determined. Their disagreements are respectful, but Longstreet has his doubts.

The majority of the novel focuses on only three parts of the battle, one on each day of the struggle. On July 1st, the first day, the focus is on Buford’s cavalry division that meets Lee’s somewhat hesitant assaults and buys time for the Union army to concentrate. The second day’s action is told through the eyes of Col. Chamberlain’s 20th Maine on Little Round Top. Truly a brave and determined stand, little or nothing is said of the fighting that engulfed the entire union line that day. This is one of the book’s strongest parts.  The Little Round Top chapter is riveting, if focused on only one small part of the battle.

Day three brings Pickett’s Charge on the Union center. Flamboyant Confederate Gen. George Pickett leads his division (and others) in a doomed assault that ends the battle and results in a Union victory and Lee’s retreat back to Virginia.

There is no doubt about the long-term effect the novel and the subsequent movie Gettysburg have had on the American public’s perception of the and battle. Shaara made no attempt to tell the whole story of Gettysburg. He chose to focus on certain participants and leave the rest to the historians. The 1993 movie led to a surge in visitation to the battlefield, especially to Little Round Top. Ken Burn’s The Civil War on PBS and a veritable slew of books about the battle have followed.

Michael Shaara saw little of this, dying in 1988 at age fifty-nine of a heart attack. When I met Shaara in 1987, he spoke at length about his own heart problems and felt this played a role in Lee’s actions at Gettysburg. Lee died of a stroke in 1870 and there is no lack of accounts about his health during the Gettysburg campaign.

In the end, The Killer Angels is a novel, but a great one. It ranks with Stephen Crain’s The Red Badge of Courage (1895) as one of the great novels of the Civil War. If you have never read it, give it a try. If you have read it, read it again. 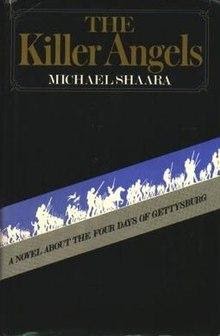