In 1915, Carl Benz was a German-American who, although having formally declared his citizenship intentions, was still years from becoming a U.S. citizen. He was gainfully employed as a butcher at Haibach Brothers Meat Packers at 918 Parade Street in Erie. Then suddenly, the U.S. declaration of war against Germany had flipped the climate in the U.S. against immigrant Germans (and even resident German-Americans). The mood changed from welcoming to skepticism, then outright persecution.

By the war years of 1917-18, Carl had registered himself in the U.S. draft and had established his own meat market at 1103 Cascade Street in Erie. But German heritage had now become a liability. It seemed that he had challenges to face beyond those of daily living and working. 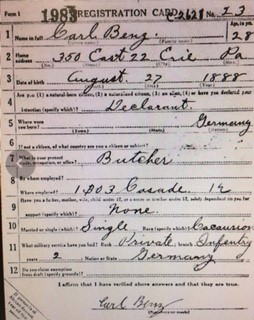 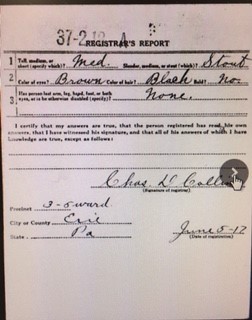 The U.S. declaration of war against Germany led to the most challenging, and even humiliating, experience suffered by any ethnic group in the U.S. up until that time. The extent of anti-German and anti-German-American hysteria ranged from trivial and ridiculous to damaging and devastating.  The following steps were taken at the Federal level, all of which were directed toward German-Americans: 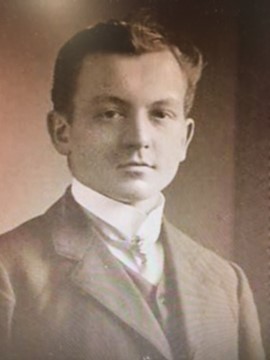 Throughout the nation, there were instances of violence against German-Americans - tarring & feathering, dunking, having houses painted yellow or having them burned, or being forced to buy “Liberty Loan” bonds as proof of their loyalties.  By 1918, the violence was increasing with more beatings, shootings and even lynchings.

And what about Erie? Did Erie’s mood match the national frenzy against German-Americans? Had Carl Benz escaped Germany just barely before World War I began only to face discrimination and the persecution of German-Americans in Erie?

To our immense relief, Erie did not follow the national trend.

On the day that war was declared, Erie’s Mayor Kitts issued a statement announcing that “foreign individuals and their property would be protected so long as one go(es) peaceably about his business and conducts himself in a law-abiding manner.”

Local experts claim that most of Erie’s Germans suffered no persecution at all. Germans were the single largest ethnic group in Erie - between 36 and 44 percent during the World War I years. And, Germans dominated Erie politically - Erie had had a string of six consecutive German-American mayors since 1900.  And some forty-eight percent of Erie’s city councilors were of German ancestry in the period from the 1880s to the 1920s.  This large and influential proportion of Germans in Erie may have provided insulation from the negative actions taken elsewhere in the nation due to the war.

German-American organizations were central to Erie’s social life, providing clubs, singing societies and cultural city-wide entertainment.  Since the 1830s, their numbers were so great that they had founded their own churches here (including St. Mary, and later St. John and St. Joseph) and had opened Erie’s first parochial schools.  Most of Erie’s German-Americans were skilled tradesmen and merchants who opened small shops for which they were well-known in town.  Carl Benz was no different in this regard. He went on to open several successive butcher shops in Erie, to marry and to have a large family.

In the early years of his life, Carl Benz saw at least two monumental strokes of good fortune and good timing.  He escaped from Germany a mere six months before the European War began. And he found shelter and welcome in a little town called Erie where he would remain safe from the persecution of that period as faced by other German-Americans in the nation.