In the year 2020 it is a time to reflect on where we are as a nation. Over the past several years, Civil War monuments across the United States have been removed, torn down and vandalized, particularly in the American South. A notable exception is the vandalism of the monument to the 54th Massachusetts Regiment, the first African American regiment formed in the North. Created by artist Augustus Saint-Gaudens on Boston Common, unveiled in 1897. This beautiful monument is part of the Boston African American National Historic site in that city.

The 54th Massachusetts monument is just one monument to Civil War soldiers to be vandalized or in one way or another removed or defaced. This brings us to wonder about the Civil War monuments in our own region. We, from Northwest Pennsylvania, “Yankees,” do we really understand how Southerners feel? The answer is no. We do not share the same passions, history or background as they do. This is not about “heritage not hate” but about remembering history.

As we commemorate Veterans Day, 2020, many emotions fill our minds. Should we teach and remember history, event if is bad or wrong? The basic study of history demands we look at the events of past as the people of that time looked at it, not from the perspective of today. The monuments to the soldiers of the Civil War were erected at a time when passions were still strong.

In the years following the Civil War, groups of Union veterans in the North formed the G.A.R., The Grand Army of the Republic. Their goal was to remember the service of Union soldiers and sailors in the Civil War. A similar organization was formed in the South. Monuments were erected in town squares and later in National Battlefield Parks around the country. The men who fought were proud of their service, as were their communities and families, and rightfully so, Veterans had fought and died on many battlefields from Gettysburg to Chattanooga. No matter what side they fought for, we of today should be permitted to debate all history. The ugly and the beautiful. 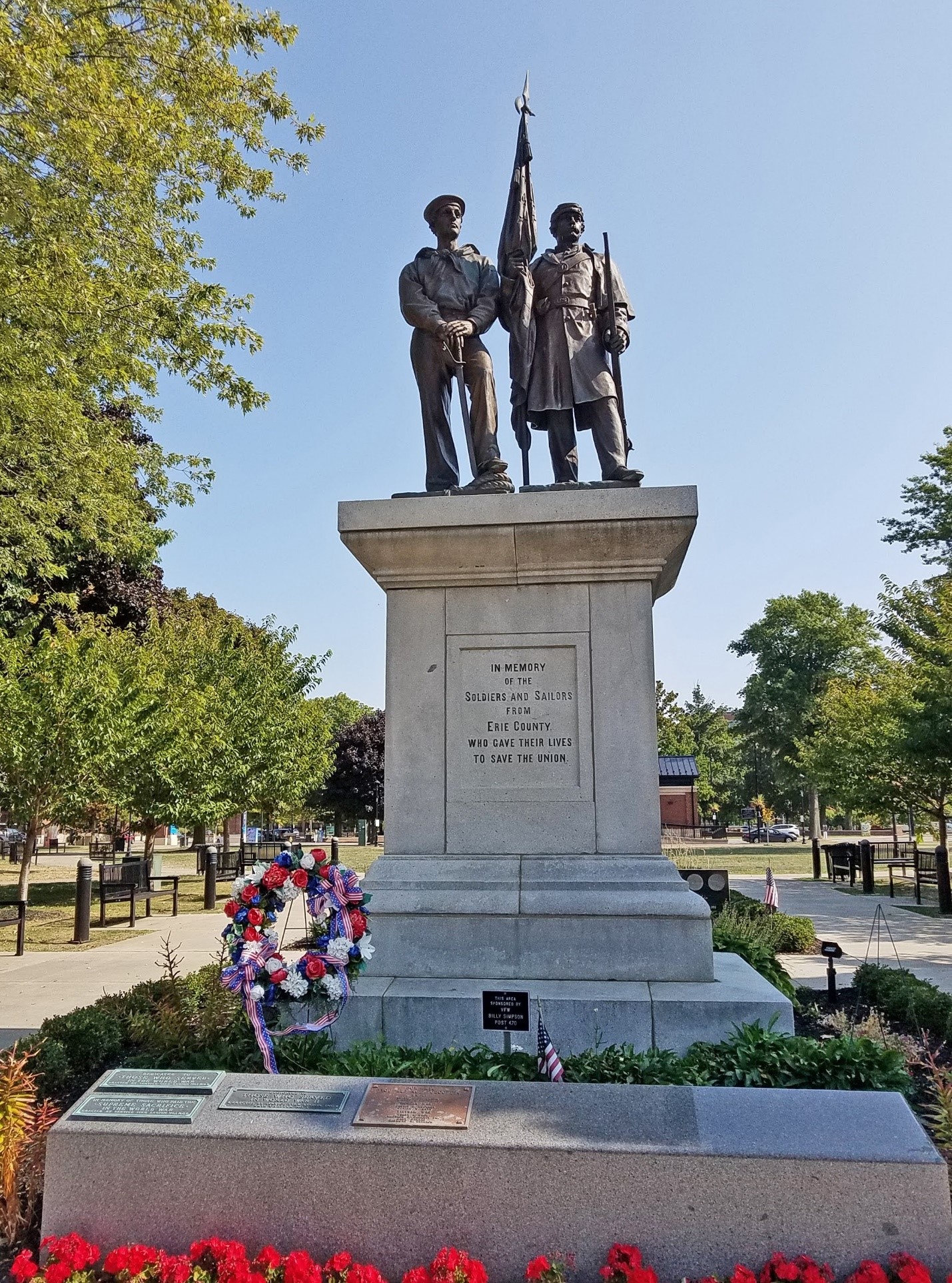 A large monument in our Erie region is the Erie Civil War monument in Perry Square in Erie, Pennsylvania. Erected in 1872 and officially dedicated in 1939, the monument depicts a soldier and a sailor. The dedication was witnessed by many surviving veterans. 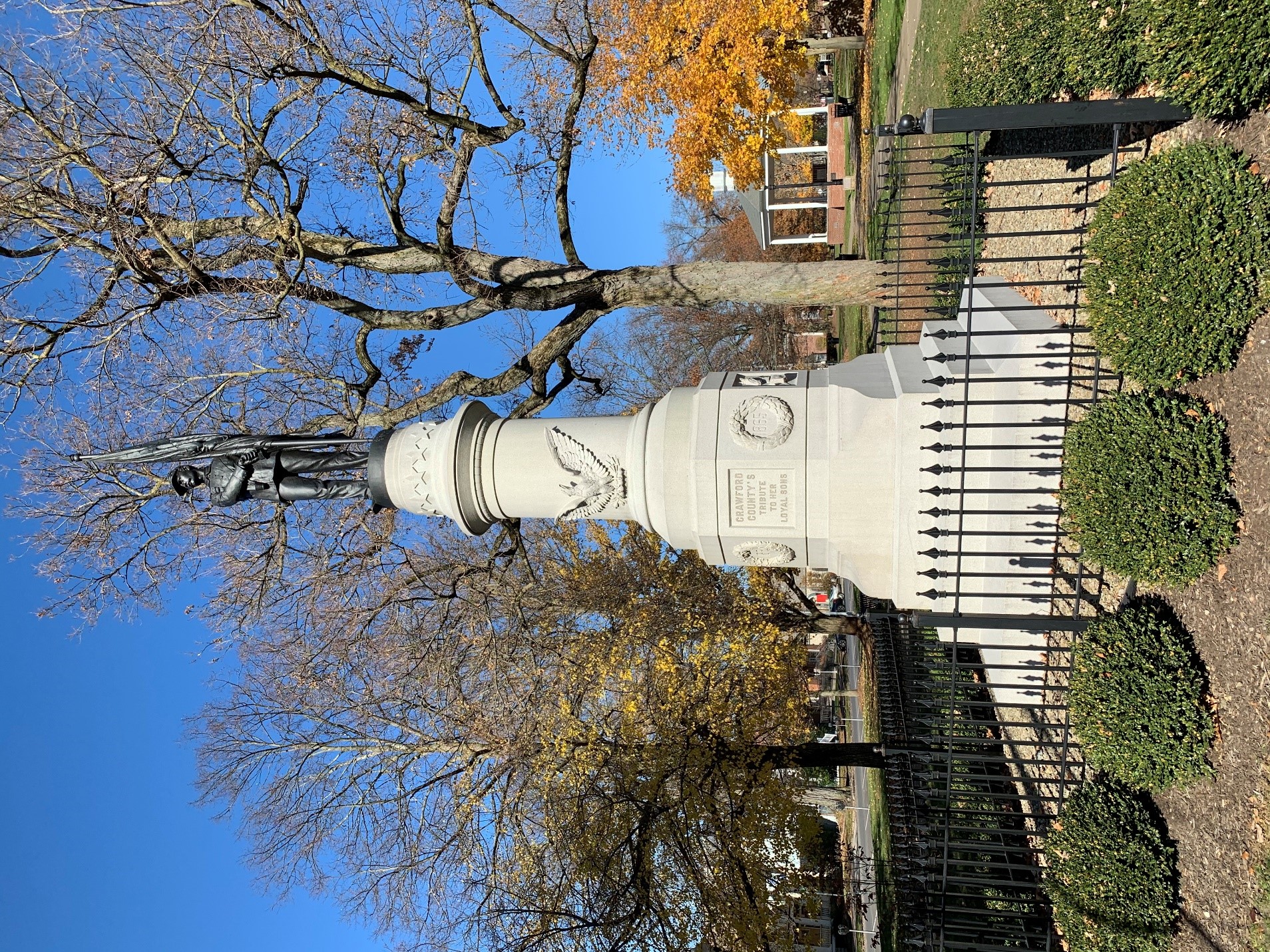 In Meadville, the county seat of Crawford County, Pennsylvania, a monument erected in 1890 is topped by a bronze figure depicting Sgt. Samuel Peiffer of the 150th Pennsylvania Volunteers about to draw his sword in defense of the flag he cradles in his arm at Gettysburg in 1863 where he was killed.

So, what is to become of these monuments? As we observe Veterans Day, 2020, flags will be placed at headstones of all veterans, including those of the Civil War, honoring the men and women of all races who have served this country. It is a time to reflect. Let us commemorate but not glorify their service in war and remember their sacrifice. Let us remember our history, all of our history, the good and the bad.