The O&P season opened on April 30, with Erie travelling to Sharon. Erie/Girard's starting lineup was:

They managed only four hits in falling 4-1. Their leadoff hitter, "Shotten," was none other than Burt Shotton, who would be signed by the St. Louis Browns the next year, and go on to play almost 1,400 games in 14 seasons in the majors, eventually becoming an assistant to Branch Rickey with the St. Louis Cardinals. In 1947, when Rickey was general manager of the Brooklyn Dodgers, Leo Durocher was suspended as manager. Rickey asked Shotton to become interim manager of the team, including the rookie Jackie Robinson, who became the first Black player in the major leagues since the 19th century.

Baumeister and Koster ran the new team, called the Sailors, under the name of the Erie Entertainment Company, while continuing to maintain the old Fishermen team in the Interstate League, to keep Rinderknecht from taking over the territory. The Interstate struggled on into 1908, finally collapsing on June 7, with most teams having played fewer than 20 games. The Fishermen, who had resorted to playing their home games in Corry, were in last place. Ten days later, the Sailors, who had been playing home games in Butler, relocated to Erie. The established teams in the O&P apparently outclassed the Sailors. Their play eventually improved, but not enough to get out of the cellar. They finished at 42-79, 41 games back of Akron. The O&P season also ended early, the owners blaming high salaries and a business depression. 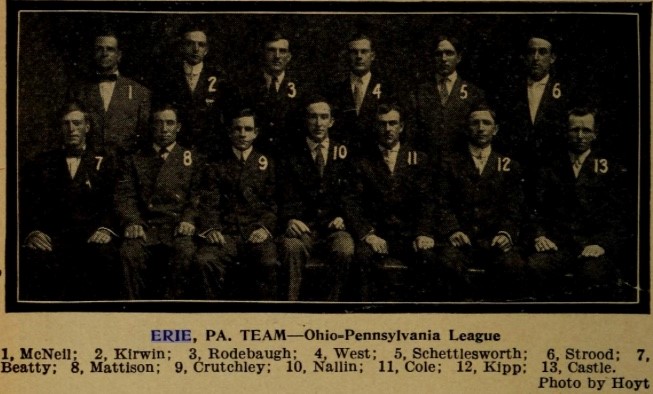 After the 1908 season, Baumeister and Koster, who had had enough of the baseball business, sold their franchise to auto dealer Jacob Roth and Charles Mertens, a lawyer and former state representative. Matty Broderick helmed the Sailors the next two years. He also played shortstop. The 1909 team lacked hitting, combining for a .206 batting average, and finished in sixth place with a record of 48-69, 31 games back of Akron. Bob Shuttlesworth pitched a 16-inning complete game against Canton in a losing effort.

While the team posted more wins the following year, and was in first place for two months, they finished last, with a record of 55-69. The one bright spot that season was the pitching of 20-year-old Ralph McConnaughey, who posted a record of 16-18. On July 24, they battled New Castle for 17 innings before the game was called a draw, 5-5.

The new owners built Perry Field, at West 10th and Weschler Street, which was dedicated May 5, 1910. According to the 1911 Baseball Blue Book, it seated 4,500 fans. Newspaper reports marveled at the quality of the field and the grandstand seating.

The Sailors finally made it out of the second division in the O&P in 1911, managed by Billy Gilbert, former second baseman for the NY Giants, and with McConnaughey winning 22 games, but still finished 12-1/2 games behind Akron, with a record of 77-54. This was Erie's final campaign in the O&P. The league had a disappointing year, with poor attendance. Two of the eight teams folded, and a third had to be moved.

The Sailors jumped ship to join the reconstituted Central League, along with three of the Ohio teams from the O&P. While the Central was upgraded to Class B, the O&P was demoted to Class D in 1912. Before the season concluded, half the teams in the O&P had disbanded, and three of the other four had moved.