Little is known about the Native American tribe that gave its name to Erie, Lake Erie and a county in three states. They were gone when the first settlers of European descent arrived in the region. What happened to the Erie or Eriez tribe?

What is known is that a people the French in Canada called the” People of the Cat” or “Chat” (probably referring to racoons or panthers) were eastern Woodland Indians that lived on the southern shore of Lake Erie in Western Pennsylvania, Eastern Ohio and Western New York. They are considered an Iroquoian group that lived in clusters of large, long houses, surrounded by palisade walls.

They grew “the three sisters” corn, beans and squash. Each of these would have been grown in plots a modern gardener would consider messy or cluttered, but each plant provided something the others needed. For example, the beans used the corn stalks to climb and nitrogen for the soil was provided by the squash. The broad leaves of the squash in turn protected the bean plants from predators. They lived off of these and other crops during the warmer months and off of game and stored vegetables in winter.

The Erie were often at war with other native American tribes, mostly over the fur trade. The long-running Beaver Wars began in the early 17th century when the usual trading with neighboring tribes declined, and warfare increased. By the mid-1650s, the Erie had begun to disperse. Some believe southward, some to Canada, or be absorbed by the powerful Iroquois in modern day  New York state. The Iroquois, being further east, had developed trade with the European settlers along the Atlantic coast and had more powerful weapons available to them. 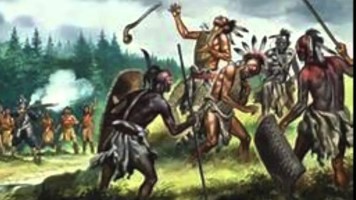 Today, Chautauqua is thought to be the only Eriez word to survive and its origin in unknown. Today, the Ft. LeBoeuf Museum in Waterford, PA can help visitors understand this lost people of our region.