USS Michigan as she would have appeared in 1853.

Timber Pirates? On the Great Lakes? Yes, timber pirates. What was a timber pirate? In the early days of America’s westward expansion, the United States government held vast areas of timbered land on the upper (western) Great Lakes and elsewhere. Loggers who illegally cut down the trees on federal lands and sold them were known as timber pirates. They were an especially violent bunch, much like a modern drug cartel or the pirates of lore, sailing the Great Lakes instead of the Caribbean. Federal law enforcement could do little to stop them, and they were quite adept at intimidating the locals and informants. The United States Paddle Frigate Michigan would soon join the fray.

Assembled in Erie from sections made in Pittsburgh, Michigan, the first iron hulled ship in the U.S. Navy, was launched in Erie on December 5-6, 1843, and commissioned in 1844. The ship was 164 feet long, 27 feet wide and carried a crew of 88-120 officers, men and Marines. The ship had her faults, her flat bottom made be prefect for shallow coastal waters and narrow inlets but also made her a bit difficult to maneuver is certain winds. The ship’s two side paddle wheels were also a potential weakness. Intended to be America’s answer to a demilitarized Great Lakes after the War of 1812-both the United States and Britain were to have only one armed vessel on the lakes. Michigan’s armament, which changed often through her service, combined with her steam-powered speed of 12-13 knots made her a formidable warship.

Much of Michigan’s career was spent rescuing ships in distress on the upper lakes. As many as thirty-six ships were saved from destruction by Michigan between 1844 and 1903. The ship wintered in Erie, where a stout wooden roof was built over the weather deck for the crew’s comfort in the cold Erie winters, while the officers mostly lived ashore in hotels, private homes or a government owned hotel. So many Michigan (later renamed Wolverine in 1905) sailors married Erie girls, the city became known as “the mother-in-law of the Navy.”

In April, 1853, Michigan set sail for he first cruise of the year. Unknown to all aboard including her Captain, Commander Abraham Bigelow, the ship was headed to the site of the timber smuggling on the Great Lakes-Chicago and Milwaukee on Lake Michigan. Steaming from Lake Erie into Lake Huron via the St. Claire River, at 2:15 am early on May 6, 1853, Michigan’s lookouts sighted a light of another ship heading directly at her. Soon to be described as a “propeller,” the unknown ship movements seemed to match Michigan’s in every way. Every attempt by the crew at the wheel and the officer of the deck, Lieutenant George M. Ransom to avoid collision with the “Propeller” was answered with the rouge ship steering toward Michigan. At about 3:00 am the “propeller” rammed Michigan port quarter. The ship’s crew were awakened by the crack and the call to “general quarters.”

Captain Bigelow still believed the collision with the propeller driven steamer Buffalo, the largest on the lakes, to have been an accident. Michigan’s iron side  was smashed in, but the crew reported there were no leaks. The wooden quarterdeck was a jumble of timbers and broken deck planking, but because she was made of iron, not wood, Michigan soon gave chase. Bigelow, still believing the collision to have been an accident, was angry that the culprit had not asked if his ship needed assistance. As Michigan neared the steamer, her name Buffalo was seen on her stern. When Bigelow asked if they needed assistance. The reply was curtly negative. Still thinking the ramming had been an accident, Captain Bigelow let them go. It was not until Captain Bigelow interviewed Lt. Ransom who was convinced the movements of Buffalo that night had been intentional, did he change his mind. After repairs in Chicago, the heart of the timber revolt, Michigan returned to Erie for further repairs. By mid-August, she was again sailing to the western lakes. 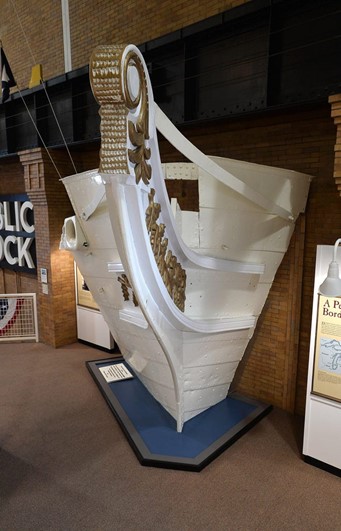 Bow of the USS Michigan/Wolverine in the Erie Maritime Museum.

This time, Michigan docked at Kalamazoo, Michigan and there, collaborating with local federal marshals, did make a few landings with her Marines resulting in some arrests but little came of it, and most were quickly set free. The Timber Barons had set their sights on Congress and by the end of 1853, laws concerning the federally protected timber of the western lakes were turned over to local agencies and the logging resumed.

On October 6, 1853, The Chicago Tribune reported that Michigan has been stranded in a storm on Lake Michigan and presumably lost. Captain Bigelow wrote to his superiors in Washington that the story was the result of “malice” on the part of the Timber Barons and the newspaper. Michigan was safe.

The Timber Wars proved that fast, iron vessels were needed on the lakes to stop the piracy. The Department of the Treasury-responsible for the Revenue Service  had six new cutters built to deal with piracy on the lakes. The U.S. Paddle Frigate Michigan returned to her regular patrolling duties.

Today, the iron prow of the USS Michigan/Wolverine is on exhibit at the Erie Maritime Museum and exhibit there and on the campus of the Hagen History Center highlight the ship’s story.