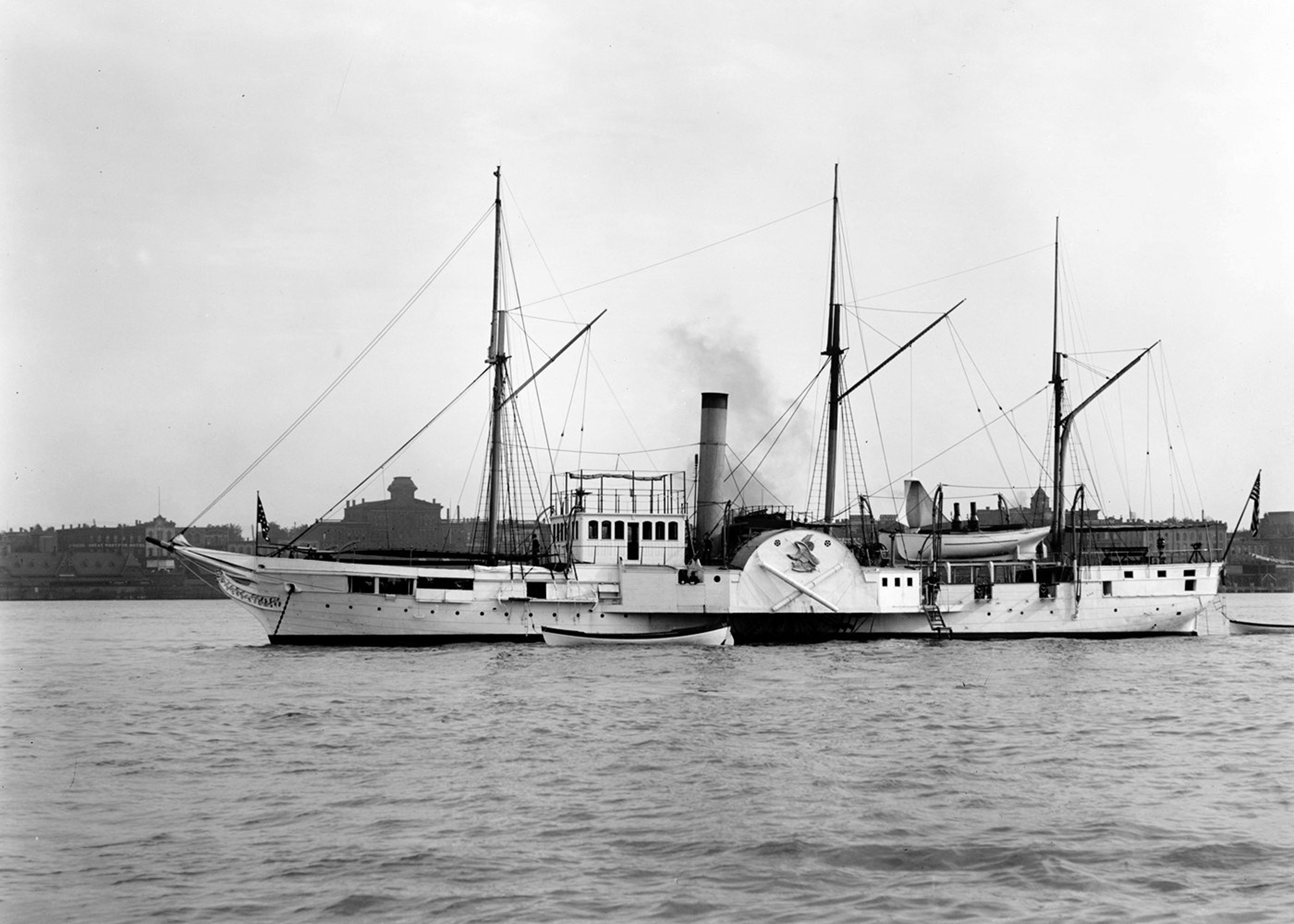 The third longest continuously serving ship in the United States Navy after Constitution and Independence, some sixty-one years as Michigan and seven as Wolverine, USS Michigan would see many changes as the nineteenth century gave way to the twentieth.

Michigan was launched in 1843 and commissioned in Erie in 1845.  She was the first iron-hulled ship in the US Navy. Her entire service was on the western Great Lakes, and her home port was Erie. So many sailors from the ship married Erie girls, the city became known as the “mother-in-law of the navy. At least fifty-five officers of the ship married Erie women, and it can be assumed that the same was true among the enlisted ranks as well.

The officers and crew complained about Erie’s bitter winters, a period they called the “stationary period.” Officers lived ashore at hotels, like the Reid House, formerly the U.S. Hotel or in private homes. Some officers, like Surgeon William M. Wood even built homes. In 1849, Wood even hosted his wife’s uncle President Zachary Taylor in his home in the city (not the house on West 6th currently operated by the Hagen History Center built in 1858.) Officers made as much as $200 a month for sea duty and $165 a month during the winter shore duty. Enlisted sailors made between $10.50 and $65 a month depending on their rank.

Life aboard Michigan quieted considerably after the Civil War. A monotonous routine of polishing and painting, the same on every ship in every navy, consumed most days. Big changes came in 1905, the Navy Department changed Michigan’s name to Wolverine. The navy had begun to build battleships. Each was named for a state. The wolverine is the state mascot of the state of Michigan and the name was consider fitting for a warship. In May, 1912, USS Wolverine was decommissioned and loaned to the Pennsylvania Naval Militia, a branch of the U.S. Naval Reserve. 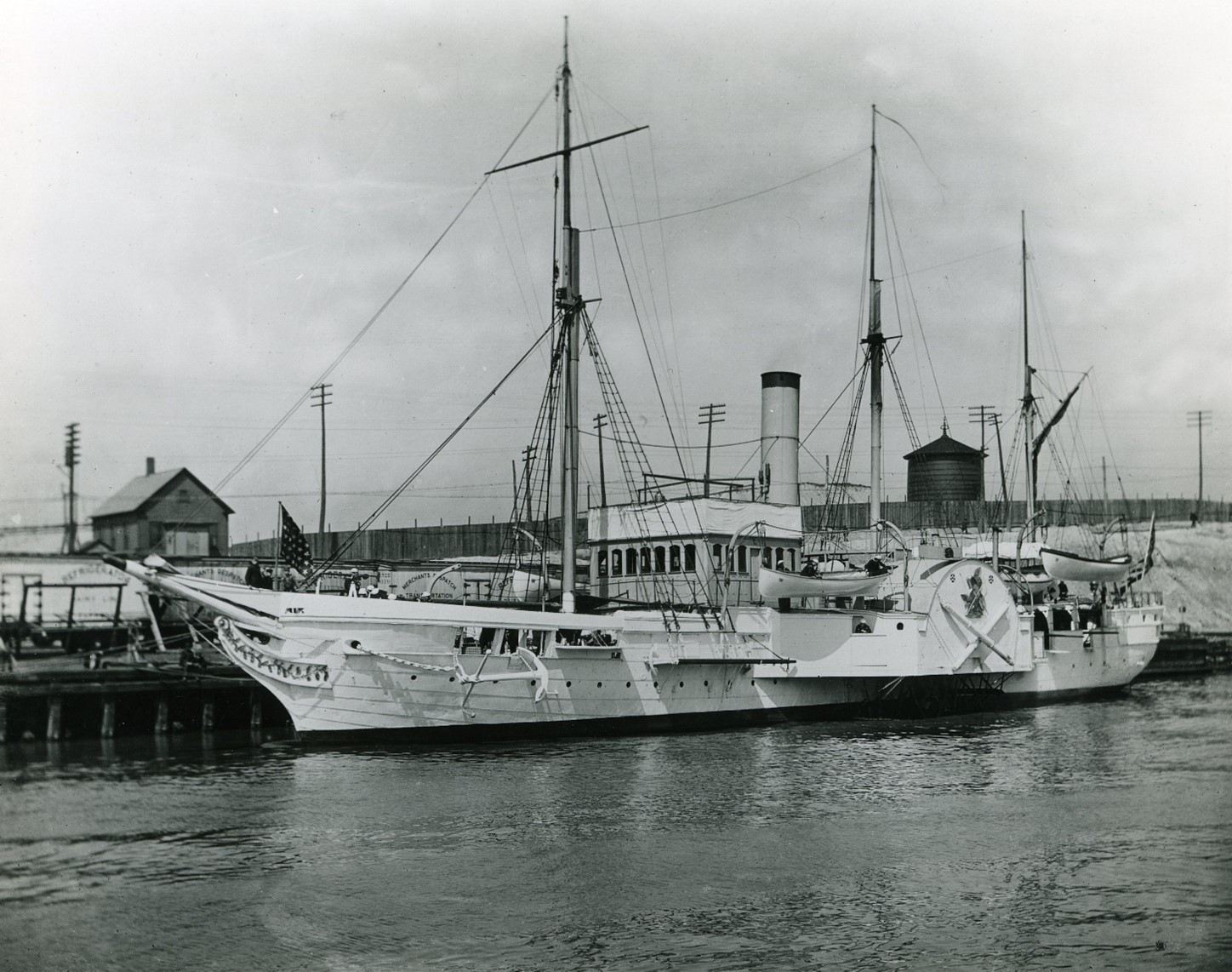 In 1912, Erie was preparing for the 100th anniversary of Oliver Hazard Perry’s victory at the Battle of Lake Erie in 1813. Plans were devised to raise the remains of Perry’s second flagship, the brig Niagara, from Misery Bay on Erie’s Presque Isle where much of his fleet had been scuttled at the end of the War of 1812. Lt. Commander William L. Morrison, captain of Wolverine, was authorized to send a diver into Misery Bay and find the ship. In March, 1913, a section of hull has raised, and Morrison proclaimed it Niagara. It may or may not have been the correct ship (not much remained after 100 years), but Morrison supervised the reconstruction. No plans for the original brig were to be found-and still have not-so a typical 20-gun brig was built. Wolverine would tow the ship around the Great Lakes in the summer of 1813, commemorating Perry’s Victory.

That commemoration was to be Wolverine’s last hurrah. The rebuilt Niagara was returned to Erie and sank through neglect. Michigan was used periodically as a training vessel for the Pennsylvania Naval Militia, but during her final voyage on Lake Michigan, the port connecting rod broke. The damage proved too expensive to fix on a ship that was past its prime. In 1926, the U.S. government offered Wolverine to the city of Erie as a historic ship tourist attraction like Constitution in Boston or Constellation in Baltimore, but a study done by the Erie County Historical Society determined the cost of repairs and yearly maintenance would be prohibitive. The city of Erie believed the navy was trying to dump their junk on the city. During the 1930s, the ship, anchored in Misery Bay deteriorated rapidly. The brass was stolen, the wood rotted, and the iron hull grew dingier and dingier. During WW II some suggested she be sold for scrap, but President Franklin D. Roosevelt saved her for a time. In 1948, however, it was decided she should be scrapped. In 1949, Wolverine was pumped out and found to be virtually free of leaks, but that would not save her. As she was towed across Presque Isle Bay to the scrap yard, the Wolverine rammed and swamped the launch towing her. At the scrap yard a ten-foot-tall section of her prow was cut off and later placed in a park named for her on State Street just south of the concrete cradle the third Niagara would be placed in 1963. Today, that section of prow is all that remains, and it is on exhibit at the Erie Maritime Museum in Erie, Pennsylvania.

The Hagen History Center and the Erie Maritime Museum both house exhibits in the USS Michigan/Wolverine. Visitors are welcome.