On September 4, 2021, the house that had been located at 511 Chestnut St, Erie PA, was demolished. While it was determined that the building had no significant historical or architectural importance, one of its inhabitants was certainly noteworthy in Erie history.

Clark Olds Tayntor was born in Barre, Vermont, scion of an old New England family with deep colonial roots. It is uncertain exactly when his family moved to Erie, but he listed 511 Chestnut as his residence on his draft notification in 1917, as the US prepared to enter the First World War. At that time, he was enrolled in Harvard Law School, and had previously graduated Yale in 1915. Following his military service, he ultimately returned to Harvard Law and graduated in 1924.

While his career as an attorney was noteworthy, He is most famous for his military service. When the war broke out, he enlisted, and was accepted at Officers Training School. Following graduation, he was commissioned as a Second Lieutenant of Infantry, and was assigned to the 4th Division, 7th Brigade, 47th Infantry Regiment, Company M. The 4th Division was one of the first US divisions to “get into the fight” and from July 28-August 6, the Division fought in the massive Aisne -Marne Offensive.

By that time, he was a First Lieutenant. On July 29, at Sergy, France, his actions earned him the Distinguished Service Cross (DSC), the US Army’s second highest decoration for gallantry in action.  The citation, General Orders 66, WD, 1919 reads as follows:

“For extraordinary heroism at Sergy, France, July 29-30, 1918. Disregarding two wounds from shell fire, which he had suffered, Lieutenant Tayntor continued in the advance with his platoon, keeping his men well organized, directing the consolidation of the line throughout the night, and refusing medical attention until all the wounded men in his platoon had received treatment”.

His military records note that his wounds were “severe”. Besides Lieutenant Tayntor, there were only 7 other winners of the DSC from Erie, in World War I. To place that in perspective, an estimated 3,500 to 5,000 Erieites served during the war. The citations describing the actions that won them their awards are in the recent book “Answering the Call: Erie County Pennsylvania in World War I”. Since he was wounded, LT Tayntor would have also been eligible for the Purple Heart Medal, established in 1932. He would have also been eligible for the WWI Victory Medal with at least the bar for “Aisne-Marne”. He participated in the occupation of Germany, but the Occupation Medal was not established until after his death. He resigned his commission in 1920.

Following the war, he completed Law School, returned to Erie, and practiced law. Details regarding his legal career are included in “Memoirs of the Erie County Pennsylvania Bench and Bar, Volume II”, by Tim Riley. It is interesting to note that he is not included in the book, “Erie County Pennsylvania in the World War 1917-1918 published in 1920. However, his citation and those of the other Erieites who won the DSC (although not Sergeant Joseph Coffey) are in the book “Heroes All”, 1919, edited by Harry Stringer.

Postwar, he endured personal tragedy: His wife, Mary Wheeler Tayntor (1894-1936), apparently spent 4 years at the Warren State Hospital, where she died of Pulmonary Tuberculosis in 1936. Ironically, she was interred on November 11- Armistice Day- at the Waterford PA cemetery. Their daughter, Julia Forrester Tayntor Wesmiller (1928-2007), resided in Erie. He continued to reside at 511 Chestnut at least until 1934. At the time of his death, March 23, 1941, he resided at 420 Peach St. First Lieutenant Clark O. Tayntor is interred at the Erie Cemetery, next to his brother Lewis. His parents Eugene and Inez Olds Tayntor are also interred in the Erie Cemetery, although not alongside him.  Plans are being discussed to construct a memorial to his memory on the lot at 511 Chestnut. 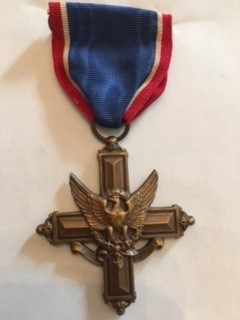