Editor's Note: "Formidable Erie County Women: Elizabeth Battles, Former Battles Bank in Girard Stood Alone triumphantly during Great Depression " was originally published by the Jefferson Educational Society. This publication, and others, along with video presentations, are available at JESErie.org.

There is no doubt the closing of the world’s markets during 2020 will have a devastating impact on the world’s economies. Looking back to the Great Depression and reading the analyses of what went wrong does not provide a clear, unequivocal answer to what caused the economic crisis that began with the fall of the stock market on Oct. 24, 1929. 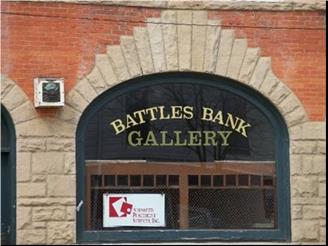 Some noted economists, such as Milton Friedman, argue that the Great Depression was caused by the banking crisis, which came in the wake of the fall of the stock market. Within a short period of time, one-third of all U.S. banks failed, or went out of business, causing an estimated 35 percent contraction of the money supply. At the time, the United States was on the Gold Standard and obviously there was no ability of banks or the federal government to provide gold to meet the total amount of deposits.

In reading the historical descriptions about the run on the banks, it appears that the panic was caused by fear and its contagion. Fear-possessed depositors stormed the banks for their money and the banks folded. Although the run on the banks began in 1929, the greatest stampede to secure cash came in 1933 on Thursday, March 2 and Friday, March 3. Of note, roughly 650 banks had failed in 1929 in the wake of the economic collapse. By the following year, that number had more than doubled.

On March 4, 1933, Franklin Delano Roosevelt was sworn into office as President of the United States. Immediately that evening, Roosevelt contacted all the governors and obtained their agreement to a federal order requiring all state and federal banks to close and to cease all banking transactions. In addition, the New York Stock Exchange was shut down.

On March 9, the Erie Daily Times printed the following description of the one exception in Pennsylvania:

The R. S. Battles bank . . . is in a class by itself during these hectic days of money famine. The bank, it is believed, is the only one in the state and one of the few in the country which remained opened for business during the past week. Explained C.F. Webster, cashier, “Our bank is a private bank and neither the state nor national government have any authority over it. . .There was no reason to close” (Domowicz, 143).

The fact that the R.S. Battles Bank did not close was picked up by the New York Times, which printed the following on March 11:

There has been no banking holiday as far as the Battles Bank in Girard is concerned. Business has been transacted as usual. Bank officials explained that the institute is neither a state nor a federal bank. It is private, operated on the same basis as a private or independent store (Domowicz, 143). 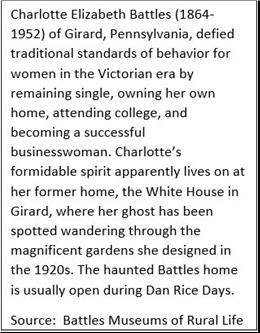 In Washington, D.C., when officials heard of the refusal of the Battles Bank to comply with the order to close, an order that the Bank comply was issued immediately. Charlotte Elizabeth Battles, the owner of the bank, sent President Roosevelt the following message:

Throughout the Depression, the R.S. Battles Bank never closed its doors and none of its depositors and investors ever lost any money. It continued to operate as a private concern and was open every business day during the Depression.

In early 1946, the R.S. Battles Bank closed its doors and merged with the Girard National Bank forming the Girard Battles National Bank. In that year, Charlotte Elizabeth Battles retired knowing that for 87 years, the Bank she ran had met the community’s needs (Domowicz, Girard, a Canal Town History, 145).

A depression today, similar in magnitude to the 1929 Great Depression, would have far less impact on the average depositor. It would not see a run on the banks or lead to bank failure.

One of the most important reasons is that the 1933 Banking Act adopted by the federal government created The Federal Deposit Insurance Corporation (FDIC), a federal corporation which provides deposit insurance to depositors in all banks. Thirty-seven years later, the federal government created the National Credit Union Administration to regulate credit unions. In 2011, the federal insurance limit for both FDIC and Credit Unions was increased to $250,000. 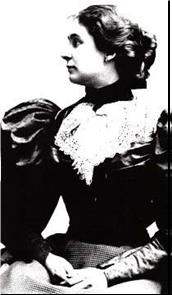 There is no doubt that COVID-19 will be disruptive to and destructive of the area, national, and world economies. Banks may fail as they did in 2008, but depositors should have little concern about securing the funds they have deposited.

Judy Lynch, Ph.D., is a Scholar-in-Residence at the Jefferson  Educational Society. She was named the Jefferson’s Decadean Scholar in 2018. She continues to serve on the Jefferson’s Board of Trustees and was its first chairwoman. From 2004 to 2017, sheserved as Associate Professor of Political Science and History at Mercyhurst University. From 2002 to 2004, Dr. Lynch taught atAllegheny College and was part of the Civic Engagement Institute. Prior, she worked as an analyst for the CIA and served for 20 years as Erie County Executive. She received her Doctorate With Distinction in Political Science in 2001 from the University of Pittsburgh and her M.A. in Social Studies from Gannon University. Her undergraduate degree, a B.A. in History and Political Science, is from George Washington University. 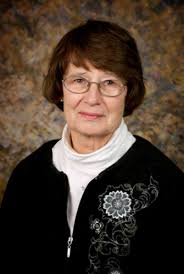