Found in the Archives!

Occasionally, a blog will appear called, “Found in the Archives!” so to assume any regularity is entirely irresponsible—but the Processing Archivist likes to think proactively so:

This week’s exciting, “Found in the Archives!” at the Hagen History Center is a once a month or two kind of find. A few months ago, the Processing Archivist found a vellum 1775 land deed with King George III seal still attached—maybe I will write about it sometime. Anyhoo, the attached picture as well as what the title indicates, a very rare and in good condition, photograph of Strong Vincent as a 2nd Lieutenant, in 1861 just after enlisting in the 90-day Erie Regiment. If you are unfamiliar or know very little of who and what General Strong Vincent did, here is your history lesson. Born in Waterford, Pennsylvania, in 1837, Strong’s name was derived from his mother’s maiden name. He graduated from Harvard University and began a career to “read law” in 1859, after returning to Erie, PA. After his first enlistment was up, early in the Civil War, he re-enlisted in Pennsylvania’s 83rd Volunteer Infantry, eventually becoming its colonel. Vincent tragically lost his life on July 7, 1863, as a result of wounds at Gettysburg’s Little Round Top. While he is a well-known general with Civil War historians, much of our community only knows about his existence via Strong Vincent High School (now Middle school), the majestic building along West 8th Street.

Here is some info on the care and preservation of the piece. This photograph was found in a box title, “1995” and with dozens of other boxes, the contents were placed inside in their respective years and forgotten about. While in an acid free folder and box, the environment this photograph has been in is undiscernible, unknowable even at the museum which did not have proper archive space until 2015. The general coloring indicates the bond used to place it on the backing is a preservation nightmare and will need to be addressed soon—insert a dry voice, but educationally thick, “Photographs like nothing on them but what was printed and temperature your body also can tolerate.” A free bit of an Archivists advice: If you are reading this and are keeping any kind of organic material to pass on to future generations, whether you donate it to HHC or keep them within family, heed the above sentence.

To end, who else looked at the photo and had their eyes magnetically pulled to those mutton chops!? If this article was about a random photograph found in the archives, those chops would have been my first priority. Their lusciousness is enviable. Our Instagram page is filled with archival finds and awhile back a photograph of a man was found (date unknown, yet it was a cabinet card so 1860-1890s roughly) who had a different style of facial hair but one that deserved to die out and while these chops are impressive, I think Wolverine wore them better. Go check out our Instagram page!

Link to an earlier article done by Jeff Sherry here at HHC: eriehistory.org/strong-vincent-what-death-more-glorious that has a little more in-depth history of General Strong Vincent. 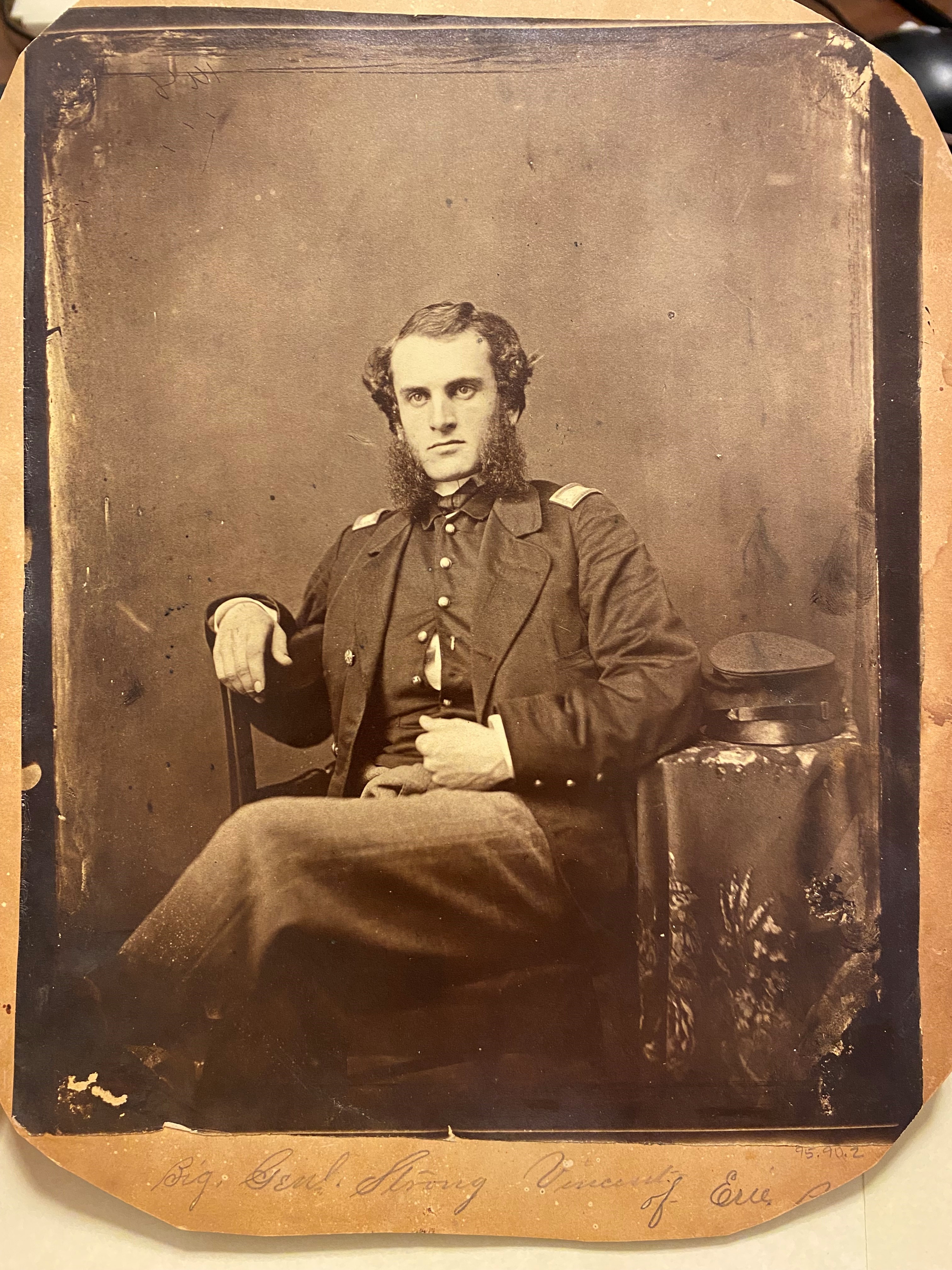