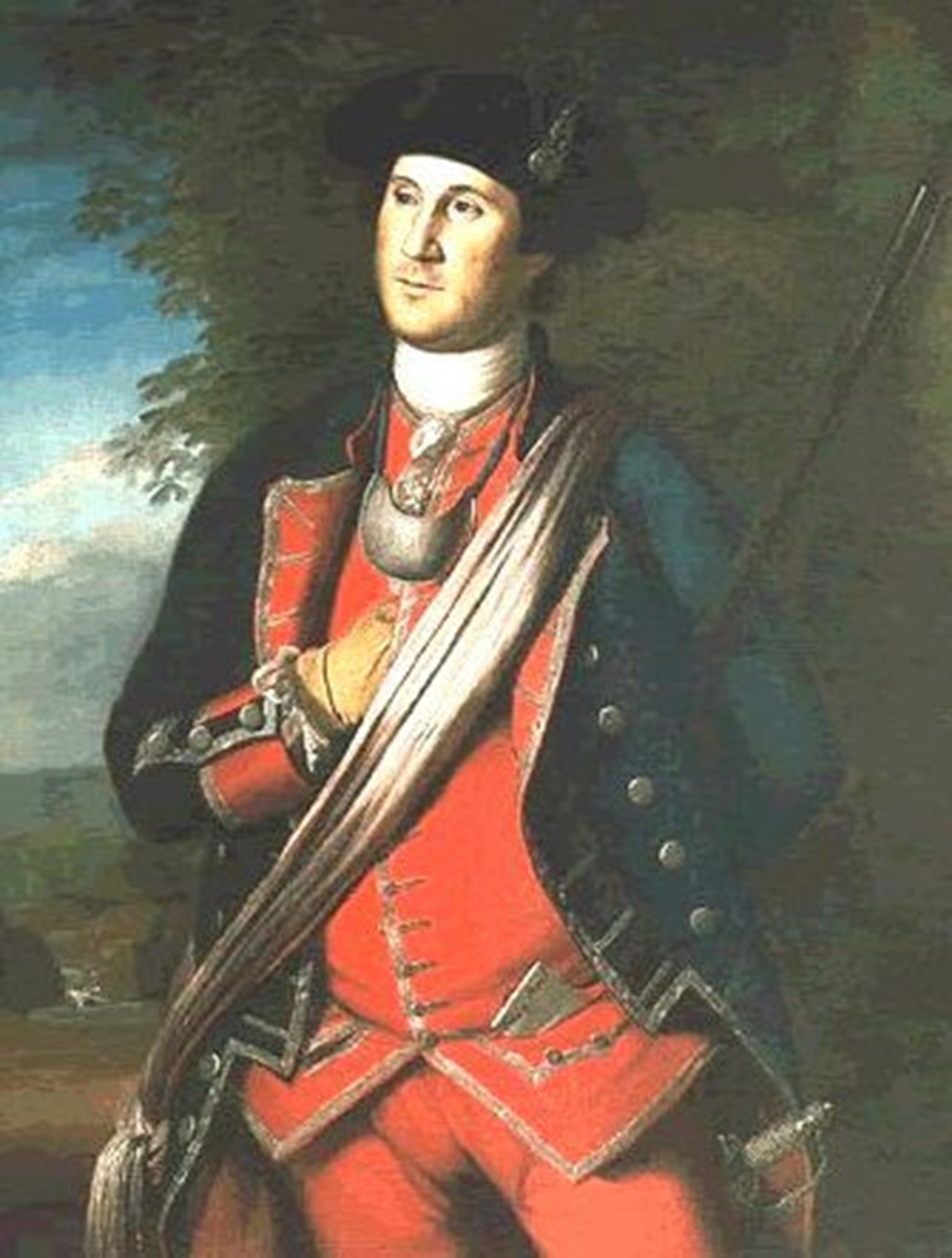 Washington’s mission was simple: tell the French to get out. The lands we know today as western Pennsylvania were claimed by the British and thought of as part of Virginia. The French, Britain’s main colonial rival, also claimed the region. Hoping to spread control over the Ohio country, meaning the Ohio and Mississippi watershed, the French who then controlled much of Eastern Canada, began building a string of forts and outposts that would link Canada and the Great Lakes to the Mississippi River and New Orleans to the west. In the Western Pennsylvania wilderness, the French began building forts. At present day Erie, Ft. Presque Isle was at the mouth of the bay. Nineteen miles to the south where LeBoeuf Creek meets French Creek, Ft. LeBoeuf was built. At the site of modern-day Franklin, Pennsylvania, Ft. Machault, was located where French Creek joins the Allegheny River and Ft. Duquesne at present day Pittsburgh where the Allegheny River joins the Monongahela River to form the Ohio River. These forts would ensure the safety of trade and the French claim to what was called “the Ohio Country.”

Learning of the construction of these outposts, Virginia’s Lieutenant Governor Robert Dinwiddie planned to send a messenger to the French in Western Pennsylvania, telling them to leave. The land there belonged to Virginia, thus Britain. It was no secret that Dinwiddie had a personal stake in the mission. He and many other wealthy Virginians were stockholders in The Ohio Company that claimed the region in hopes of later selling it to settlers. He chose a 21-year-old Major in the Virginia militia, George Washington, to carry his message.

A likely choice, Washington was an experienced surveyor, used to living in the wilderness. As the second son in a well-to-do family, the young Washington took up surveying as a trade since his older brother Lawrence would inherit the family properties in Tidewater Virginia. Washington also hoped for a career as a military officer, the Lieutenant Governor’s choice was a good one.

Departing Williamsburg, Virginia in early December 1753, Washington and his traveling companion Christopher Gist, an experienced frontiersman and guide, traversed Western Virginia and Western Maryland before reaching “the forks of the Ohio” at modern-day Pittsburgh. North of Pittsburgh and Ft. Duquesne, the pair added Jacob Van Braam and several Native American tribesmen to the party. The weather was cold and often wet, and Washington wrote of rain, sleet and snow as they traveled north. (For a more detailed account: The Journal of Major George Washington, 1754, is available in reprint.)

The party reached Venango, present day Franklin, Pennsylvania, in early December. The French fort, named Ft. Machault, was under construction there. The cabin of John Frazier served as the French headquarters. Though the French were cordial, Washington was told by French authorities he would have to travel farther north to Ft. LeBoeuf in present day Waterford, Pennsylvania, to meet a French officer with the authority to entertain him and address his requests for the French to leave. 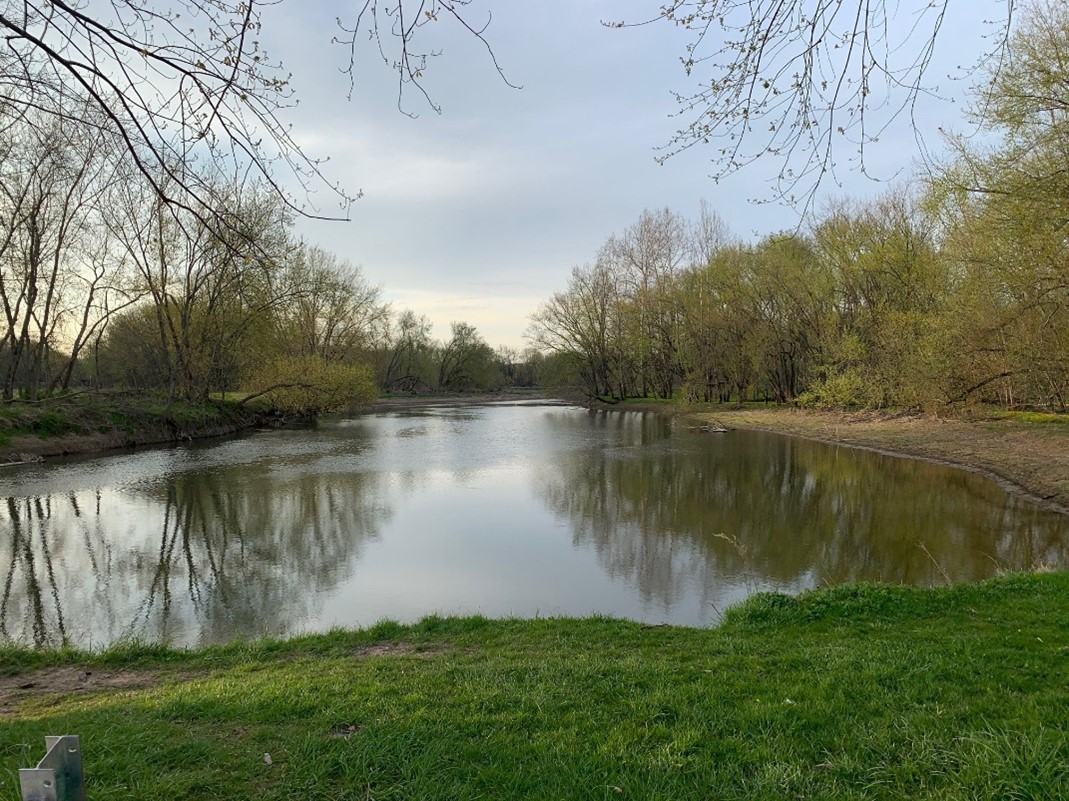 The party continued north, roughly following French Creek, through present-day Crawford County. Washington noted in his journal “We passed over much good land since we left Venango, and through several extensive and vert rich meadows, one of which I believe was near four miles in length, and considerably wide in some places.” This spot is a short distance south of Meadville, Pennsylvania, along U.S. Route 322. 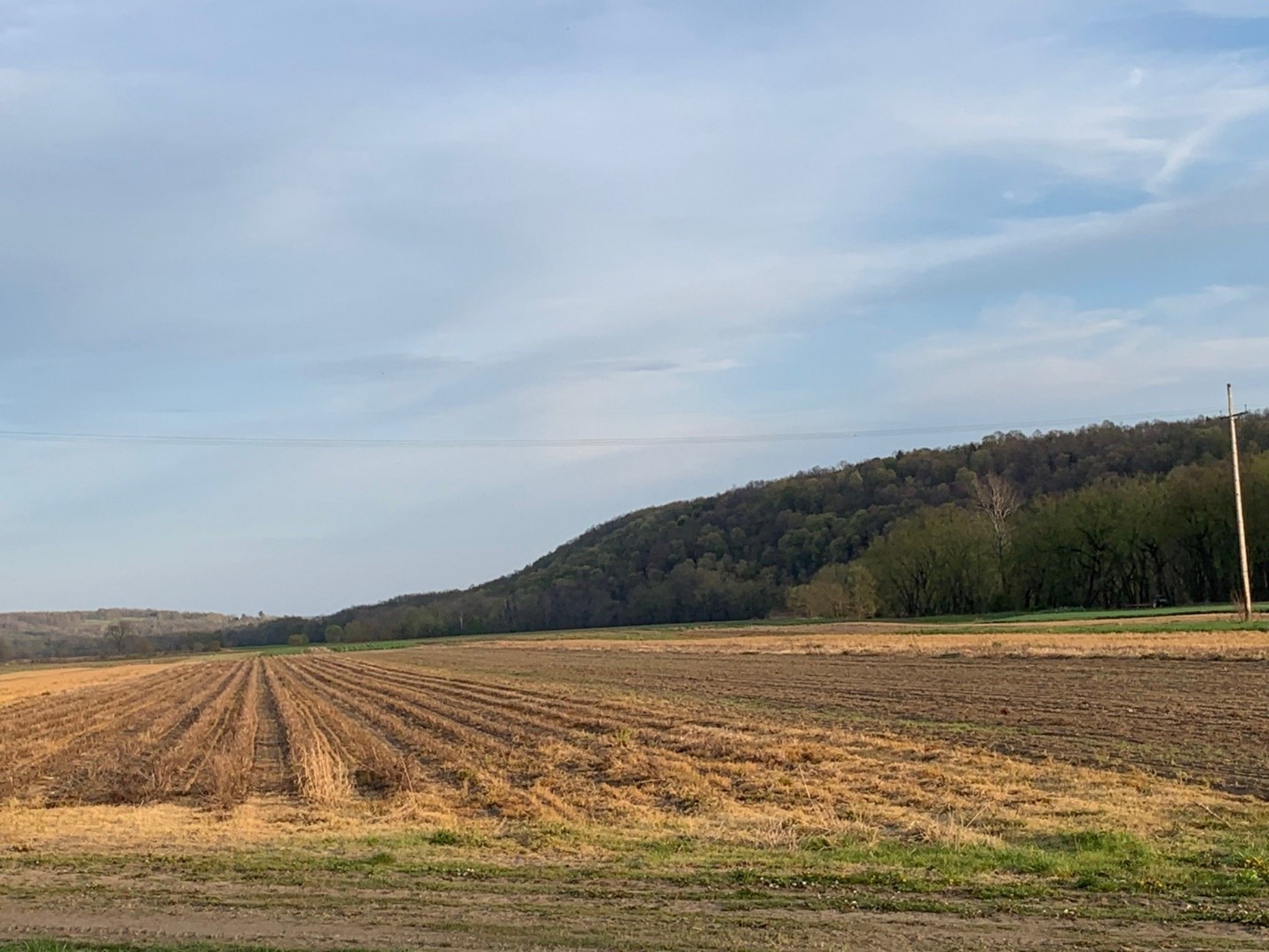 The “meadow” south of Meadville, Pennsylvania

The party traveled on foot, having left their fatigued horses at Venango. After spending the night at a camp located today in the City of Meadville at the modern corner of Terrace and Randolph Streets, the party reached a point North of present-day Cambridge Springs, Pennsylvania where French Creek was widely flooded. Forced to go miles to the East, the party encamped near present- day Mill Village, arriving at Ft. LeBoeuf on December 12, 1753. 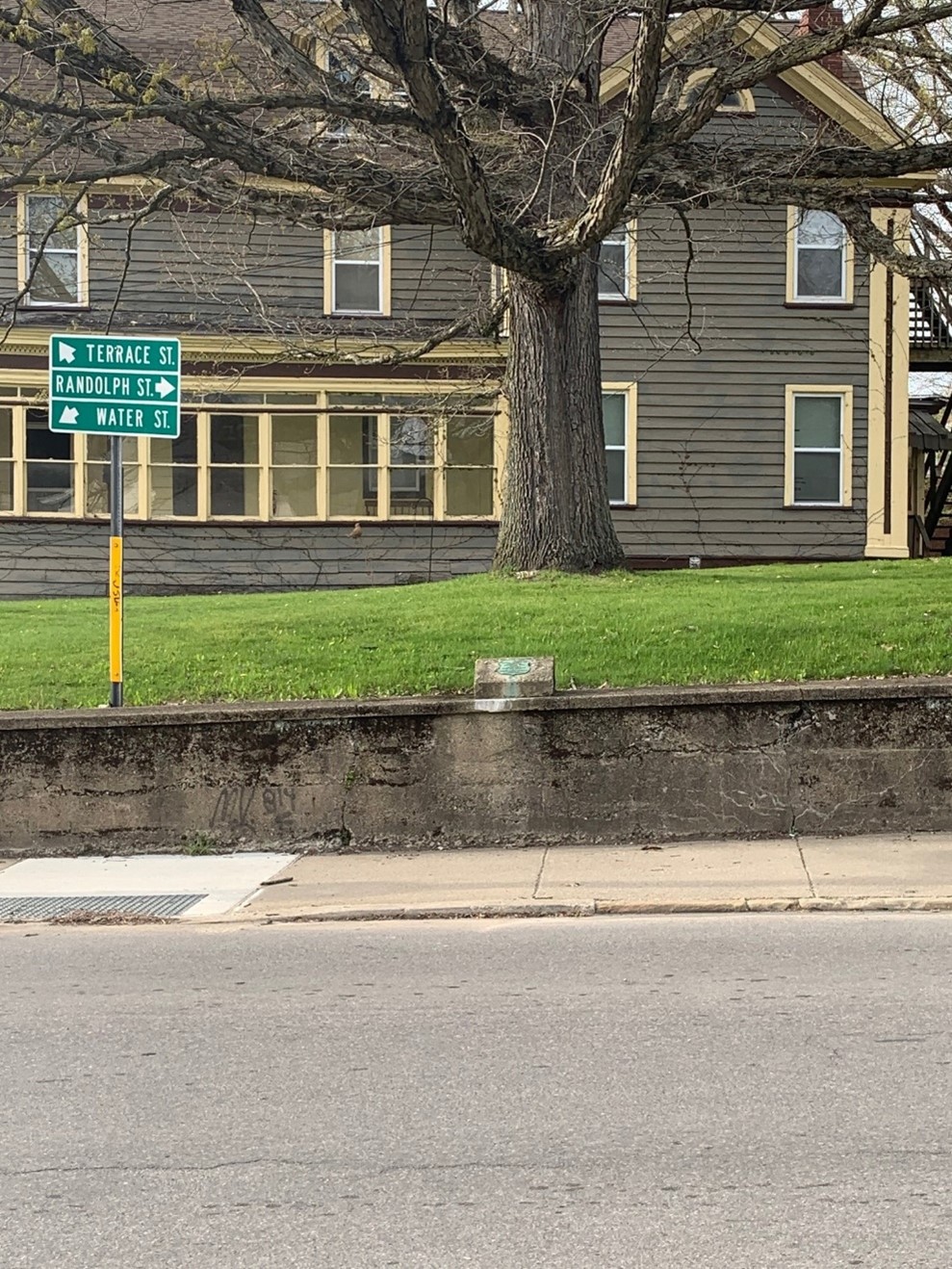 Marker at the point Washington camped in Meadville, PA. 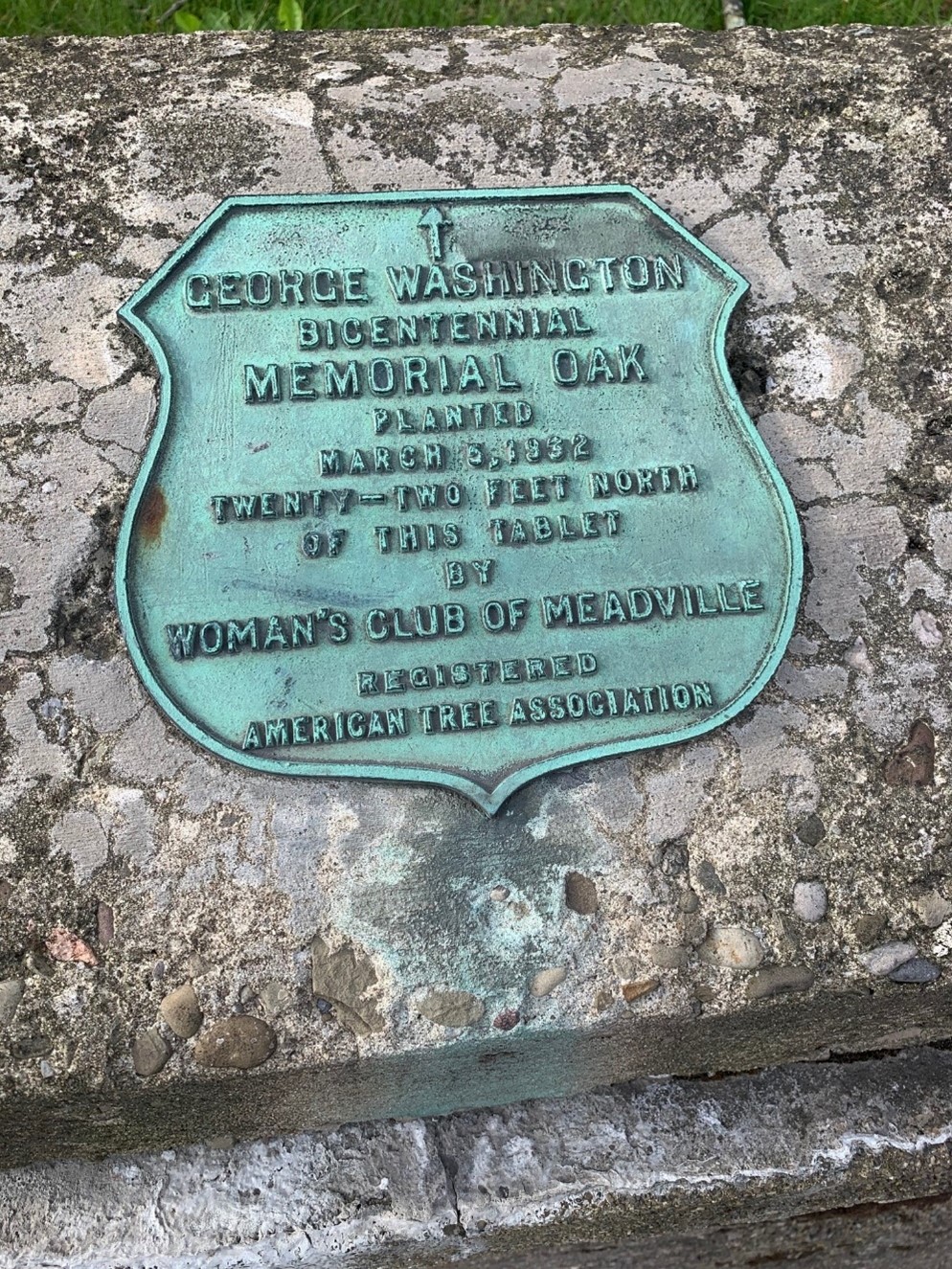 Plaque in Meadville. It does not say “George Washington slept here” but it should.

There, again wined and dined by the French, Washington presented Dinwiddie’s note telling the French to leave the region. Though polite, the French again said no. Washington made note of the size and fortifications of the fort, noting many canoes and flat-bottomed bateaux in French Creek as though the French were preparing to sweep south. Disappointed, Washington and his party took canoes down the frigid waters of French Creek. Even with all the rain and snow they have encountered, they still had to carry their canoes through shallows. Upon reaching Venango, they discovered their horses were still unfit to travel. Lightening their loads to a pack and rifle, they headed south again. Between Venango and Ft. Duquesne (Pittsburgh), Washington was nearly killed twice. One of the Native Americans accompanying the party stopped and took a close-range shot at Washington. Fortunately, the shot missed, and the shooter was disarmed. Later, when Washington and Gist attempted to float down the swift moving Allegheny River on a hastily constructed raft, both were thrown into the freezing river and nearly drowned. They spent the night on a small island, stomping their feet and slapping their arms trying not to freeze. During the night, the river had frozen, and the two continued south toward Virginia. 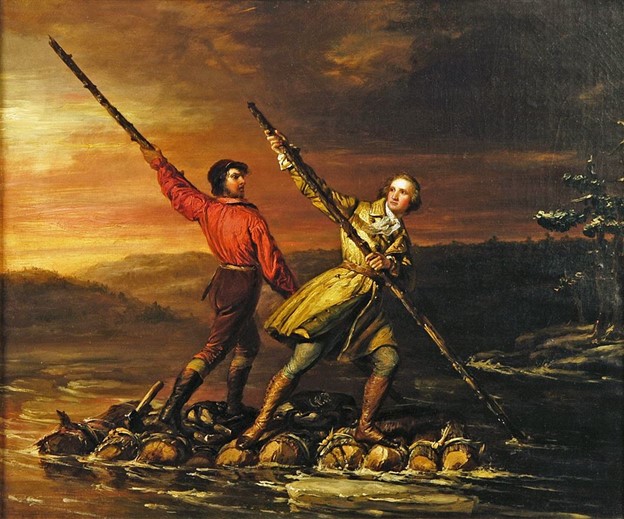 Gist and Washington on the Allegheny River.

George Washington’s mission to Northwestern Pennsylvania was a failure, even if he did not think the French would indeed leave. In the subsequent two years, Washington would again venture to Western Pennsylvania, with a British force, only to be defeated in what proved to be the start of the French and Indian War. 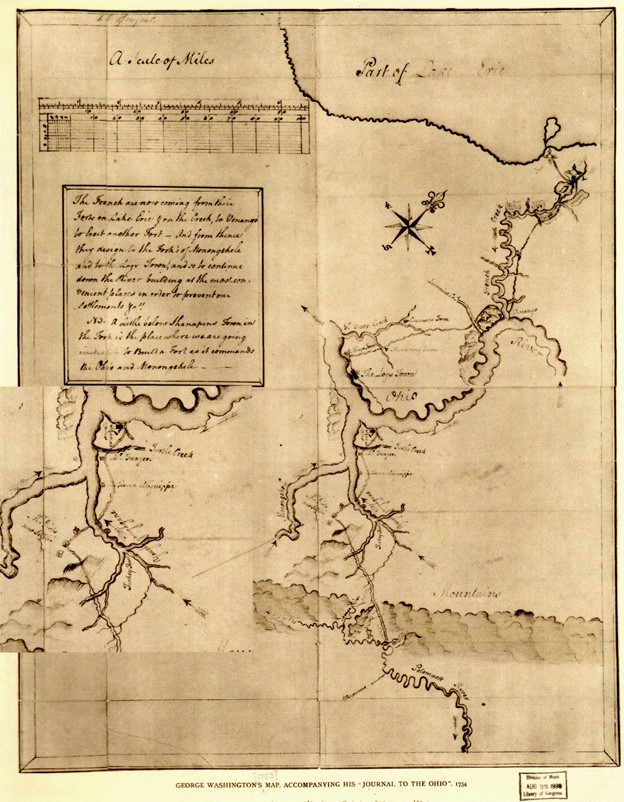 Washington’s map of his journey.

Bates, Samuel P. Our County and Its People: A Historical and Memorial Record. William A. Fergusson & Company, 1899

Washington, George. The Journal of Major George Washington, sent by the Hon. Robert Dinwiddie, Esq: His Majesty’s Lieutenant-Governor, and Commander in Chief of Virginia, to the French Forces on Ohio. Williamsburg: William Hunter, 1754.

Washington’s route is marked in green.