Happiness & Long Life for All its Residents #25

It’s time to celebrate Erie history!  I can’t believe this is my 25th installment in this fun look at all things Erie adding to our happiness and long life.  Every celebration deserves presents so I’m giving you a look of Erie County objects that rarely see the light of day.  Enjoy this virtual exhibit of the common and not so common.  Long live Erie history and the people past and present who make it happen!

Peter Burton (1816-1863) was a native of Mill Creek Township, Erie County, PA. He served as Deputy Sheriff and was later elected Sheriff, serving from his election on Nov. 5, 1849 to Nov. 2, 1852 when he was succeeded by Thomas B. Vincent. Following his service as Sheriff he operated his dairy farm on Buffalo Road. Burton is buried in the Erie Cemetery.

John Jehu Dillon (1808-1882) was a blacksmith in Erie. Born in Ohio, he is also interred in the Erie Cemetery. The fact that Burton and Dillon were both teachers in the First Sabbath School (1829-1830) of Erie’s First Methodist Episcopal Church on W. 7th and Sassafras Streets may explain the association that later resulted in Dillon making the shackles for Burton. Leg irons or shackles were locked around the ankle, with the limited number of metal links in between each foot making it possible only for the wearer to stand still or walk, limiting the chance of escape. Irons are typically heavy and would often rub the skin of a person's legs, causing them to bruise and bleed.

Wooden yoke used in carrying sap, water, etc. It was brought to Erie from Vermont in 1815.

Wooden yokes were commonly used in early 19th century Vermont to carry maple sap from groves to the sugarhouse. A 5-gallon gathering pail was suspended from each end with the yoke resting on the bearer’s shoulders. Yokes could also be used for carrying other liquids but were most often used for transporting sap.

Socket head for pike pole. Used in navigating boats from Waterford to Pittsburgh, PA. Excavated after being buried 75 years. Although a pike pole was used in many occupations, this artifact was used to transport goods, particularly timber, from Waterford to Pittsburgh. The socket was part of a long pole attached to a pike that was used to push and pull logs as they were moved between towns.

In 1753 the French cut a road through the forest from Presque Isle to Fort LeBoeuf (present day Waterford), later extending it to the mouth of French Creek. For almost 50 years this was the only road in Pennsylvania west of the Allegheny River. As it was not used often, forest growth quickly reclaimed it. This resulted in goods bound for northwestern Pennsylvania being carried from Philadelphia to Pittsburgh by wagon, then to Meadville and Waterford by canoe or bateau along the Allegheny River and French Creek.

As early as 1790, the Pennsylvania legislature assigned $400 to improve the navigation of French Creek, with another $500 allotted in 1807. Around 1815, locals noted that in some seasons French Creek could be navigated as far as Waterford by boats with capacities of up to 20 tons, but for a few weeks in the summer it was hardly usable by any craft larger than a canoe. Be that as it may, the creek was the best means for transporting heavy or bulky goods. On the creek north of Meadville was a shipyard where John Mattocks and Noah Town built flatboats, keel boats, and arks. These were constructed upside down then turned on their sides to be slid into the creek. When the boats were ready to be launched, the townsmen gathered with pike poles to turn them over and get them into the water. During the 1800s timber, bark, shingles, and staves were major products of northwestern PA. These commodities were moved to Pittsburgh on rafts with timber also being floated down the waterway, moved as needed by men wielding pike poles.

Model cannon made by Daniel Weeks in 1872. The gun was made from a bolt from the US Brig Lawrence (Com. Perry's original Flagship); the carriage was made from wood taken from the Lawrence. 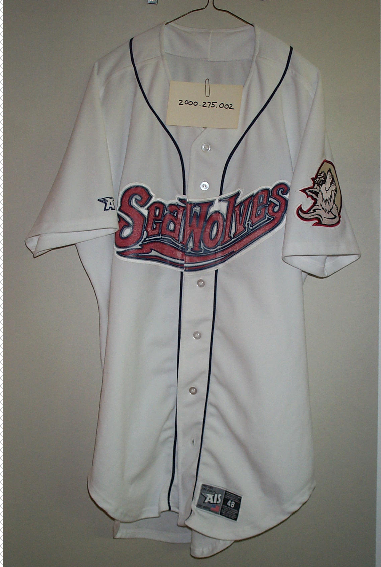 White "Home" jersey of the Erie Seawolves, with "Seawolves" script on front, number "24" on back. Seawolves logo patch on left sleeve, manufacturer's logo on right sleeve. White polyester jersey with navy blue piping around neck and placket, six clear plastic buttons and Velcro patch to close front of jersey. Manufacturer's label on outside of left tail: AIS...Pro Look Pro Quality Pro Worn, size 48. (I don’t know about you but I miss Seawolves baseball!) 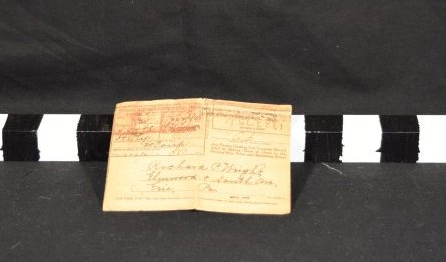 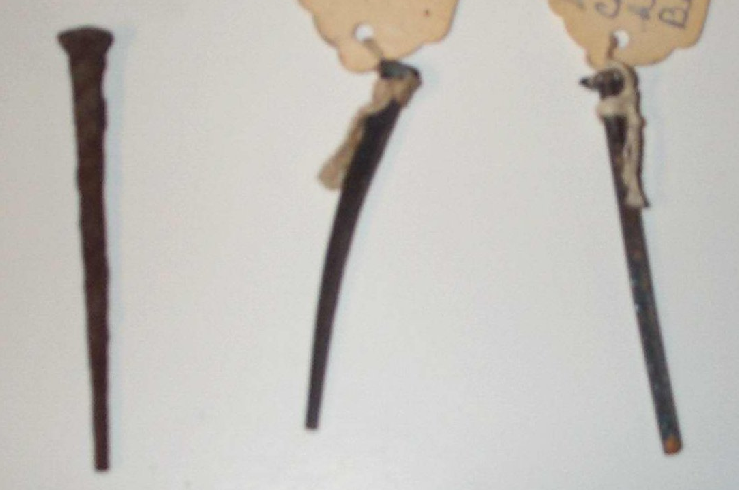 A big key made of metal, found at the site of Fort Presque Isle. 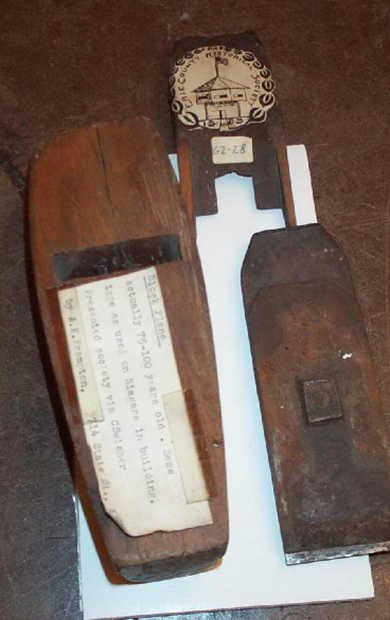 Three-piece Block Plane, small wooden with metal blade and hand grip. The blade is engraved with trademark-"Ohio Tool CO., The Steel Brand" and the plane is "JPEAROE New York No. 108". The hand grip has Block House picture on it and a note that reads, "Actually 75-100 years old, same type as used on Niagara in building”. 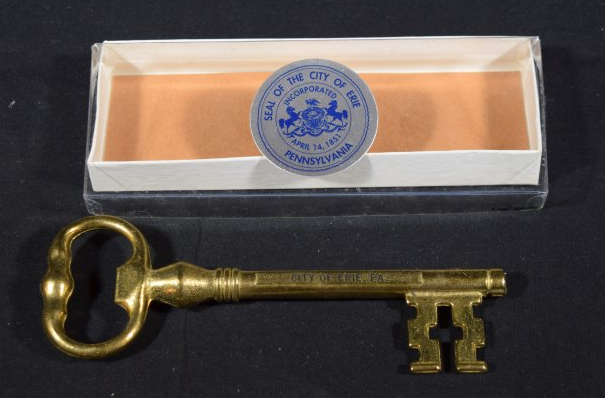 Big brass key that says, "City of Erie, PA." Comes in a white box with a clear lid that has a silver and blue sticker with the Pennsylvania seal on it. 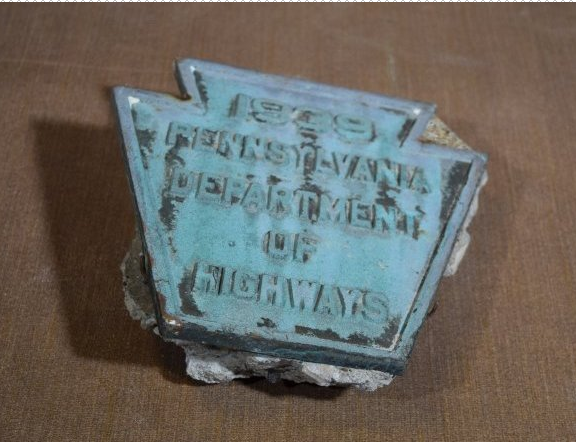 Brass Plaque from Powell Avenue Bridge. The plaque side says, "1939, Pennsylvania Department of Highways." On the other side is a combination of rock and metal pieces such as nails. Both this one and the matching plaque, 2006.50.1, are in a cream bag. The bag says, "PennDot." 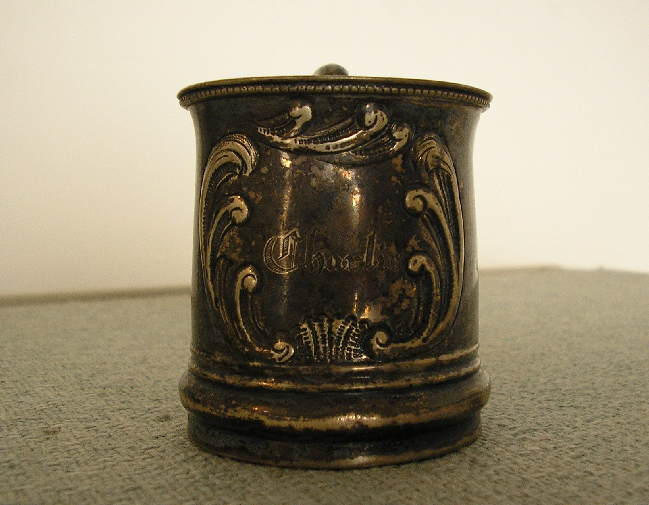 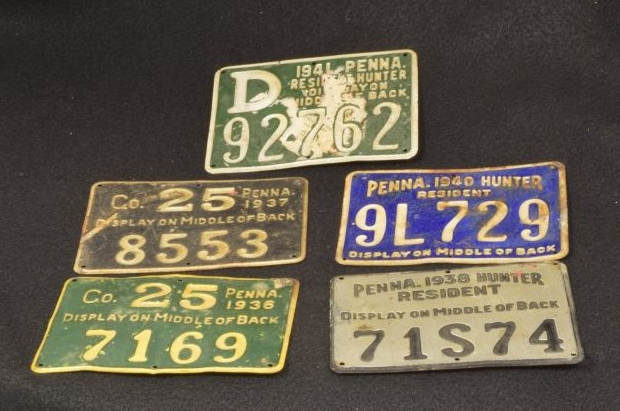 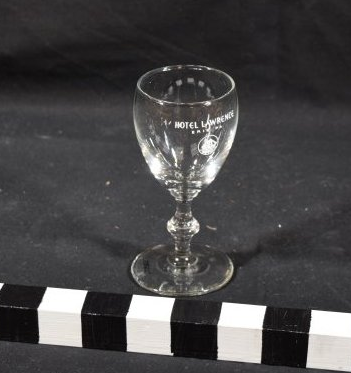 Cordial glass, inscribed with "Hotel Lawrence, Erie, PA." One of 4 glasses in the collection.
The Hotel Lawrence, built by Henry Shenk in 1913, was located on the northeast corner of 10th and Peach Streets in Erie, Pennsylvania.
Senator John F. Kennedy made a campaign speech in front of the Hotel Lawrence on September 28, 1960. As thousands of people filled the streets, Kennedy began his speech with, "Governor Lawrence, ladies and gentlemen: -- doesn't anyone ever go to school in Erie?" This question resulted in much laughter from the crowd. 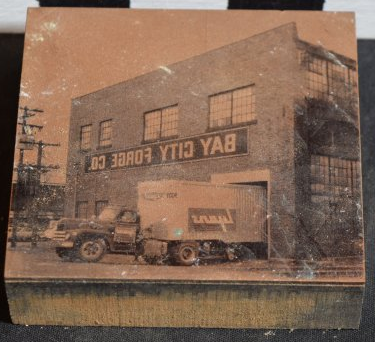 Printing block for Bay City Forge Company. The image is of a building and semi-truck from Lyons Transportation, also of Erie.

Vinyl record which has an image of downtown Erie on its sleeve. It says, "Words and Music to Dream by, Skip Letcher- Narrator, Dick Fry- At the organ, piano and chimes, From the Poetic Works of Ellen H. Eff." There is more writing on the back. 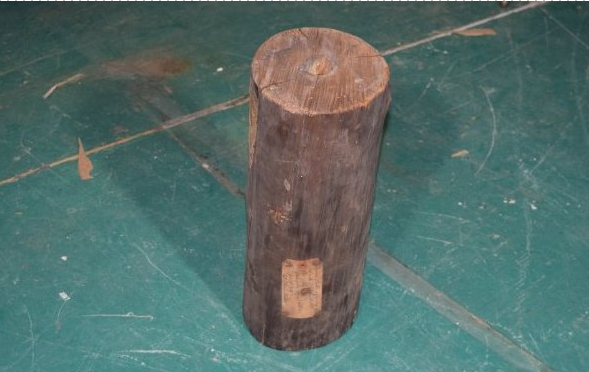 Section of water pipe dug up by the Mutual Telephone Company in May 1925 on the west side of French St. between 9th & 10th. Estimated date is from the first quarter of the 19th Century. The lot was previously occupied by a tannery. 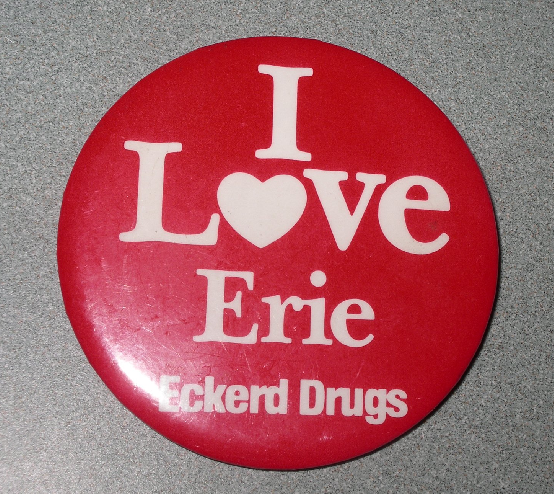 Finally, this button says how I feel. Many thanks to curatorial staff member Pam Lenz for research on some of the objects.