Happiness & Long Life for All Its Residents #76 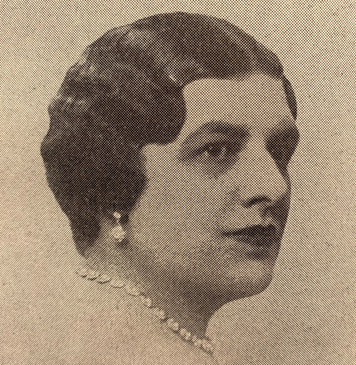 Rosita was an international opera, concert, and radio performer.  Before hitting the international scene, Ruth attended local grade schools and graduated from Erie High School.  She joined the choirs of St. Peter’s Cathedral and St. Patrick’s Church and was “discovered” by local voice and piano teacher, Alice Sloan.

Her studies in Erie complete, she entered the Witherspoon Scholarship competition in Chicago and won, studying music there.  Then, after more training, it was off to Italy to become one of the leading mezzo sopranos of the country.  During WWI, Rosita toured 100 American cities performing and raising money for Navy Relief.

Ruth never forgot her hometown as she performed the leading role of “Aida” here in 1935 to a huge crowd.  The July 18, 1935, Erie Daily Times front page headline reads “Ruth Ford, Opera Star, Is Welcomed Back Home by Enthusiastic Erieites”.  A wonderful quote from Erie businessman Robert Weschler from the edition reads:

She went on to sing with the Chicago City Opera Company, the Philadelphia Civic Opera, the International Opera, Royal Opera Company of Canada as well as others.  After retiring from concert tours, Ruth maintained a studio in New York City teaching the art.  She died October 19, 1977, and is buried in Erie’s Calvary Cemetery.  Ruth was survived by a son David in California and two nieces in Erie, Nat Allen and Jean McQuiston and a nephew, Richard Ford of Detroit.

I have yet to locate any recordings of Ruth’s work, but I am so proud to know that a local lady had such success in a very demanding art form.  That brings me much happiness!