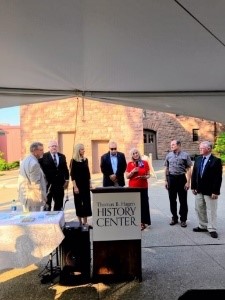 On Wednesday, July 10, on the Hagen History Center Campus, local architect Donald (Jeff) Kidder received the President’s Award for all his vision and restoration of local properties including the ECHS’s Wood-Morrison House.   His business partner Michael Jefferys received the Preservation Construction Award for his work on restoration projects for multiple historic homes in downtown Erie.

The Preservation Initiative Award went to Tom Fuhrman of the Lake Erie Conservancy which is responsible for conserving 1000s of natural acres in Erie County.

The Local History Award went to the WWI Centennial Committee for their efforts in identifying and memorializing Erie County’s WWI dead.

A fixture on the Hagen History Center campus, Bob O’Rear received the Volunteer of the year Award.  Bob volunteers about 20 hours each week and was instrumental in the design and implementation of the recent Red Cross Exhibit.

ECHS Curator Becky Weiser received the Employee Commitment to Excellence Award.  In her two years at ECHS, Becky, and the team of volunteers she’s developed, have tackled the massive project of reviewing each artifact, cataloging it. and storing it using a warehouse system so that it can be retrieved later.   Becky and her team are also going through the process of determining what the museum should possibly deaccession.  The ECHS will schedule a future auction for these items.