On Sunday, December 17, 1944, Sgt. Kenneth Ahrens of Erie, Pennsylvania, would experience an event that would mark one of the worst moments of the Battle of the Bulge. Ahrens would survive and lead a productive life in Kentucky, but December 17, 1944, would no doubt linger in his memory.

Kenneth Ahrens was a solder in the United States Army’s Company B, 285th Field Artillery Observation Battalion. The Germans had broken through American lines in the Ardennes Forrest in Belgium and Luxembourg and were driving fast,  heading toward the key port of Antwerp. This was to be Hitler’s last hope at winning the war.

That fateful Sunday afternoon, the 285th was moving by road in a column of jeeps and trucks when they were suddenly stopped by German fire at the Baugnez crossroads, near the village of Malmedy, Belgium. The men took cover in roadside ditches and then over 100 surrendered to the men of Colonel Joachim Peiper’s SS armored regiment. The Americans were searched and disarmed and herded into a field near the crossroads.

A short time later, an SS soldier shot two Americans with a pistol. What followed was  a hail of machine gun fire from German armored cars that lasted nearly thirty minutes. Some Americans tried to run, only to be cut down. Others would escape but most lay in that muddy field to suffer what came next. The Germans then walked among the wounded and dead to finish them off.

Sgt. Ahrens, wounded in the back, lay face down, perfectly still, eyes closed, trying not to breathe as the enemy soldiers calmly moved among them,  shooting anyone showing signs of life. He and other survivors later commented on the casual way the Germans did this,  kicking the Americans and shooting any that showed signs of life.

After nearly two hours, as the German armored column moved on, Ahrens heard someone say, “Let’s go.” He and several others ran. They would find the American lines,  and  the news would  begin to spread of what would become known as the “Malmedy Massacre.”  84 American soldiers had been executed. In mid-January, 1945, the massacre sight was discovered under a thick blanket of snow. Bodies were identified and photographed; numbered tags placed by each body.  Many had been shot in the head at close range.

In the aftermath of the Battle of the Bulge and the last months of WW II in Europe, the US Army would make it a special point to find those responsible for Malmedy. By 1946, the US Army was ready to proceed with the prosecution of those responsible. Seventy-four former SS soldiers, including Colonel Peiper, would be tried at the former Nazi concentration camp at Dachau, near Munich.

Kenneth Ahrens would be among those who testified about the events of December17, 1944. All those who testified made it clear what had happened. Unarmed American soldiers were brutally murdered by the men of Col. Joachim Peiper’s SS unit. Testimony made clear that even if no direct orders were given, the Germans had no intention of taking prisoners.  In the trial that followed, US Army defense attorneys attempted to bring out facts about “mock trials by candlelight” held in cells before the trial, in hoping to garner confessions from the Germans accused. That defense fell on deaf ears; in the end, over seventy of the accused were sentenced from punishment ranging from death by hanging to life imprisonment. Some were given lesser jail sentences.

By 1956, however, all were released, with none of the death sentences carried out. A hearing in the US Congress had raised questions about the “mock trials” and the treatment of the accused at the hands of their American captors. Post-war cooperation with Germans was also cited. The world was in the midst of the Cold War, and military bases in Germany were a priority.

Kenneth Ahrens often returned to the Baugnez crossroads in Belgium, now a memorial to the Malmedy Massacre. He retired from General Electric in Kentucky, where he had worked as a payroll manager for 38 years. A Kentucky Wildcats fan and a “Kentucky Colonel,” he died in October, 2004 and is buried in Louisville.

For more on Kenneth Ahrens and the Malmedy Massacre, visit the Hagen History Center archives.  A large collection of veteran cards of men and women from Erie County , many including newspaper clippings from WW II, are available for research. 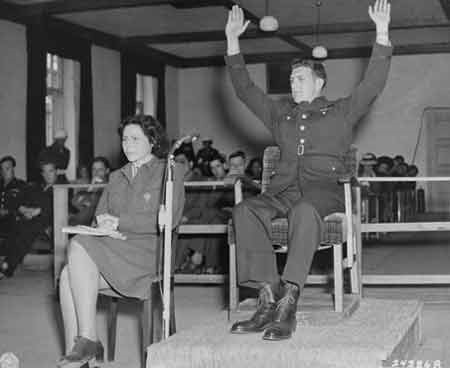