Long Life & Happiness for All its Residents #11

I wish all my readers exactly what the title of this blog says, always. The reality exists though, that an inevitable part of life is death.  With that in mind, let’s take a brief look at the history of some cemeteries in Erie. 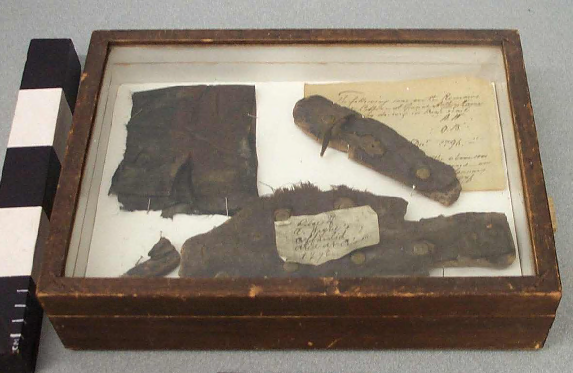 The only burial related object in the Hagan History Center collection:  Coffin remnants from General ”Mad” Anthony Wayne, buried at the foot of the flagpole of the Fort Presque Isle blockhouse before his body was rendered.

According to the 1888 book, Erie did not have a formal cemetery until 1805.  Until that time, burials were made along the lake, west of the mouth of the Mill Creek.  The first cemetery was located on the corner of 8th and French Streets “where the stately residence of Mr. Thomas Brown now stands”.  The 1888 Erie City Directory lists Mr. Brown’s address as 801 French Street, and he was the manager of the Pennsylvania Paint Company Limited.  A quick drive over to 801 French Street didn’t lead me to a beautiful home but to what is pictured in the following photograph, which you may recognize.  Think about that the next time you are at an Erie Insurance arena event! 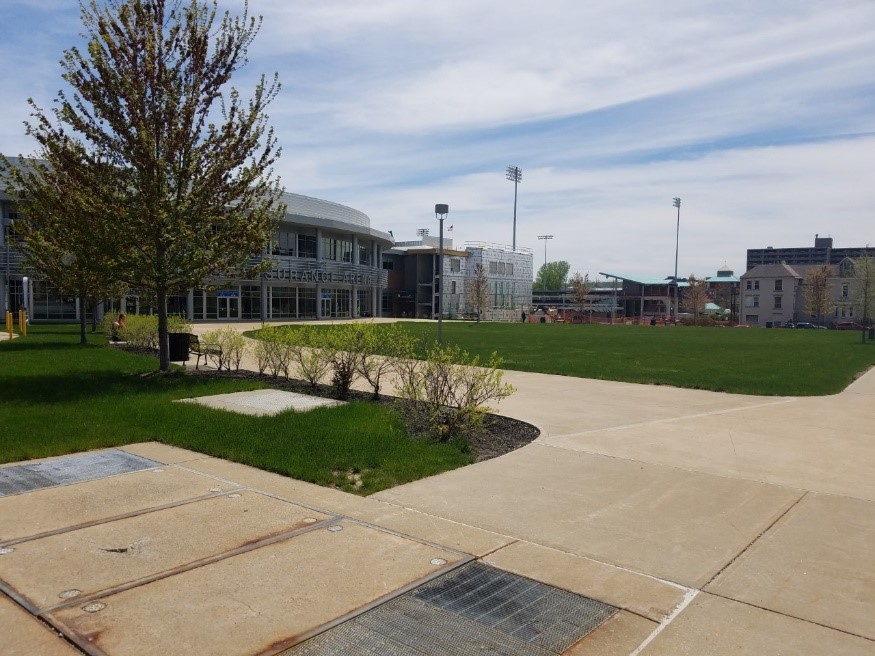 In 1851, the French Street cemetery along with various small Church cemeteries throughout town were closed and “with few exceptions the bodies removed”.  Seventy-five acres had been purchased for $7,500 the year before “bounded on the north by Nineteenth, on the west by Cherry, on the south by Twenty-sixth and on the east by Chestnut Streets forming the Erie Cemetery”. 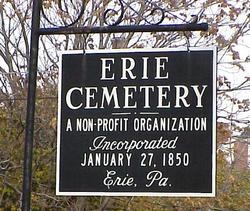 To give you an idea how common it was for bodies to be moved, the following is a description of the journeys Colonel Seth Reed, the first white settler of Erie County took after he died.  “There being no burying ground, the remains of Col. Reed were temporarily interred on the Walnut creek farm and were later successively removed to the United Presbyterian graveyard, corner Eighth and French streets; then to the Episcopal graveyard, and finally to the family lot in the beautiful Erie cemetery.” 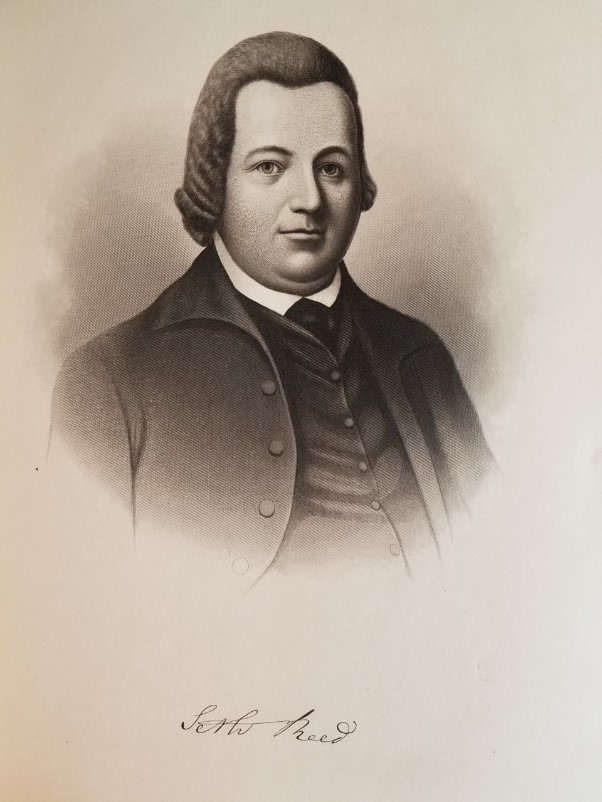 A stroll through Erie Cemetery provides the visitor with not only tranquil surroundings but is a “who’s who” of Erieites buried there; Strong Vincent, Daniel Dobbins and Harry T. Burleigh are just a few.  Name an industrialist in town and you can find their resting spot; they are all there. It was designed as “an honored resting place for the dead, and a beautiful and attractive spot for the living.” 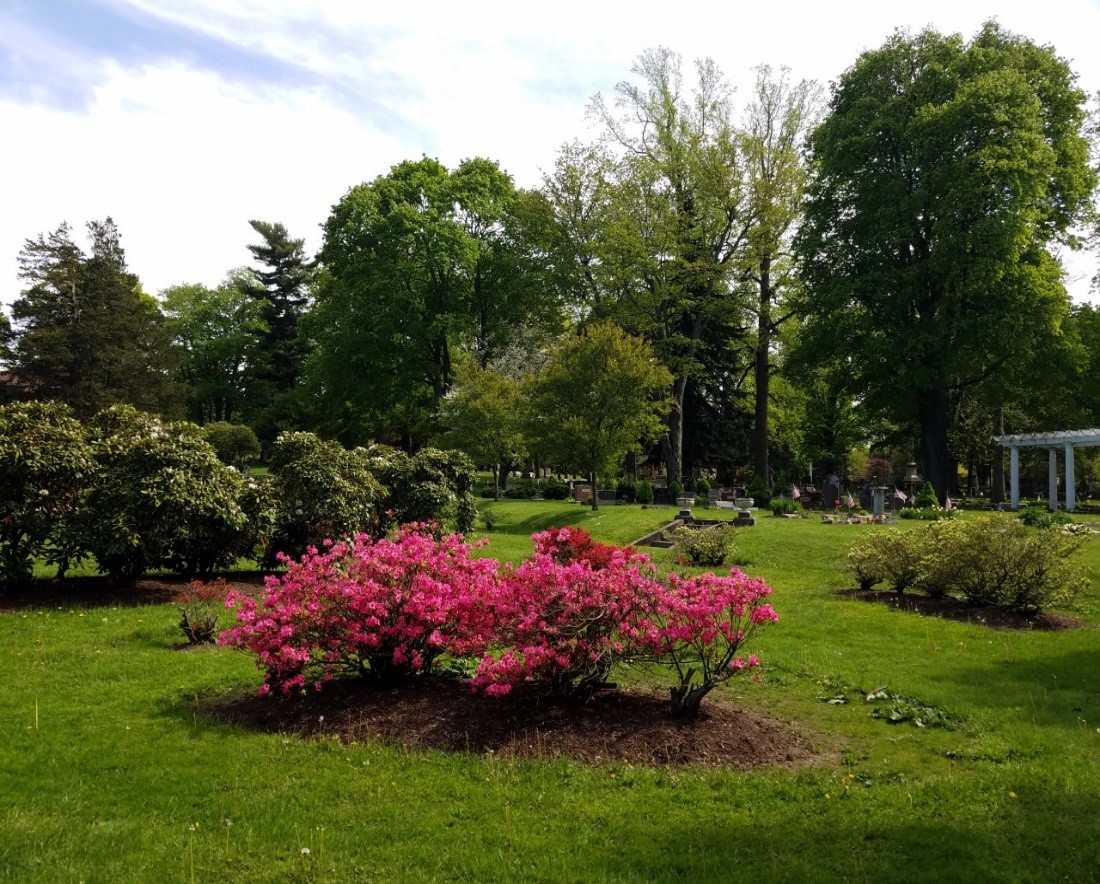 I love the sunken garden section of the Erie Cemetery.  A bad freeze a few winters ago took out many of the azaleas but the remaining ones are gorgeous!

The mental image the 1888 book gives of the cemetery is outstanding!  I quote: “The ground on the south side has a commanding elevation.  From the summit a magnificent landscape is spread out.  The city at the foot of the hill, the sparkling blue waters of Presque Isle bay farther on, and Lake Erie, dotted with steamers and sails in the background, present a picture which, once seen, can never be forgotten”. 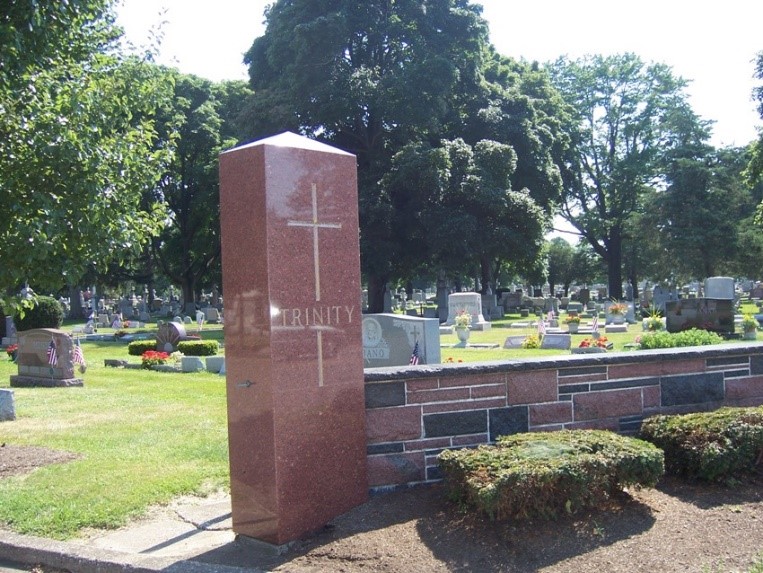 In 1858, the first Jewish Cemetery was opened on West 26th Street, not far from Erie Cemetery.  In 1859, Trinity Cemetery was established on 30 acres outside the city limits for the burial of Roman Catholics.  It was at that time that the Catholic Churches in the city emptied out their burial grounds, moving the bodies to Trinity.  St. Vincent Hospital is located on the former cemetery of St. Patrick’s Church. Famous Erie “residents” there include WWII hero Phil Cochran, Major league umpire William Finneran and Civil War veteran Patrick Murphy.

There are approximately 147 cemeteries throughout Erie County today.  Although many are available for new burials, several of them are somewhat forgotten.  Maintaining graves of family members who have recently passed or those you’ve never met is one way of staying in touch with your own personal history as well as a time of reflection and honor of those lives.  One CAN find happiness walking through a beautiful cemetery.