Long Life & Happiness for All Its Residents #26 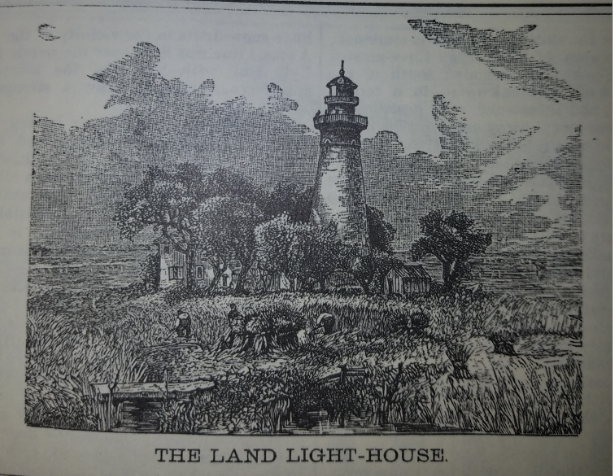 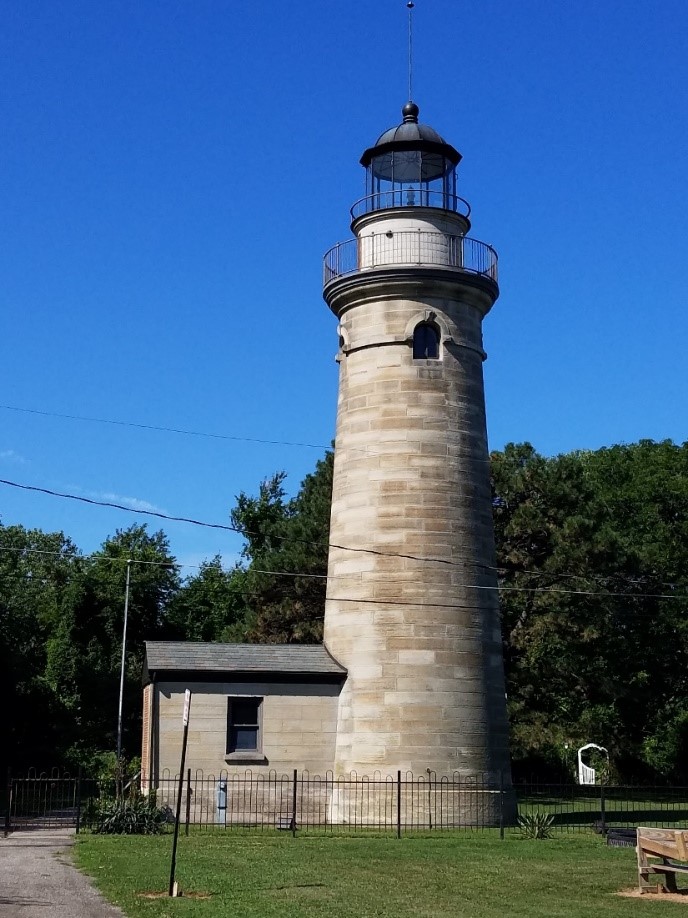 A few weeks ago, a small group of us from the Historical Society were granted entrance to Erie’s Land Lighthouse which used to be open for tours sporadically before the pandemic.  Because I couldn’t bring all of you along and our Erie lighthouses bring so much happiness, this blog is specifically about this one navigational aid.  A special “thank you” to John Mulligan and Anthony Pianta, our friends at the Erie-Western Pennsylvania Port Authority for making this happen.

Just to prove to all my readers how important Erie was in the early years of our country, the first lighthouse on Lake Erie was built here in 1818. You may recall that in 1819 (see blog #20) the Federal government conducted a survey of the Peninsula and money was allocated for the development of the Erie Harbor.  We were on our way for major growth as a community due to the importance of Great Lakes shipping (no trucks or railroads back then).  The Reed family steamboat fleet was established here in 1830, the USS Michigan (later Wolverine) was built and stayed in Erie starting in 1843, the Erie Extension Canal opened into Lake Erie in 1844, and in the 1920s, Erie became the freshwater fishing capital of the WORLD due to this development.

This first lighthouse was a stone structure and cost $3,000 ($66,500 today). By 1851, the tower was beginning to settle, and metal bands were placed around it to keep it together.  Obviously not a long-term fix, in 1858, a brick lighthouse was built about 200 feet west of the current building but not without controversy.  The government purchased bricks from Milwaukee for the new construction but some in town felt that Erie-produced bricks would be just as good, and cheaper.  Unfortunately, the government decided upon the Milwaukee bricks.

Sadly, this structure was short lived as well.  The foundation once again settled and cracks were forming in the walls and a definite lean was being noticed (think Leaning Tower of Pisa). So, in 1866, at a cost of $33,000 (approximately $1.1 million today) the Lighthouse we see today was built.  The foundation had to be dug 20-feet deep, solid oak timbers measuring 20-feet long by 12-inches square were place at the bottom.  Then 6 feet of broken limestone laid in Portland cement were laid with solid courses of stone 8-feet deep was placed on top of which the tower was built.  This formidable structure was made of Berea sandstone quarried somewhere in northwestern PA or eastern Ohio most likely.  This fine grained stone began to be dug in 1830 and was used originally for grindstones and whetstones.  Named for Berea, Ohio, where much of it can be found, it is fossil free and beautiful. I petted the Lighthouse on our tour, and it is indeed smooth. 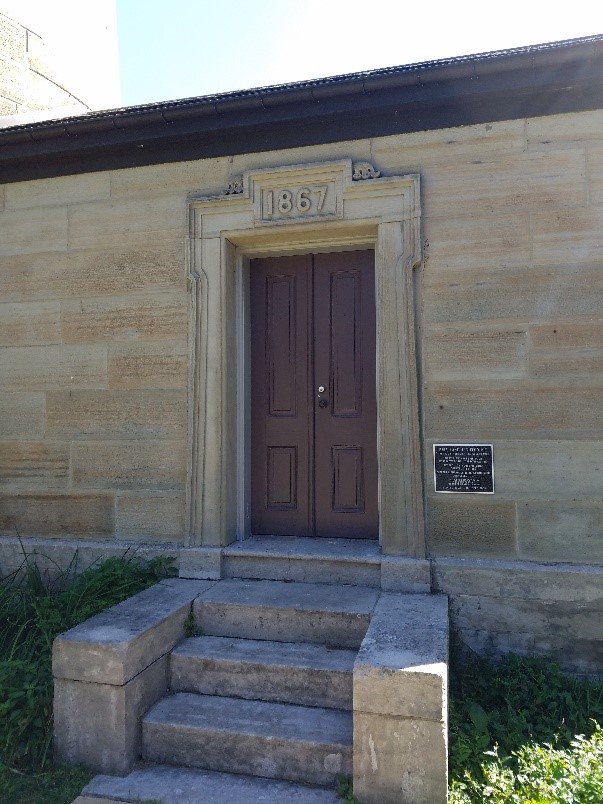 Door to the oil room and entrance to the tower.

The lighthouse tower is 127 feet above the lake level (1888) and the light was made by L. Santer & Son in Paris at a cost of $7,000, fueled by mineral oil.  The fixed white light could be seen for 17 nautical miles.  Attached is an oil storage room and the nearby cottage for the caretaker was built as well. 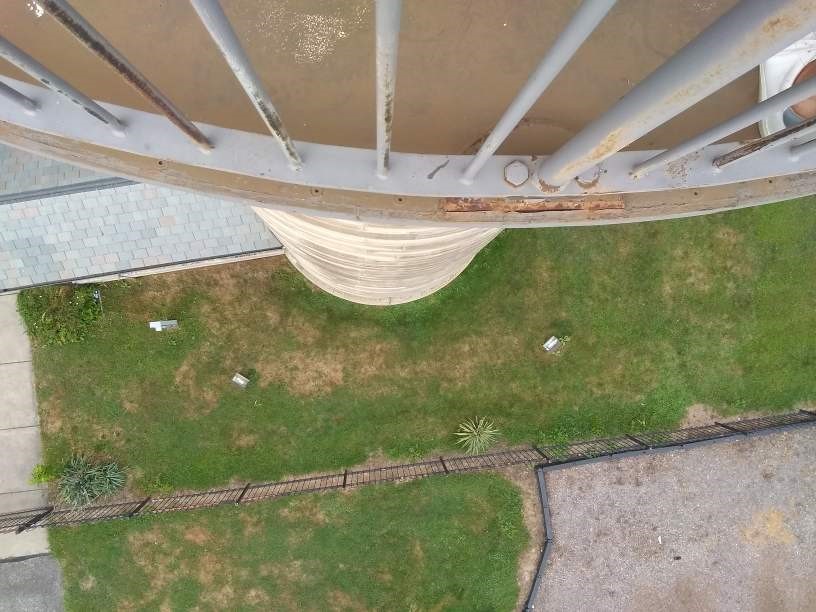 View from the top looking down 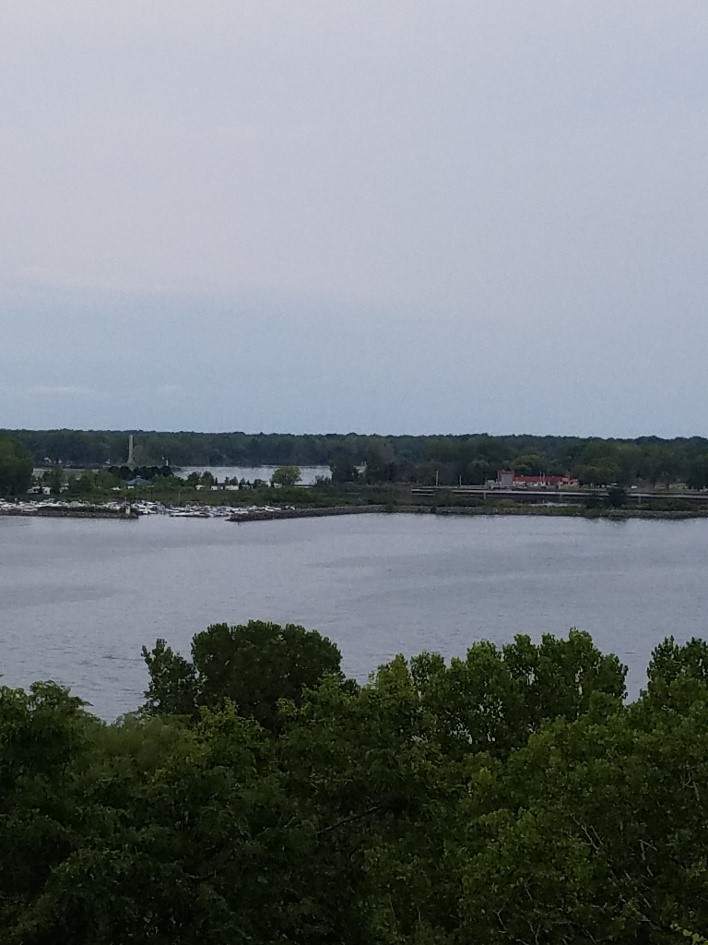 The Peninsula from the top of the Land Lighthouse with the Coast Guard Station on the right. 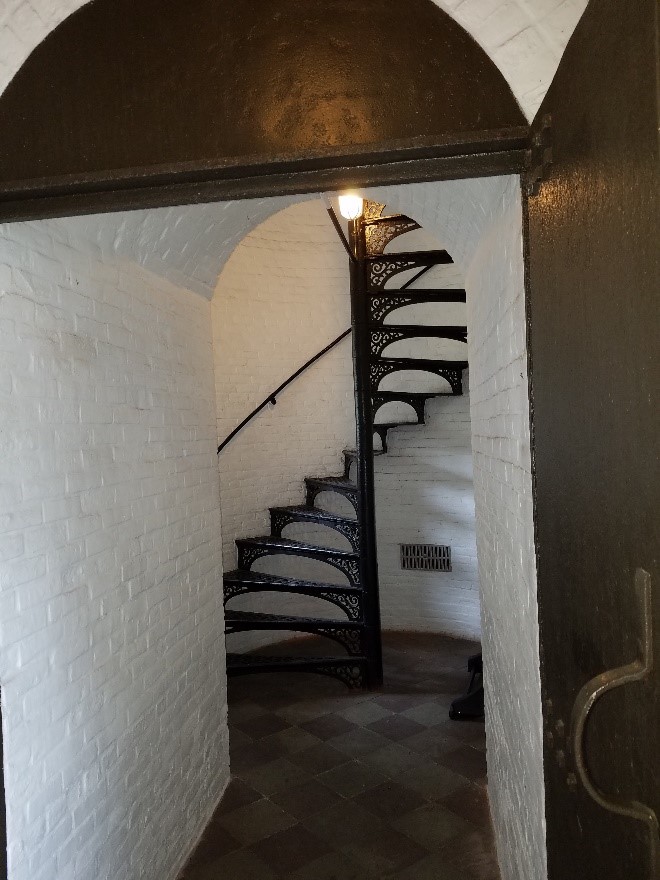 Stairs in the tower. There are 69 steps to the top. 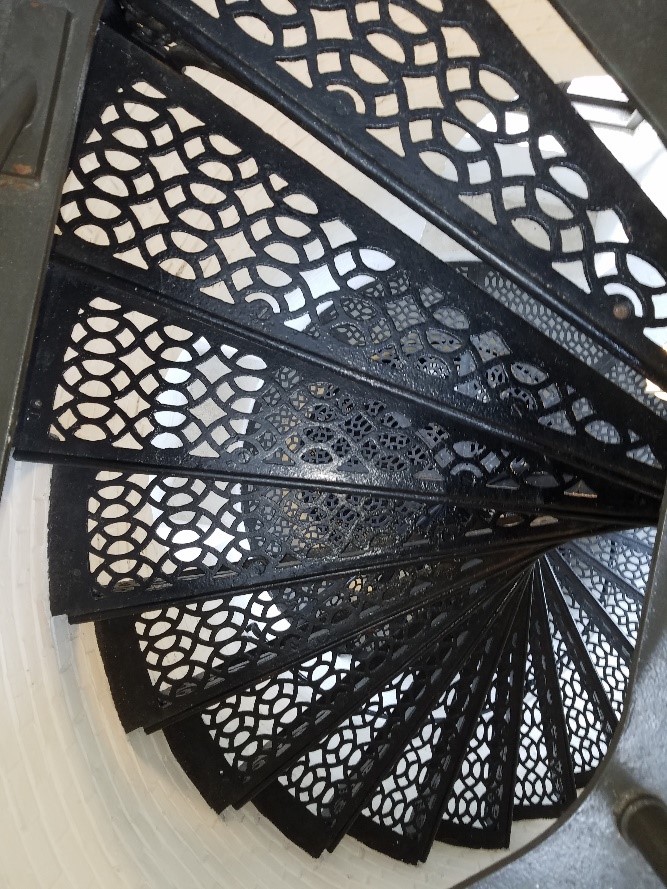 The Erie-Western Pennsylvania Port Authority currently has ownership of the Land Lighthouse and in 2003 conducted a cleaning and repairs to this piece of Erie history.  They rebuilt the missing lantern room and watch deck, installed interior brick masonry that supports the iron staircase, repointed the exterior, put a beautiful slate roof on the oil room and installed a lighting arrestor system.   Although the light no longer shines, the Land Lighthouse shines in the hearts of many as we appreciate its service and beauty throughout the years.