"Long Life & Happiness for All Its Residents" #7

Long Life & Happiness for All Its Residents #7

Erie County has had its share of famous personalities over the years.  Bob Hope had his first marriage here and President Taft visited his friend Charles Strong here (in what is Gannon’s Old Main), just to name a few.  So, I do believe our fair corner of the Commonwealth has provided happiness for many a visitor.  One of the earliest visitors here was General Lafayette, American Revolutionary War hero.   In this blog, I want to write about not only his visit as explained in the 1888 book, but a little of what the curatorial department at the Historical Society does, and some of the objects we have in the collection related to this exciting time.

Marie Jean Paul Roch Yves Gilbert Motier, Marquis de Lafayette was a French aristocrat who came to the aid of the Americans during the Revolutionary War.  After the war, he returned to France to assist his country in their own revolution but maintained a close friendship with Washington, Jefferson and others who fought for the American cause.  In 1824, the General was invited to return to the United States to celebrate the upcoming 50th anniversary of our nation’s founding.  Treated as a “rock star”, Lafayette toured much of what was then the United States.  Did you know that Fayetteville, North Carolina was named after him?

The 1888 book states that Lafayette arrived in Erie in 1825.  “On June 3rd, was royally entertained at a banquet spread on tables 170 feet in length on Second Street on a bridge over the ravine between State and French streets, covered by awnings made from British sails captured by Perry, and under the supervision of John Dickson.”  Leaving Erie at about three o’clock in the afternoon, the tour continued into New York State. 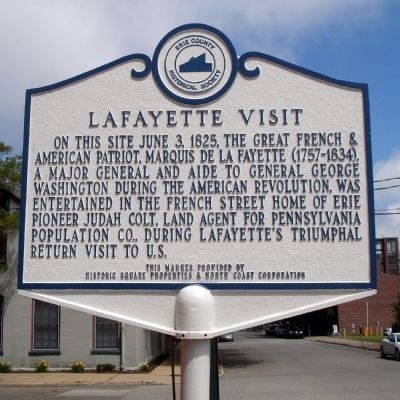 Not in the book, but just as important is the General’s overnight stop in Waterford on June 2nd with speeches, a banquet and the “usual toasts” before his arrival in Erie the next day.

We have several objects relating to Lafayette’s visit and one that I had to play detective to find out its significance.  They are pictured below with a short description. 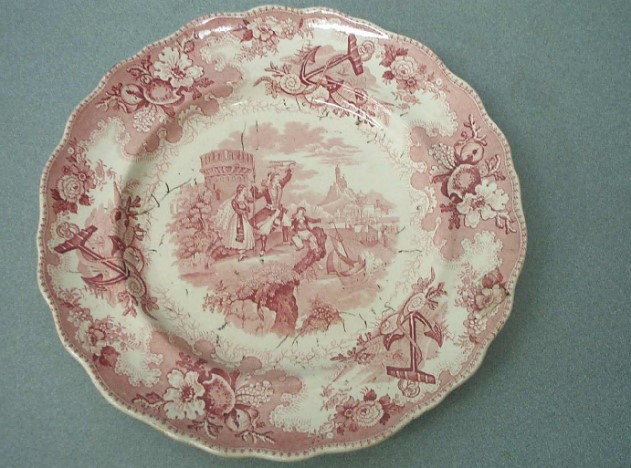 Ceramic dinner plate, pink and white. Incomplete label on reverse states, ''This is one of the plates used at a dinner for Lafayette in 1825 in a home at 2nd and French, Erie, PA.'' The reverse also has a title for the plate ''The Sea'' in the same pink color as the front, under the marker's mark. 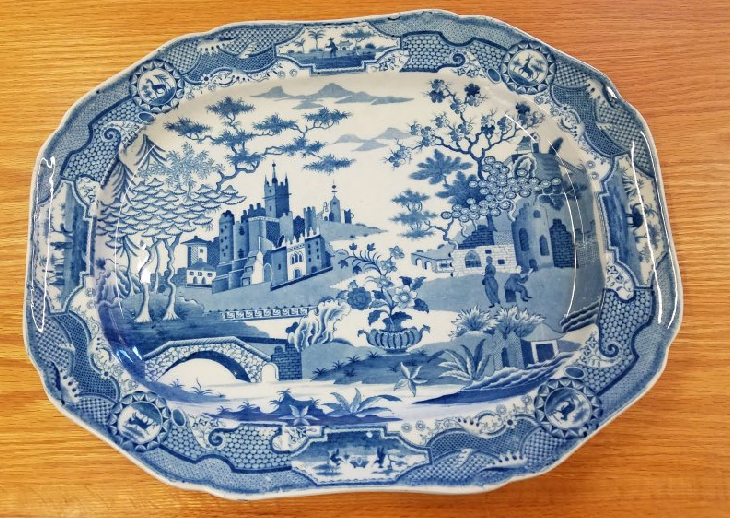 The platter, from which roast pig was served at the Lafayette banquet willed to the Society by John Dickson Miller.  He had fallen heir to it because his great-great-grandfather ran the hotel or tavern at 2nd and French. 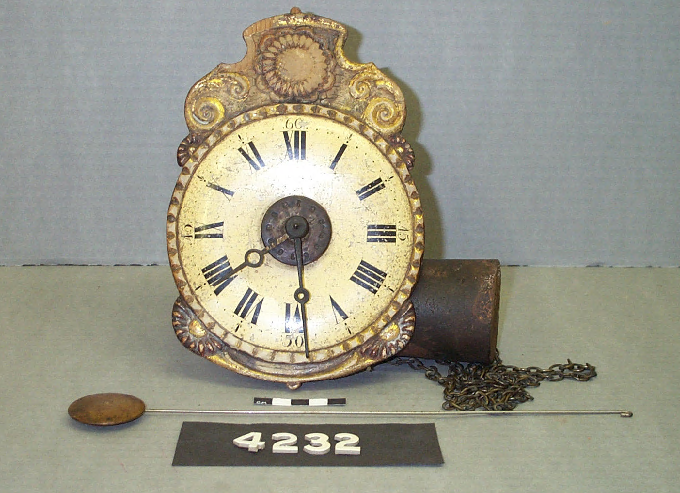 Wig-wag clock which hung at the Waterford Tavern when Lafayette was entertained there in June 1825. Pale yellow face with black Roman numerals, traces of gold gilding on wooden frame, metal workings inside on wooden frame. Chain, weight, pendulum and hands are metal. 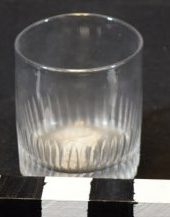 Water glass used at banquet given for Lafayette by citizens of Erie, June 3, 1825. Portrait of Lafayette in bottom of glass. 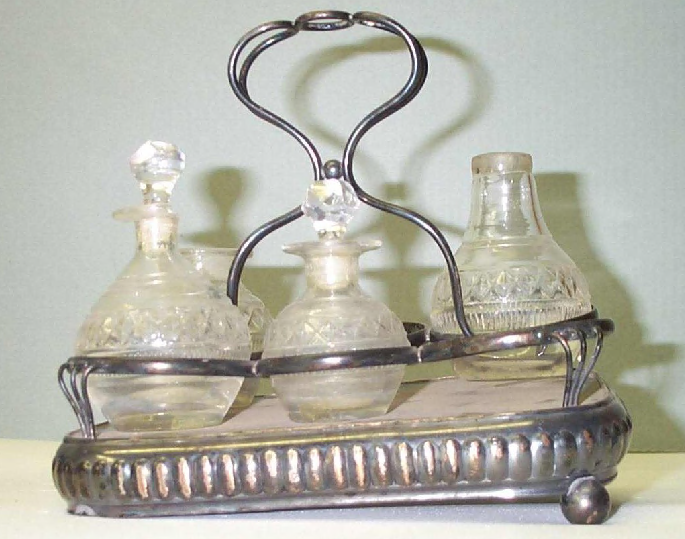 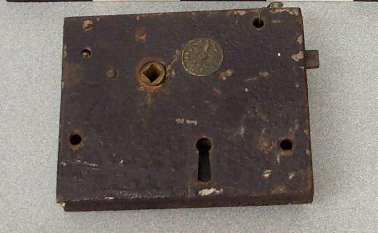 Lock from Dobbins house at 3rd and State Streets where Lafayette was entertained, June 1825, built in 1813. Lock has the company logo embossed, ''No.60 Improved Lock with a bird motif."

Now, here’s the part where I could pretend to be “Columbo” or “Sherlock Holmes”.  No murder involved here but definitely a mystery to solve.  I came across a large, heavily stained piece of fabric that had no catalog number on it in the collection.  It looked old, but some I work with didn’t think it was.  The search began.  What was it and why did we have it?  Being a museum curator, I sometimes think the objects “talk” to me, I know I’m strange that way.  Our accession records of donations were not easily searchable at that point, so I had to investigate our vast archival holdings to find out anything.  Well, one day,  I randomly walked into our archival storage, looked down and saw a box that had a general title on it.  I had no recollection of this particular box.  I opened it and studied the contents and found the following newspaper clipping: 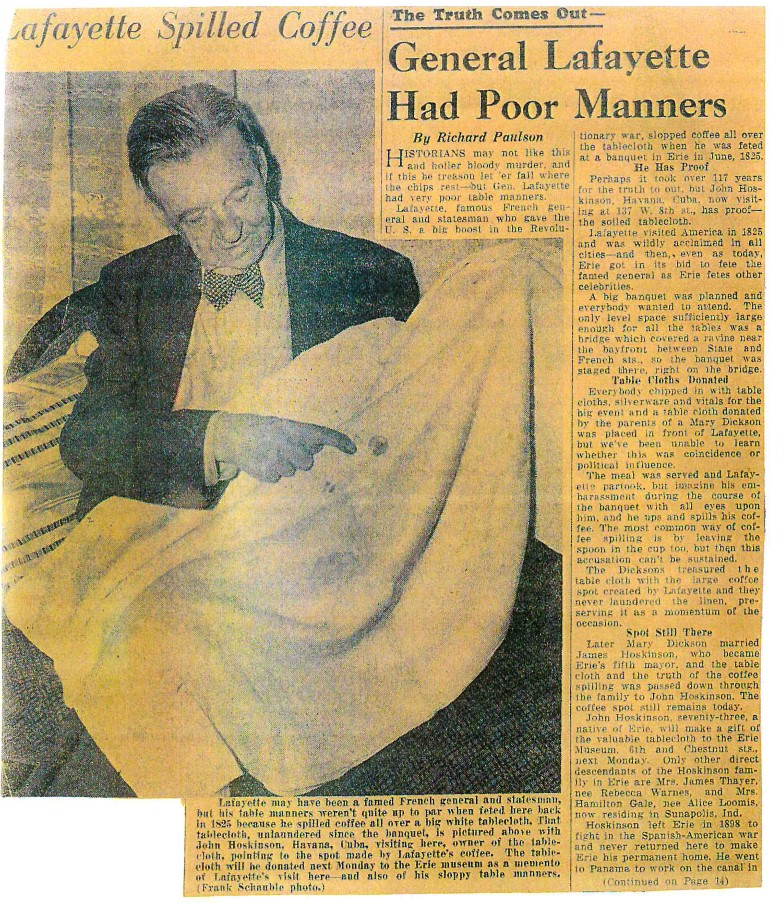 The visible stains in the photo matched those on the cloth but the date was cut off the clipping.  The only way to verify what I was looking at would be to find information from the original donation.  So, I turned the clipping over and read the back.  There was a small article about an 11-year-old boy who died a couple days before and it listed his birth date.  I did the math, finding out the year of the cloth donation, looked for donations to the museum that year and HURRAY, I found the information I was seeking!  It has been properly labeled with its catalog number and is in my database; the information never to be lost again!

I love to imagine myself dressed in 1825 splendor, relaxing under the shade of ships’ sails on a beautiful June day enjoying a meal with fellow Erieites and one of the most famous people of the time!  What a happy day it must have been.