Many of us learned what we know about the Millcreek Flood when riding on the Erie Zoo Train, which passes over a bridge where the creek itself is still visible, before it disappears into the Millcreek Tube. Enthusiastic train engineers describe how the tube has prevented future devastation like the flood that took place on August 3, 1915.

That bridge is known as a “drift catcher”, it prevents large debris from entering the tube. 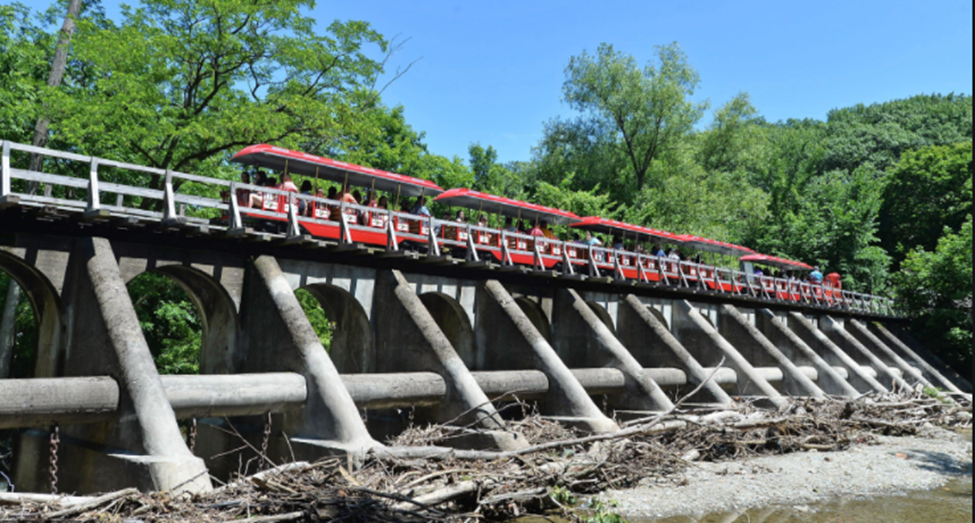 The 1915 flood is by far the most well documented in photographs in our collection.

Today we recall the anniversary of the flood of 1878, when storms dropped 5.11 inches of rain in the Erie area.

According to the newspaper report in The Erie Observer, September 19, 1878, a portion of which is shown here, “The water took possession of the West Mill Creek post office…Three hives of bees were out of sight for about twenty minutes, and strange to say, when they reappeared, they were as lively as ever…At Cooper’s mill they were grinding wheat, when the first thing they knew the elevators were carrying water and making dough instead of flour.”

The two lives that were lost were those of an English immigrant shoemaker, James Dodsworth, and his 15-year-old daughter, unnamed, when their wood frame house which stood on the bank of the creek collapsed.

The damage was not limited to Mill Creek. In Girard, on Elk Creek, part of the dam of D. D. Camp was taken out by flood waters, and he lost 90,000 feet of lumber. The water rose to such a height near flat of Girard Borough that the family of Mark Wilcox had to be taken from their second story by boat. Mr. Wilcox lost his entire barn and a lot of chickens.

We have many, many postcards, and photographs in our collection of the 1915 flood, but none of the 1878 flood. The reason for this is that many of the technical developments that allowed “snapshot” type photography did not occur until later, but were much more advanced after 1900, the year Kodak introduced their first “brownie” camera.

We have these two postcards of Mill Creek as we like to remember it, calm and tranquil, and not raging and dangerous. 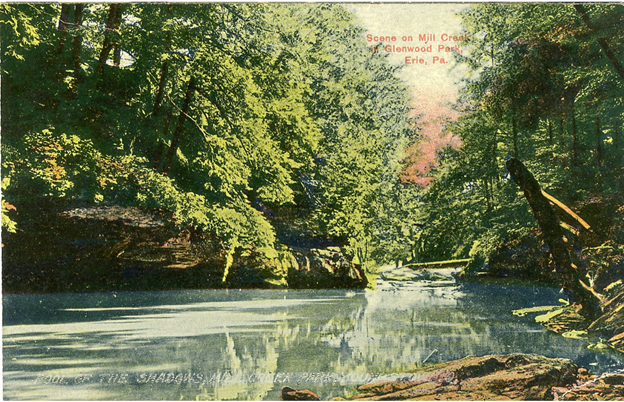 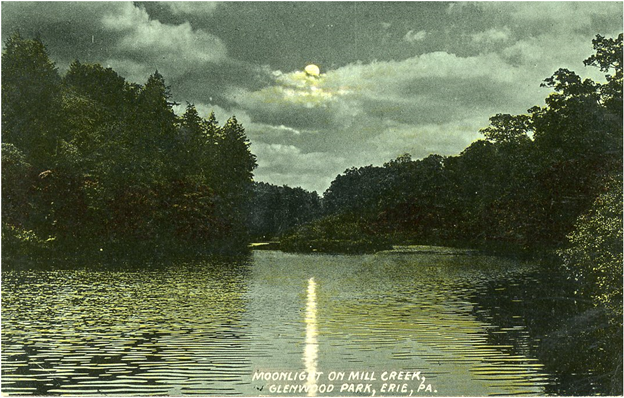