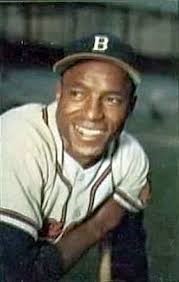 Samuel Jethroe (1917-2001) was born in Columbus, Mississippi, and grew up in East St. Louis, Illinois. Jethroe, a switch-hitter who threw right-handed, played semi-pro baseball in the St. Louis area after high school and briefly caught for the Indianapolis ABCs in 1938.

From 1942 to 1948, Jethroe played in the Negro American Leagues for the Cleveland Buckeyes and batted a remarkable .487 in his 39 at bats in his first season there. Due to the fact that professional baseball, like most of the United States, was segregated at the time, teams in the Negro Leagues played other teams in the league, traveling by bus, staying in “black only” hotels. Their following was huge, and their on-field play was energetic and entertaining. Many of the players in the Negro Leagues were as good or better than those of the all-white Major Leagues. In a roadside accident in September, 1942 outside Geneva, Ohio, two Buckeyes players were killed, and Jethroe was injured. He received a physical deferment from military service in World War II.

In April, 1945, due to pressure from a Boston city councilman and black sportswriter Wendell Smith,  Jethroe and two other black players were given a tryout for the Boston Red Sox. Among the three was Jackie Robinson who would become the first black player in the majors in 1947. The Red Sox had no intention of integrating their team, and Jethroe returned to the Buckeyes. That year, the Cleveland Buckeyes beat the Homestead Grays of Pittsburgh to win the Negro World Series. In 1947, the Buckeyes lost the negro World Series to the New York Cubans, four games to one.

In 1947, Jackie Robinson broke the color barrier and signed with the Brooklyn Dodgers in the National League, and Larry Doby signed with the Cleveland Indians in the American League becoming the first African American players in the majors. More were soon to follow, among them, Sam Jethroe. He was signed to play in the minor leagues from 1948 to 1949 with the Brooklyn Dodgers and Cleveland Indians. In the fall of 1949, he was sold to the Boston Braves by the Montreal Royals for $150,000. On April 18, 1950, Sam Jethroe became the first black player on the Boston Braves, hitting two home runs. His play at the plate as well as his base stealing earned him Rookie of the Year in 1950 at the age of 32. 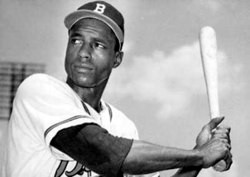 Jethroe with the Boston Braves

In 1952, Jethroe slumped badly. He was reported to have vision issues, and rumors circulated that he was older than his listed age. He still managed to hit the last grand slam home run in Boston Braves history. The team moved to Milwaukee the following season. Jethroe spent the 1953 season playing with Triple-A Toledo. In 1954 he was acquired by the Pittsburgh Pirates. On April 15 he played his last game in the majors and spent the next five seasons with Toronto in the International League. Known as “The Jet,” major leaguer Don Newcombe called Jethroe “the quickest human being I’ve ever seen.” 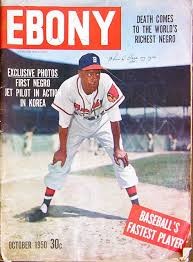 After his career in the majors ended, Jethro settled in Erie, Pennsylvania, where he worked in a factory and played semi-pro baseball with the Pontiacs in the city’s Glenwood League. He then opened a bar. In 2004, he sued Major League Baseball in order to collect pension payments. The lawsuit was dismissed by a Federal judge, but in 1997 Major League Baseball decided to give a yearly payment to Negro League players, including Jethroe. On December 16, 2020, Major League Baseball announced all the statistics amassed in that league’s segregated history will be included in all baseball statistics.  Sam “The Jet” Jethroe died in Erie of a heart attack in 2001. He is buried in the Erie cemetery in Erie, Pennsylvania.