Briefly, the 83rd was officially designated in the summer of 1861 after the Union defeat at the Battle of First Bull Run and was composed of men from northwestern Pennsylvania. The regiment arrived in Washington City on September 20, 1861, where they received their uniforms and old Harper’s Ferry firearms.  On October 1, the regiment crossed the Long Bridge into Virginia, spent a few days at Arlington Heights, and then moved a few miles west to Hall’s Hill where they joined the Third Brigade of General Fitz-John Porter’s Division of the Army of the Potomac. New Springfield rifles replaced the old firearms. The 83rd trained and drilled for five and a half months at Hall’s Hill during the winter and early spring of 1861-1862 (Source: Amos Judson, History of the 83rd Regiment Pennsylvania Volunteers, 1865).

Source: Base Map, Library of Congress, Geography and Map Division

On March 10, 1862 the regiment finally broke camp to start moving south with the rest of the army and arrived at Fairfax Courthouse by evening. Private Oliver Willcox Norton (a resident of Girard), bugler for the 83rd , described the march in a letter to his cousin L, dated March 17, 1862 (Source: Oliver Wilcox Norton, Army Letters: 1861-1865, 1903).

The “grand army” has at last moved. Our brigade left Hall’s Hill at daylight last Monday morning [March 10] and marched to Fairfax Courthouse. The whole army advanced the same day. On arriving at Fairfax we heard that our cavalry had been to Manassas Junction  and found it evacuated and the barracks of the rebel army a mass of smoking ruins…”Now what is to be done?” was the question we asked as soon as it was satisfactorily ascertained that these reports were true. We rested at Fairfax, waiting for another rainy day, which did not come till Saturday [March 15]. Then we marched to Alexandria. Our regiment has never moved yet without marching in the rain. 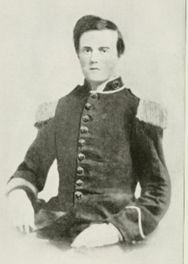 Later in the letter, Norton describes in greater detail the abysmal conditions of the march from Hall’s Hill to Fairfax Courthouse:

It commenced raining just as we marched out of camp on Monday and rained till we halted at Fairfax. We had a hard march. After we had gone some three or four miles the men began to throw off blankets, coats and knapsacks, and towards night the road was strewn with them. I saw men fall down who could not rise without help. The rain soaked everything woolen full of water and made our loads almost mule loads. As for myself, I stood it well, at least as well as any, but I was never so tired before. I am acting as regimental bugler, but I could not blow a note when we stopped at night. We pitched our picket tents which we carry with us on  the ground lately occupied by a seccesh regiment. We built fires, boiled our coffee and roasted our bacon and then lay down on the ground to sleep. Oh, how we slept!

The next day, a drier sunnier day, men from the 83rd visited the Blenheim House near their camp, signed the wall, and Their signatures are visible to this day – some clearer than others. 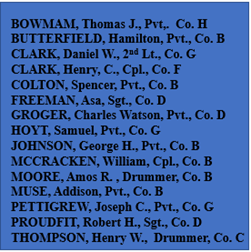