How do we know when these men visited Blenheim House? The 83rd camped near Fairfax Courthouse from March 10-15, so the men had to visit the house in that five-day span. The graffiti provides the answer. 21-year-old 2nd Lieutenant Daniel Webster Clark, the only officer of the 83rd to sign the wall, wrote the date “March 11, 1862” along with his signature. 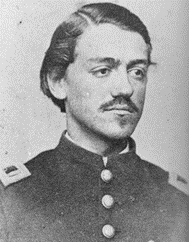 The quality of some of these 83rd signatures is quite good. For example, Private Spencer Colton’s signature is definitely legible, even if his penmanship is poor. 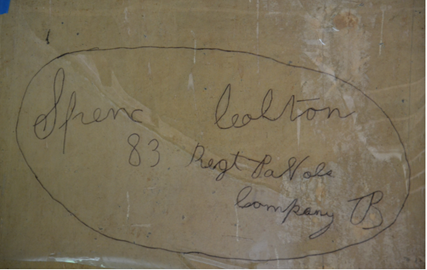 While signing the wall in the attic was probably a lark, many of these men later felt the impact of fighting on a Civil War battlefield. What happened to these men? A few months after visiting Blenheim House they “saw the elephant” and experienced combat for the first time as part of the Peninsula Campaign enroute to Richmond, VA. The Battle of Gaines’ Mill on June 27, 1862 was particularly hard on these men. Three were both wounded and captured by the Rebels and later released.  None of these men returned to the regiment due to their wounds. Another soldier was wounded so severely at Gaines’ Mill that he was discharged. Three other men were killed in later battles: one at Malvern Hill, VA (July 1, 1862) one at Second Bull Run, VA (August 30, 1862); and the other at Gettysburg, PA (July 1863).  One soldier was wounded at Gettysburg and captured at the Wilderness, VA (May 5, 1864); another was wounded at Peebles Farm, VA (September 20, 1864). Only six men of the fifteen were fortunate enough to be discharged at the end of their enlistment terms or at the end of the war. As can be seen, many of these men who signed the wall at Blenheim House became casualties (wounded or killed) during the war (Source: Samuel Bates, History of Pennsylvania Volunteers, 1861-1865, 1869)

You may ask, “How did the graffiti survive into the 21st Century?” The graffiti covered walls on both the first and second floors and the attic. The Wilcoxons after the war did not attempt to erase or remove the graffiti on the first two floors – they wallpapered or painted over it. The graffiti that was on the white plaster in the attic was left untouched by four generations of Wilcoxons. Only later, after the wallpaper or paint was removed for restoration was the graffiti revealed.

The Blenheim House is now owned by the City of Fairfax and is open to the public.

So, a tangible part of Erie history is resident in a small two-story farmhouse in Fairfax, Virginia.  If you find yourself in Fairfax, give Blenheim House a visit!