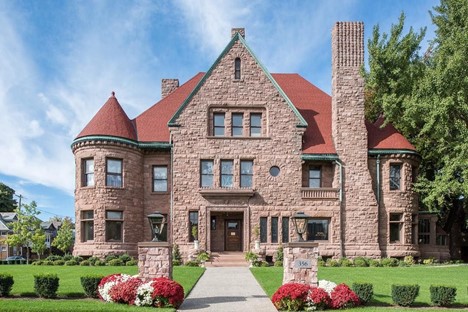 Visitors to the Watson-Curtze Mansion on the grounds of the Hagen History Center in the heart of Erie’s “Millionaire’s Row, West 6th Street, will notice, even before entering, the many intricate carvings in the mansion’s Medina sandstone exterior, as well as in the ornate interior woodwork. As a new employee, I often repeated “look at the woodwork” when giving tours. While I now limit myself to one such statement, questions from visitors and my own curiosity caused me to do some research into the carving, in order to find out for myself what it all means.

Completed in 1891, the Watson-Curtze Mansion was home to two prominent Erie families between its completion and 1941. The Watson family commissioned the architectural firm of Green & Wickes of Buffalo, New York, to design their home at 356 West 6th Street in Erie. The design chosen was to be Richardsonian Romanesque.  Richardsonian Romanesque takes its name from 19th Century architect Henry Hobson (1838-1886) who hoped to revive the Romanesque style. When I describe it to visitors, this style can be summed up by words such as “big,” “Powerful,” “Strong” and “imposing.” The Watson-Curtze Mansion is certainly all of these. My son said upon his first visit to the mansion it reminded him of the building in the 1994 film The Shawshank Redemption. The building used in the film was actually the Ohio State Reformatory or the Mansfield Reformatory in Mansfield, Ohio, which is in the Richardsonian Romanesque style. My daughter thought it looked like Hogwarts from the Harry Potter films. Another visitor said in looked “foreboding” and didn’t have much “curb appeal.” I always thought of the house as beautiful. 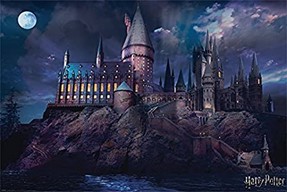 Upon approaching the front door of the Watson-Curtze Mansion, visitors will notice several symbols in the home’s stone doorway, the face of a woman and cherubs. The house, remember, is Romanesque. The ancient Romans were pagans that worshiped many gods and believed in evil spirits. Keeping this in mind helps. Did Harrison Watson believe in evil spirits? Not likely but the style of the house called for it. Faces were thought to ward off evil and evil spirits. There is no documentation that the face of the woman over the front entryway is meant to be a specific person as has been suggested, but a good historian keeps looking. The cherubs symbolize fertility. 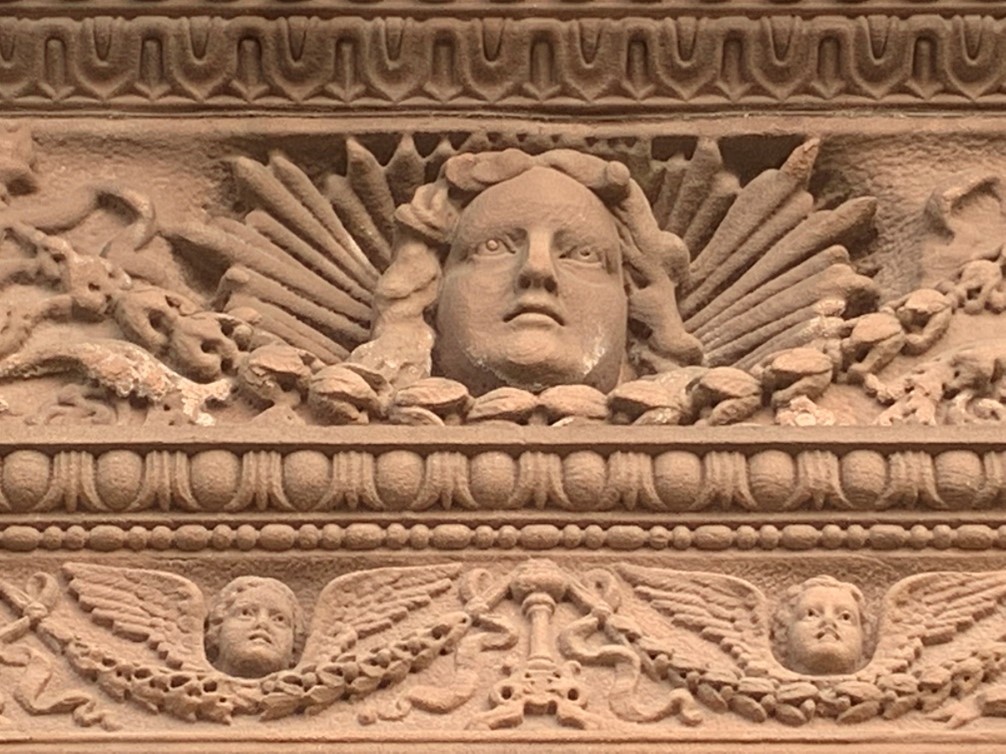 The massive wooden front door, as well as the sandstone carvings around the entryway, are called “egg and dart” and are repeated throughout the mansion. Egg and dart symbolize fertility and strength. The “dart”  is a spearpoint on its side for strength. Once inside, visitors will see the ‘egg and dart” pattern carved into the massive and ornate mantle above the fireplace. Egg and dart trim and molding is still produced and can be found in many lumber yards today. 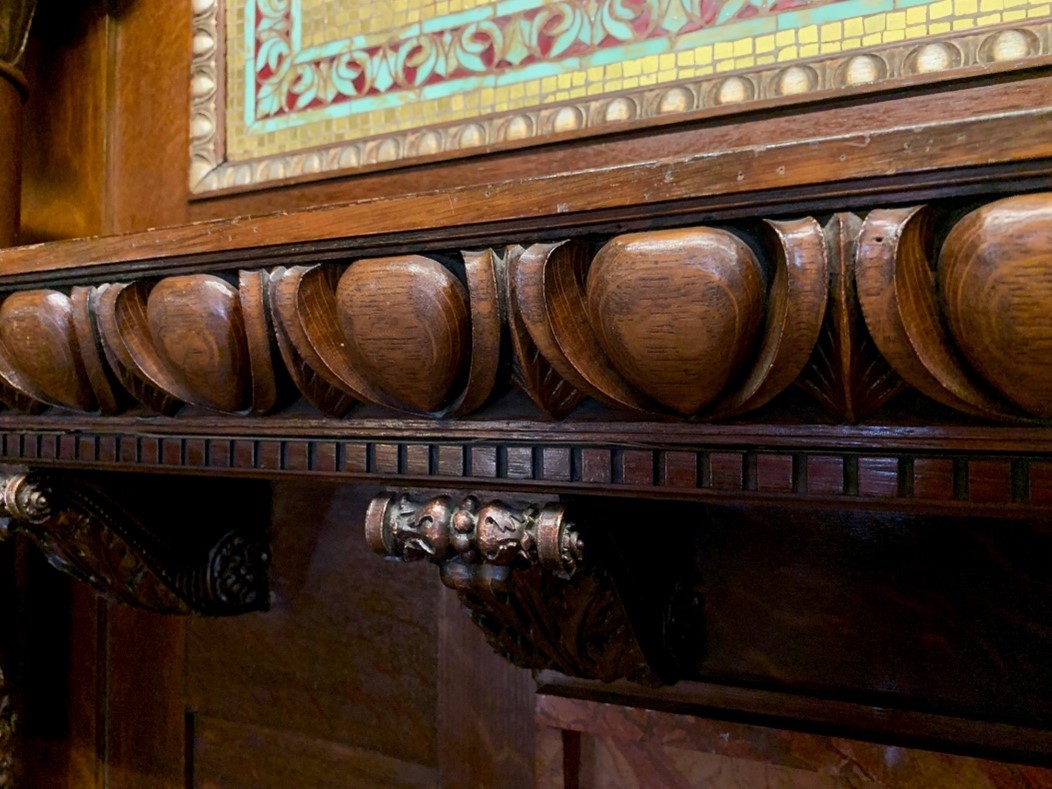 Egg and Dart on the Watson-Curtze Mansion’s great hall mantel. 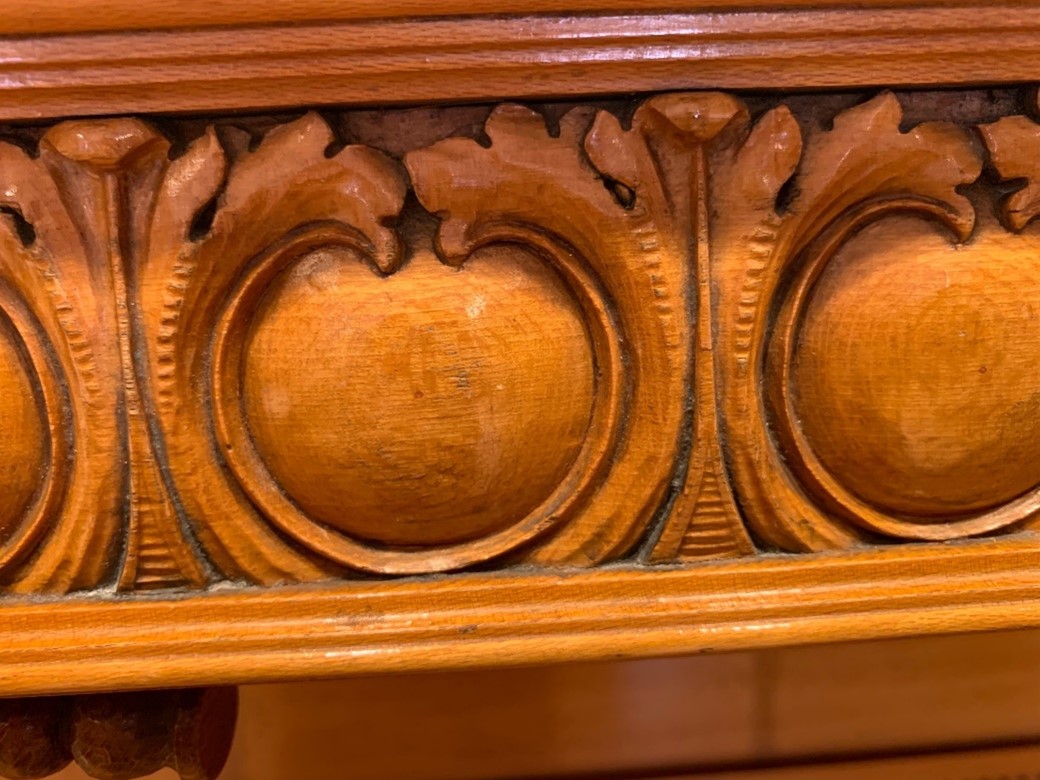 In the mansion’s library, used as the living room for the families, one is struck by the ornate carvings that surround  the fireplace. Here, fertility is the main theme. This time for crops. Mrs. Watson was a keen and established gardener, and the family did own a summer home in Millcreek Township a few miles west of the city they called “the farm.”  It is likely it all just fit the Romanesque motif.

The face carved in wood on both sides of the library’s fireplace represent a “green man”; vines or leaves protrude from the nose, and grapes and other plant life are elaborately seen. 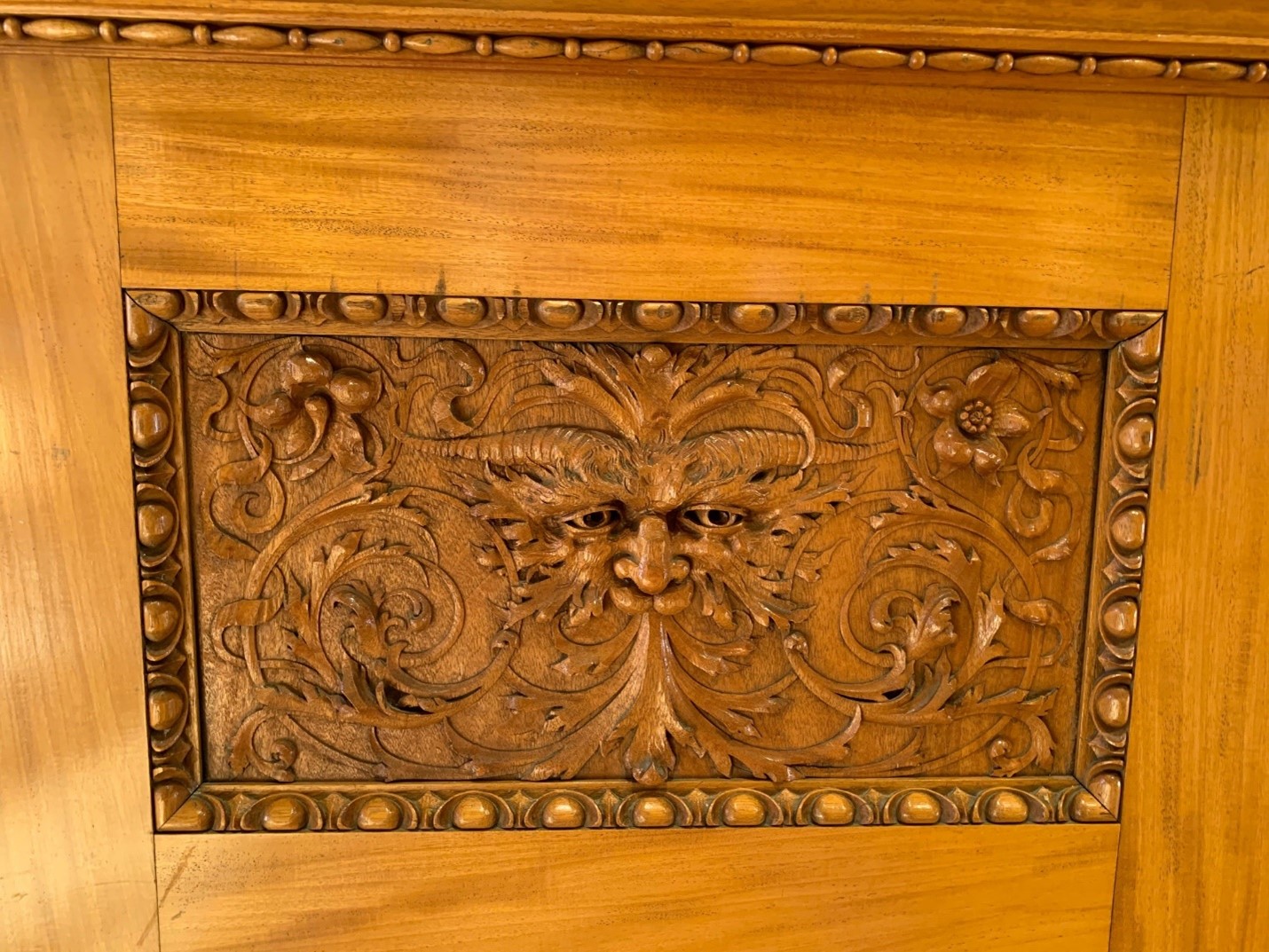 The “Green Man” surrounded by egg and dart in the library.

As a visitor tours the mansion, one may ask if the woodwork was hand-carved. Some is known to be machine-carved using a pantograph machine, a simple duplicating machine. The machine-carved woodwork is flat. Hand carved creations, such as the “green man” and the elaborate carvings over many of the fireplaces, are raised and done by hand. It is not sure if the elaborate woodwork was created onsite or off.

Two more carvings will greet visitors in other rooms of the mansion, such as sunbursts crowns and seashells. Sunbursts, meant to be rising suns, symbolize life everlasting and victory over death, both ancient pagan symbols. Seashells symbolize good fortune, birth and resurrection. Crowns symbolize, of course, power, glory and immortality. 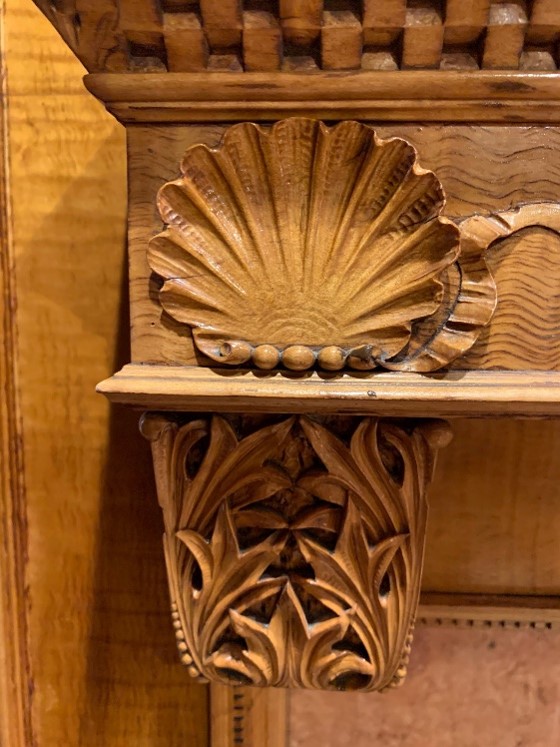 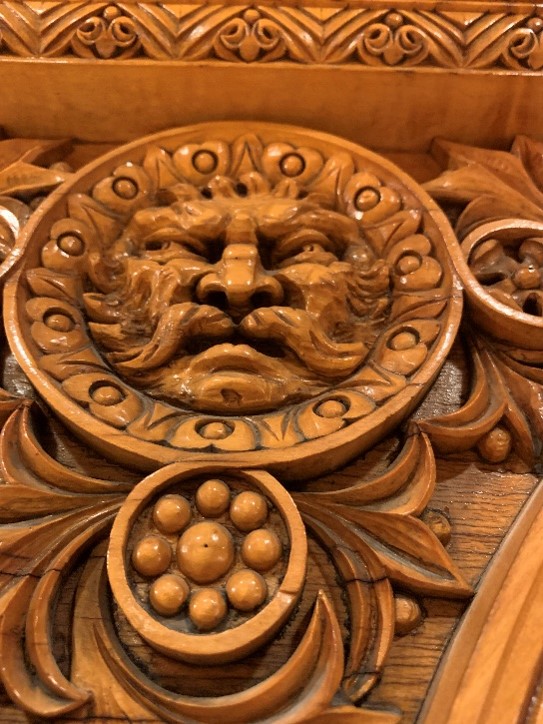 Face in the woodwork of the Watson-Curtze Mansion. 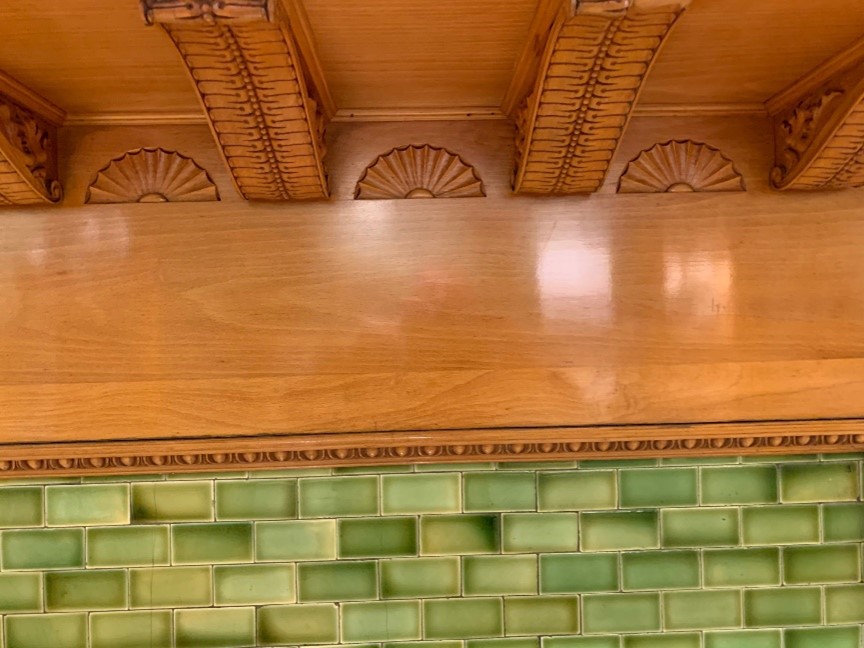 The study of the meanings in the wood carvings in the Watson-Curtze mansion are many and add greatly to understanding the decor of this beautiful home. The “Jewell of Millionaire’s Row.”

The Watson-Curtze Mansion is only one of the 4 buildings on the campus of Hagen History Center and is open to the public six days a week.