Take a look back at the history of Penn State Behrend

“My first class was a German class, and it was held upstairs in the grainery of what we called the barn on the Behrend estate. The grainery was big enough for the four or five students who were going to take German … In the downstairs of the barn, they were hauling out the horse manure to build classrooms down there.”

This was the Behrend Center that greeted freshman Dennis Jacobson in September 1948. How did Harborcreek end up with a college bearing such a rustic setting?

In spring 1948 Mary Behrend, widowed seven years and then living in Greenwich, Connecticut, had returned to visit the estate she had shared with her husband Ernst Behrend, founder of Hammermill Paper Company. Glancing out of a window, she noticed several men inspecting Glenhill Farm, which she had considering selling. Spurred by requests from prominent Erie businessmen, they had come to Erie from Pennsylvania State College to scout locations for a possible satellite campus. Penn State had been offering extension classes in engineering at Central High since the late 1920s, but this dedicated place would allow students to complete their first year of classes locally (in a variety of subjects) before moving on to State College or another institution to finish their education. 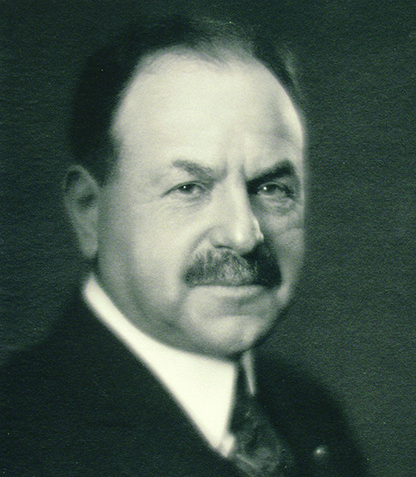 After speaking with her daughter, Harriet Sayre, who was then a married mother of two living on Long Island, she surprised the officials by donating the 400-acre property to the school. In her October 1948 address at the Behrend Center dedication, she recalled explaining to Harriet the rationale for her gift: “I think this is something that would be a wonderful memorial to Father — something he almost could have planned himself. I think we should give it all to the college.”

The University chose an alumnus, T. Reed Ferguson, as the administrative head of the Center. Beginning that summer he and his wife and daughter lived on campus in order to supervise the $50,000 renovation of existing buildings which were converted into classrooms and laboratories, as well as a cafeteria, a dispensary, dorm rooms, and faculty apartments. The buildings making up the college were centered around the former Schilling farmhouse. The Fergusons lived in the former Schley homestead on Jordan Road. Students (numbering about 150 that first year) contributed to campus life by holding dances and talent shows. Within six weeks of the opening of the campus, they had published a newspaper. The first issue celebrated Mrs. Behrend’s gift and reported on the Center’s October 30th dedication, a day celebrated annually as Founder’s Day.

During his tenure (1948-1954), Ferguson started the first campus tradition, “Hanging of the Greens,” a ceremony held each December at the family chapel in Wintergreen Gorge Cemetery to honor the Behrends. He also oversaw fundraising for a new building, Erie Hall, so named because residents of the city donated the funds.

In 1954 another alumnus, Irvin Kochel, replaced Ferguson. A World War II vet, he brought along his wife, Ethel, and their three children to live in the Schley house. They would be the last to do so as it was sold and moved up Jordan Road to become the property known as “Stormy Hill.” Kochel’s tenure was a time of growth in many arenas. Behrend Center became Behrend Campus in 1959 and it began offering a second year of courses. In 1971, Penn State trustees changed the name to Behrend College as it became the first campus outside of Happy Valley to grant four-year degrees. To celebrate Behrend’s 25th anniversary in 1973, the inaugural Behrend Medallion was awarded to Harborcreek’s astronaut hero, Paul Weitz. 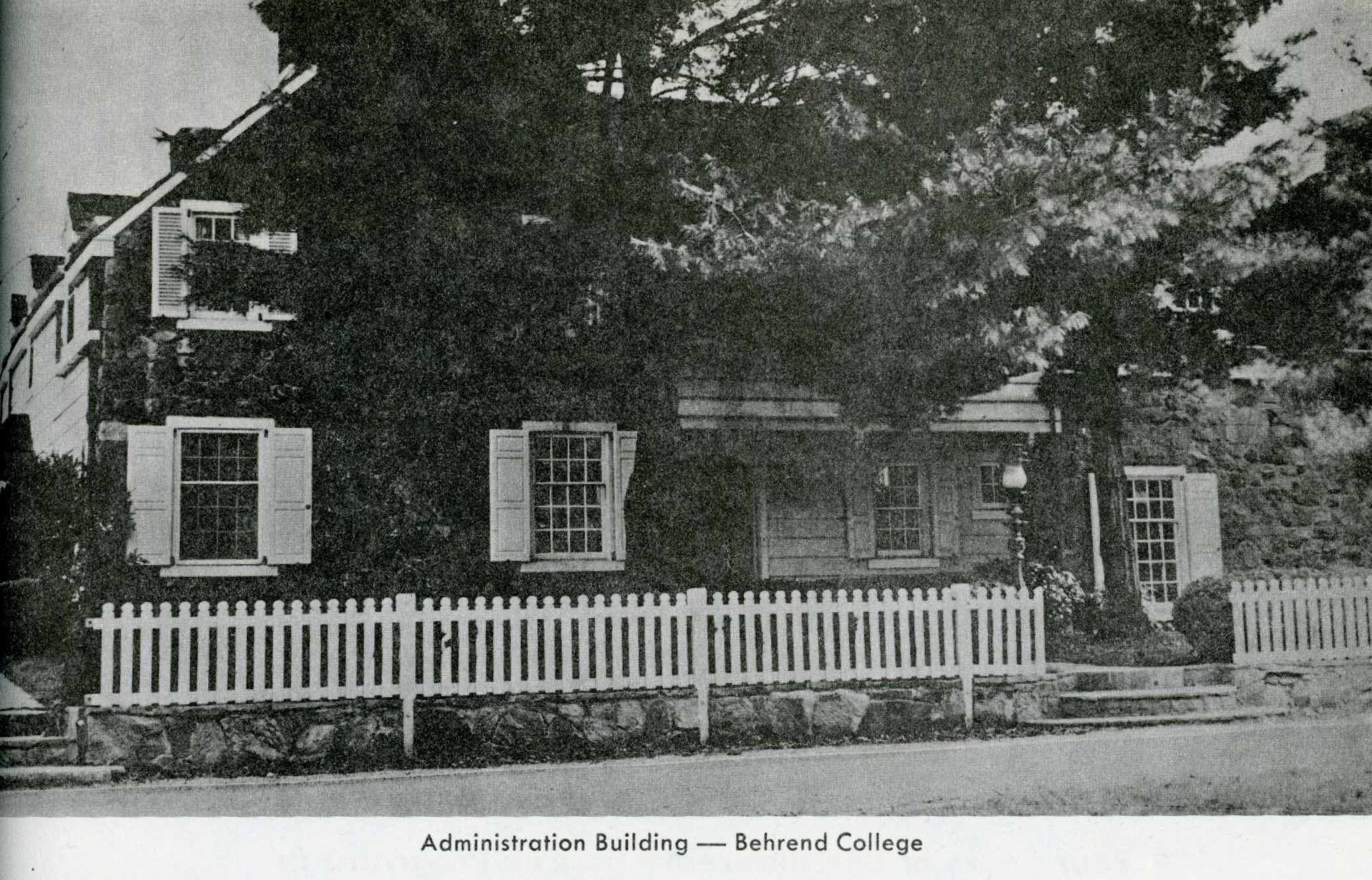 The Glenhill Farmhouse was used as the administration building at Behrend College in 1974.

The student body had grown tenfold to 1,500 and there were more buildings to accommodate them. Additional classroom and student union space included the Otto Behrend Science Center, built with funds bequeathed by Ernst’s brother, and opened in 1963. Buildings named for two of the businessmen who had championed an Erie campus, Edwin Nick and J. Elmer Reed, followed.

Student life was enhanced by three dorms, Perry, Niagara and Lawrence Halls, as well as Dobbins Dining Hall. The historically minded will recognize that these names all relate to the Battle of Lake Erie. This naming tradition is credited to Kochel.

In 1980 Kochel, like Ferguson before him, moved on to a new administrative position at Penn State and Dr. John M. Lilley began his tenure as campus head, eventually sporting the improved title, Provost and Dean. Lilley focused in his first few years on fundraising, building up the faculty, and enhancing the reputation of the campus in the Erie community. Three years later the college celebrated its 35th anniversary, the highlight of which was a visit by Henry Kissinger which was partly arranged by a new generation of the Behrend family: grandsons Richard and William Sayre.

As Penn State Behrend began its 36th year in 1983, John Lilley was three years into his tenure as Dean of the college. His mantra for leadership was “vision and resilience” and he brought that to fruition through land acquisition, fundraising, advancing faculty research, and enhancing campus spirit.

In 1996 an Engineering Complex consisting of several buildings including one named for Harborcreek’s Witkowski family was completed. The complex is now the home of the School of Science and the Yahn Planetarium which opened in 2014 after the Erie Planetarium was relocated to Behrend. Not all spaces created over the years were for the sole use of the university. The Knowledge Park complex is “a research and development area designed to allow knowledge-based companies to locate closer to and take fuller advantage of the intellectual and physical infrastructure of the college." It was also a longtime home of the Harborcreek Historical Society.

Dr. Lilley’s development efforts led to the adding of the Logan House (the former Elisha Mack estate on Station Road), the Junker Center, and the Smith Chapel to the Behrend landscape. Additional housing units constructed through the Lilley era (and beyond) have made it possible to educate more resident students. The Black family’s $20 million dollar gift to the school of business in 1998 was the third largest in university history at the time.

Initiatives launched under Dr. Lilley’s administration included one of the nation’s first undergraduate programs in plastics engineering technology, as well as the Economic Research Institute of Erie (ERIE) which collects, analyzes, interprets, and disseminates data and information on the Erie regional economy. In 1998 NOAA provided funding for the campus, under the direction of Dr. Robert Light, to start the Sea Grant project at Presque Isle.

Several milestones in athletics occurring during the Lilley years and are worth mentioning. In the mid-1980’s Penn State finally allowed campus teams to call themselves “lions” instead of the previously preferred “cubs” and in 1997 the college became founding members of the Allegheny Mountain Collegiate Conference. The three-run homer that Behrend alum Tom Lawless hit in the 1987 World Series, continues to be a point of pride.

One of Dr. Lilley’s earliest and self-proclaimed “best” decisions was to hire Jack Burke as Associate Dean in 1981. This was at a rather bleak time in Behrend’s history when the university was threatening to scale the campus back to a two-year school.  When Lilley departed in 2001, it was Burke who stepped in as interim administrator before officially taking on the job for almost a decade, even delaying his retirement to see the campus through the 2008 financial crisis. The sprawling Jack Burke Research and Economic Development Center, built into a hillside on Jordan Road, honors him. The center, opened in 2006 after a 20-year battle for funding, offers a unique concept among academic buildings as it combines the School of Engineering and the Black School of Business in one location so that students can learn to collaborate, as they will often do in their careers.  It also doubled the amount of campus office and classroom space, while the student census topped 4,000 for the first time. 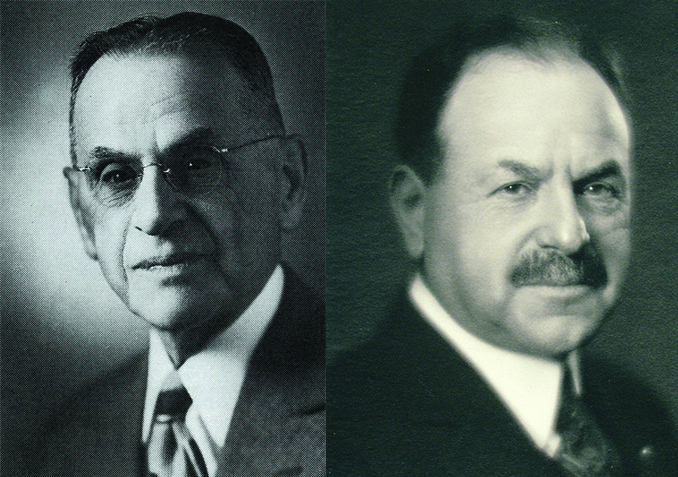 Donations from brothers Otto Behrend, left, and Ernst Behrend were instrumental in helping the campus grow.

In 2003 the campus earned recognition as an arboretum from the American Association of Botanical Gardens and Arboreta and has since earned the Tree Campus USA designation from the Arbor Day Foundation.

Dr. Donald L. Birx served as chancellor from 2010 until the 2015. In those few years new academic programs were started including arts administration, childhood and early adolescent education, environmental science, industrial engineering, and nursing as well as graduate degrees in manufacturing management and professional accounting.  Ground was broken in 2014 for the long-planned Advanced Manufacturing and Innovation Center (AMIC), a collaborative research facility which combines classroom space with engineering lab and spaces for private industry to work with the college as part of an open lab concept.

Upon Birx’s departure, Ralph Ford, director of the School of Engineering became interim and then permanent chancellor. He has continued championing his original open lab idea with the addition of the Innovation Commons which offers “an instant support network for small businesses and start-ups – a key goal of a $1.5 million Ignite Erie initiative, a partnership of Penn State Behrend, Mercyhurst University, and the Erie County Gaming Revenue Authority (ECGRA).”

This article first appeared in two parts as the Harborcreek Historical Society column of the Spring 2019 and Summer 2019 issues of YourHarborcreek magazine and is used with the permission of the Harborcreek supervisors.