The curatorial department has begun cataloging the history center's collection of over one thousand pieces of framed art. One of these works depicts a dignified lady with grey hair, wearing a dark dress and a white lace scarf tied by a ribbon. The nameplate attached to the frame states, "LAVINIA STANLEY SANFORD SPENCER, 1817-1886." At the lower right corner of the oil painting, it is just possible to make out the signature of the artist, Lovisa Card-Catlin, and the date, 1910. 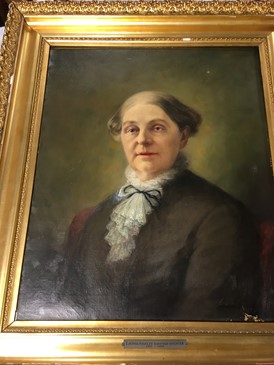 Lovisa Card Catlin is responsible in large measure for the flourishing of art in Erie during the late 19th century, as the town became a city. She was born in Gainesville, New York in 1846. Little more is known about her early years, but she moved to Erie after the Civil War, to live with her aunt and uncle at 726 French Street, where she began to give private lessons in art. This residence would become her home and studio for the rest of her life.

A few years later, she started the Erie Art School, the first of its kind in Erie, at 6th and State Streets, while continuing her own education at schools on the east coast. Many of her students went on to professional careers in art.

Lovisa's cousin, Ellen, and her husband Henry Catlin, also shared the house on French. Henry had been the editor and owner of the abolitionist newspaper True American before the war. Ellen died in 1882, and Henry and Lovisa eventually married in 1893, shortly after her aunt died, leaving the residence on French Street to Henry. 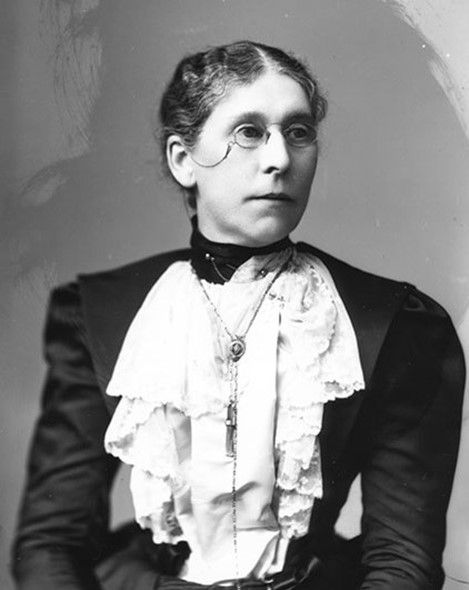 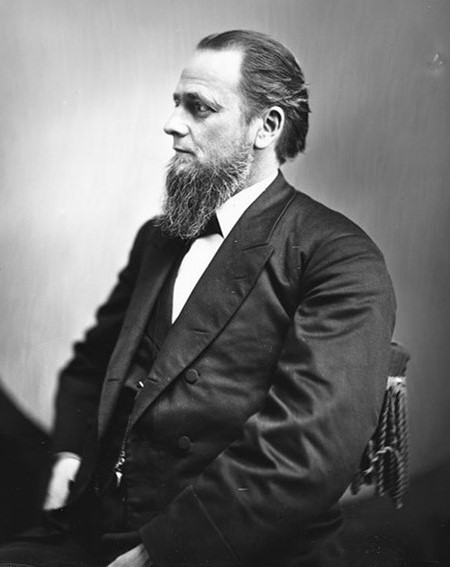 Henry was considered to be "one of Erie's most highly respected citizens." The couple continued their involvement in many local cultural efforts.

On January 28, 1898, a group of local artists, many of them Lovisa's former students, met at the Catlin home to discuss the formation of an art club to hold exhibitions and educate the general public. The group met again in March, when the Art Club of Erie was chartered, and Lovisa was unanimously elected its first president. That May, the club's first annual art exhibit of over 300 works was held at Erie Academy at 9th and Peach. This was the first "Spring Show," a tradition that continues to this day.

When the new public library building was built on Perry Square in 1899, it included exhibition space for works of art provided by the Erie Art Club. The club continued to bring exhibitions of American artists to the library's gallery and purchased paintings to establish a permanent collection. By 1900, the Art Club claimed about 275 members, whose goals were stated as "the advancement of art in this locality by creating an interest in and raising the standards of art, by cultivating a higher appreciation of art works and promoting a spirit of fraternity among artists and art students."

When Henry Catlin died in 1903, the Erie Daily Times praised his widow as "a lady of great ability and fine culture, to [whom] Erie in reality owes its excellent standing among other cities [for] its permanent collection, and that splendidly organized Art club."

In 1906, the Erie Daily Times, reporting on the ninth annual exhibition at the library, attributed the display by "leading American artists" to "the untiring efforts of the Art club and its gifted president which have made possible the showing of such a remarkable group of paintings." 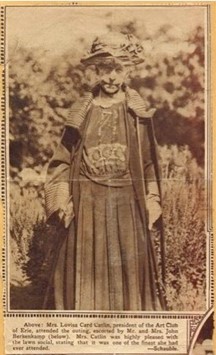 Lovisa was the only president of the Art Club of Erie from its formation until her death. She gave lectures to the public on topics such as Dutch old masters. The Art Club was not merely satisfied to exhibit works by American artists. It secured an exhibit by contemporary French and English artists in 1919. The Art Club also featured works by Pennsylvania women artists such as Lillian Genth and Ruth A. Anderson.

In early 1925, despite suffering from serious illness, described as "cardiac asthma," Lovisa brought in an exhibit of 43 works by American artists that had been shown at the 1924 Venice Biennale, an international art exhibition founded in 1895. Erie was the first American city to show the works.

In March 1925, the Art Club awarded Joseph Plavcan, a student at Academy High School, top prize in an art competition. Lovisa "was detained at home by illness," and missed the ceremony. Plavcan went on to a distinguished career in art and taught many local Erie artists who flourished in the second half of the 20th century, and taught the next generation, thus continuing the tradition begun by Lovisa Card Catlin.

Lovisa's health continued to deteriorate, but she conducted art classes until a few days before her death on December 7, 1925. The next day the Erie Times stated, "Her very life seemed wrapped up in art and things beautiful. She gave of her time, strength and money to bring better things into the life of Erie people."

Lovisa's students, fellow Art Club members, and "eminent men and women of the city" attended her funeral. She is buried in Erie Cemetery. In her will she placed the bulk of her estate in a trust to fund a scholarship for high school students pursuing secondary study in art, architecture, or industrial art. This scholarship is still awarded to seniors in high schools in Erie County.

At its next meeting following her death, in the art gallery of the public library, the Art Club eulogized Lovisa and displayed her portrait, painted by Orlando Rouland, which is still in the Erie Art Museum's permanent collection. 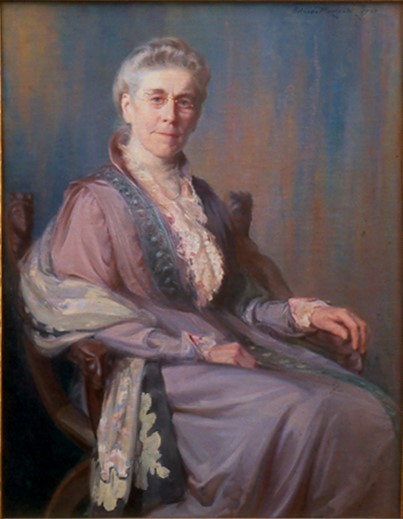 Little information about Lovisa's own artwork survives. A list of Lovisa's works from the Art Club's first show suggests that a few of them may have been portraits, but not of named subjects as in the case of the painting held by the history center. She never exhibited her work publicly again. The only other one of her works whose whereabouts is known, "Finnigan's Back Door, Easthampton L.I." dated 1887, is in the Erie Art Museum's permanent collection.

As stated earlier, the portrait of Lavinia Sanford Spencer is dated 1910. This date is significant because Lovisa's only sibling, a brother, had died that year, and she then went on a two-year trip to Europe. She was in her 60s and widowed by this point, and probably no longer producing works on a regular basis.

The painting depicts Lavinia as an older woman. The Hagen History Center also has a painting of Mrs. Spencer, by a different artist, as a younger woman. Mrs. Spencer had died in 1886, so the painting is obviously not from life. Lovisa may have used a photograph as a guide, but an article in The Erie Magazine of July 1914 reported that she had been commissioned to copy family portraits in the collection of Frederick Huidekoper of Washington, D.C., so it's also possible that she had an earlier portrait to work from.

Given both women's stature in Erie society, it seems likely they had been acquainted. Presumably the Spencer family commissioned her to produce it, as Mr. Huidekoper later did. Perhaps she used the proceeds from the commission to pay for her trip overseas.

Lavinia Sanford was the daughter of Giles Sanford and Laura Goodwin. Giles Sanford came to Erie in 1810 and for many years was a partner of Rufus S. Reed, with whom he helped provide supplies for the building of Perry’s fleet during the War of 1812.

Lavinia married Judah Colt Spencer, the nephew of Judah Colt, who had founded the Pennsylvania Population Company, which held the warrants for all the land in the Eire triangle. Judah Colt Spencer, along with Lavinia's brother Myron, was one of the Founders of the First National Bank of Erie and served as its president for 22 years.

Lavinia's sister, Laura Goodwin Sanford, published the first history of Erie County in 1862, based on interviews with early settlers and family archives. Laura Sanford was also instrumental in the establishment of the Erie Public Library. Lavinia had five children. One of her grandsons, Herbert Reynolds Spencer, wrote a history of Erie in 1962, one hundred years after his great aunt's history.

In a tribute to Lovisa Card Catlin published in the Erie Times shortly after her death, Charles J. Dutton, a local minister, and author, wrote that her art students numbered in the hundreds and she "did far more than we can picture for the city welfare."  He quoted her as having said, "When I teach art, I am teaching a love of beauty, the power of expression -- I believe I am teaching religion."

Dutton said that Lovisa's dream was to see a separate art museum in Erie with its own facilities to display the permanent collection as well as works by local artists. How proud she would be today to see the beautiful building on Fifth Street welcoming visitors!