1880s fashion was much more slender than the previous decades. In fact, women were often heavily restricted due to how slender these dresses were. There were two main styles of women’s dress in the 1880s, the first of which was the princess line. This style was extremely tight and body hugging which gave women a slender silhouette. It also focused on putting decoration on the lower back. 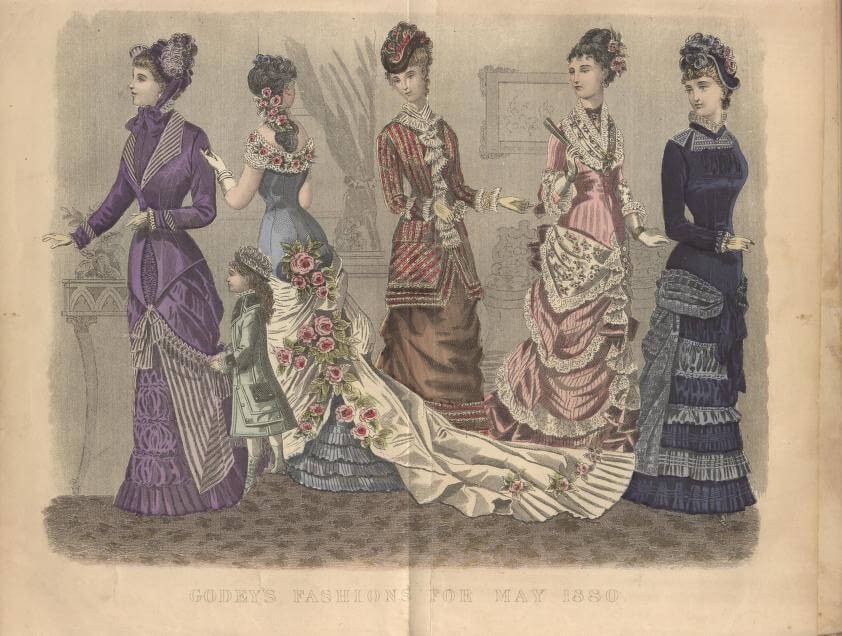 Around 1883 a second style came into prominence.  This style was based around a shelf-like protrusion above the backside that was held up by a rigid structure within the dress. This was known as a bustle. One of these styles, known as the “Lillie Langtry,” was a type of bustle that was made of multiple metal bands that could be folded back if the wearer wished to sit. These bustles kept growing larger and larger until 1886, when it became of such a large size that it was extremely inconvenient and quite ridiculous. By 1888, this was realized, and bustles began to shrink after that point. 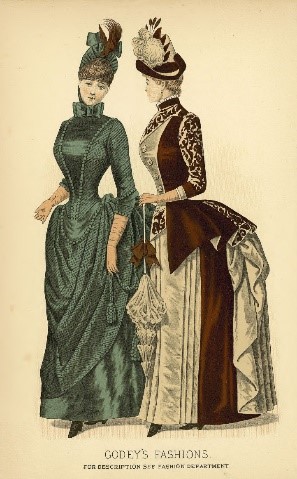 Throughout the decade general fashion trends began to change.  The cloaks of the earlier century began to go by the wayside.  High shouldered, tight sleeved bodices came into style, which were heavily influenced by the jackets worn by men.  Dresses became more similar to household furnishings, with rich and dark colors, ribbons, lace, and bows.  It was during this period that hats came into style, particularly hats with stuffed birds on them. Unfortunately, this led to the bird population being heavily reduced for the sake of fashion.

The 1880s were a time of transition in Erie.  Many new organizations were established which enabled people from various backgrounds to pursue different careers. Within the city of Corry, a school known as The King School of Oratory opened its doors.  The King School offered opportunities to both men and women, which was a new concept at the time. The Corry Business College also offered courses for both genders, which included typing, shorthand writing, and accounting.  The college began in 1885 and continued for almost two decades afterwards.

Corry became a boom town for business in the 1880s as oil was discovered there 20 years prior. The discovery of oil led to refineries, hotels, a post office, and multiple stores to meet the needs of the growing community.  One man at the time, George W. N. Yost, saw the potential of Corry. He moved his business, The Caligraph Typewriter Company to Corry in 1883, further influencing the area’s economic boom. Yost’s presence in Corry did not simply provide jobs for his own company however, as he became involved in many local projects as well. One of such projects was the “Climax Locomotive”. This locomotive was produced in Corry in 1888 and was capable of moving mass amounts of lumber inexpensively.  Yost’s presence in Corry increased their country-wide influence, and even garnered the attention of Mark Twain who invested in Yost’s typewriter company due to his belief in their effectiveness. 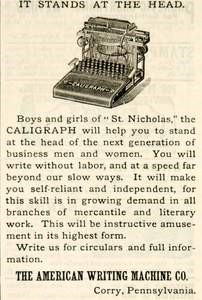 The Women of Erie

Amelia Von Buseck, the daughter of a wealthy farmer within Erie, married Ottomar Jarecki in 1880. Both Amelia and Ottomar shared a love of photography, which at the time was quite a complex process. For photography in 1880 to work, you needed a series of plates, chemicals, and specific rooms with perfect lighting conditions, making it a difficult hobby to get into. As Amelia and Ottomar shared the same passion, they became some of Erie’s first ever photographers. The couple even managed to turn many of their photos into slides enabling them to exhibit their photos to others.  Amelia’s influence extended outside of Erie and even the United States.  Amelia was so proficient at chess and bridge that she entered international tournaments in Europe. She often left Erie to explore Europe while Ottomar stayed behind to run a jewelry store that they owned together.

Mary Richards Depuy Spencer was born in Philadelphia.  After marrying Mr. William Spencer in 1880 the couple moved to Erie. Mary was actively involved with the Park Presbyterian Church, and later on with the Church of the Covenant. Mary’s claim to fame was her founding and presidency of the Needlework Guild, a local group that spent one day per week stitching various items. These items included garments, beddings, and other general “must have” items for refugees, mission stations, and “Starving Armenians”; which showed how much these ladies cared for others. These stitched objects were sent all around the world.  The Needlework Guild was even sent a letter from St. Quentin, France, thanking them for their contributions. Mary Spencer also cared for and helped those in Erie, working alongside Sarah Reed, as the two of them were quite close.