The earliest recorded instance of corsets in history is from the Minoan people. The Minoans were a group of people who lived in proximity of Greece on the island of Crete around 1,000 BC. The earliest image of a corset comes from a figurine of the Minoan snake goddess where she is depicted wearing a corset-like garment. The Minoans and other Grecian people desired the image of a small waist, so corset-like pieces were worn to achieve this effect. 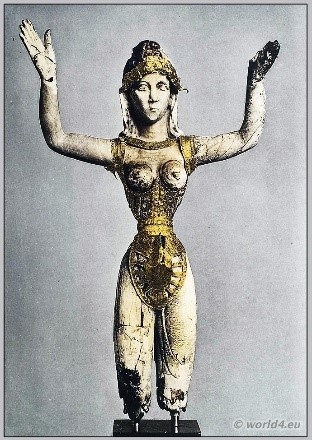 Throughout the Middle Ages, the body was seen as sinful, so corsets were not needed to accentuate a figure. Women wore loose fitting dresses that covered them from head-to-toe, prioritizing comfort over shape.

During the 1500s and 1600s, the idea of a corset that we know today began to gain in popularity. Women in the French court during this period idealized the image of a small waist. Corsets were worn, as both under and outer garments, to flatten the stomach and emphasize the fullness of the skirts and chest. In instances where corsets were worn as outer garments, decorative “stomachers” were worn over the laces on the front. The shape of corsets was achieved using whale bone or other strong materials laced through the material. Throughout these centuries, the goal of corsets was to shape a prominent chest, and slim the stomach and waist for women. 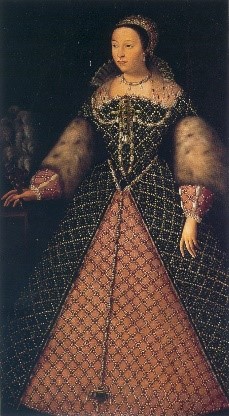 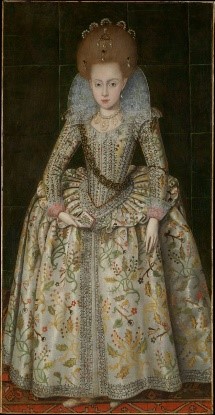 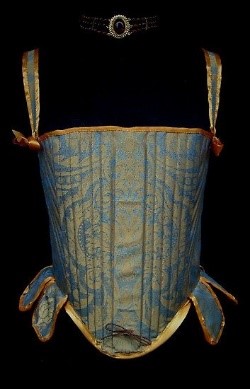 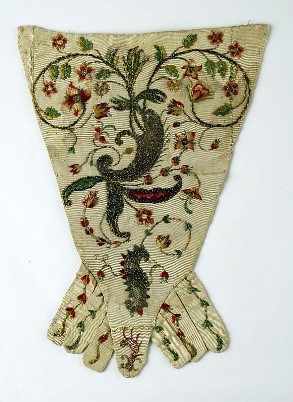 In the 1700s, in addition to slimming the waist and emphasizing the chest, corsets also aimed to improve posture. The figure that corsets of this time encouraged was that of a very rigid posture and a high chest. To accomplish such an erect posture, corsets had shoulder straps attached which would force the shoulders backward so far that the shoulder blades would touch! During this period corsets were also decorated very intricately, sometimes with artful depictions, gold trim, and/or silk brocades.

At the end of the century, Greek and Roman style fashions became popular for women. This “empire waist” style encouraged the popularity of “short stays”, which did not extend much below the breast, rather than corsets. However, these trends were short-lived and were ushered out by the Romantic style of the 1820s. 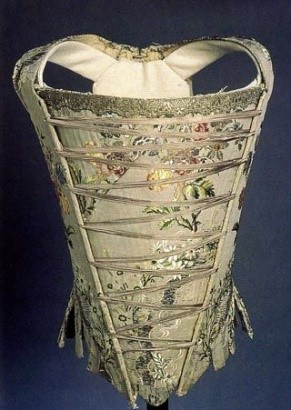 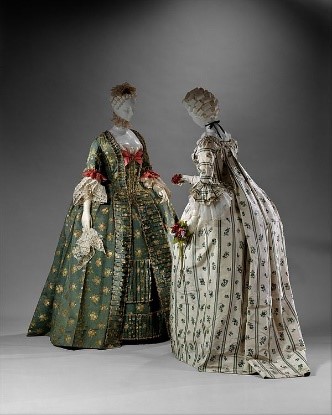 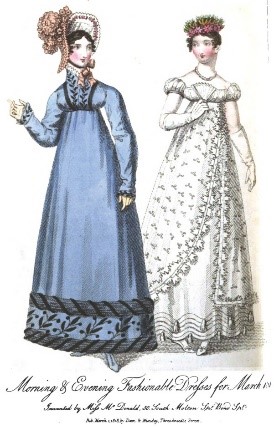 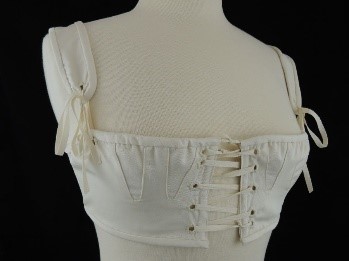 After the brief lapse at the beginning of the century, corsets were revived in full force for the remainder of the 1800s. Compared to previous decades, the structure of 19th century corsets emphasized a more natural, hourglass shape, and were more focused on shrinking the waist than previous corsets had been. This was especially damaging to women internally as was discovered towards the end of the century.

The 1830s were an important time for corsetry, and it was during this decade that the term “corset” was first used. Additionally, it was during this period in the middle of the century when the desire to contrast full skirts and a small waist using a corset was at its peak. To maintain this shape, some corsets had as many as 60-100 whalebones sewn into them. During the 1800s, corsets became easier to wear as the implementation of hook and eye clasps replaced the need for intricate lacing and allowed women to put on their corsets themselves. 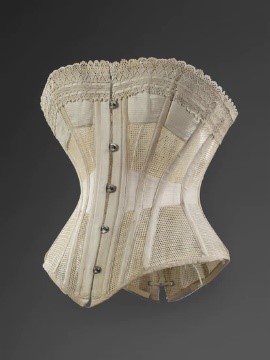 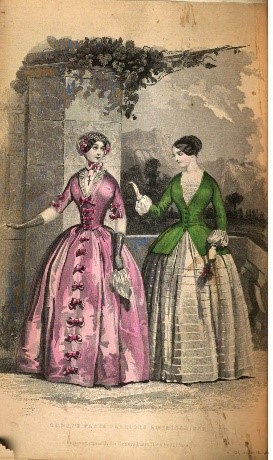 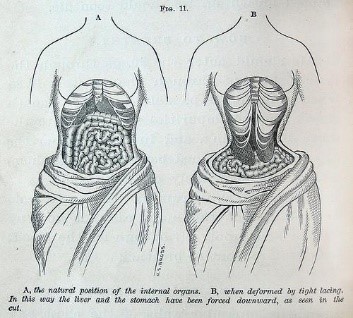 At the turn of the century, the shape of corsets changed as the body standard for women changed. Instead of an hourglass figure, women of the early 1900s strived to achieve an “S” shaped figure. While still slimming the waist, corsets now were worn to force the chest forward and the hips backward shaping the body into an “S.” Unlike the constrictive corsets of the 1800s, those of the early 1900s Edwardian era did not harm women’s structure and internal organs, resulting in a healthier form of shapewear. 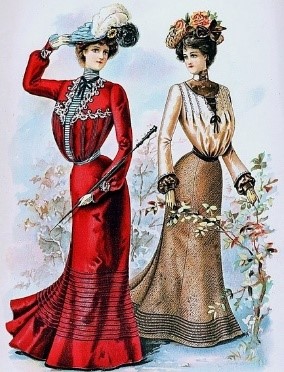 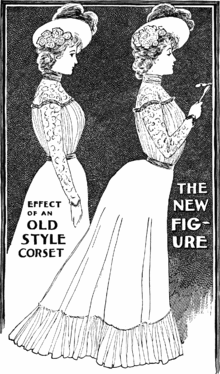 During the 1910s again changed form as women aspired to a new body type. The fashion of the 1910s was centered around high waistlines, narrow skirts, and a large bust. Therefore, corsets were now designed to shrink the size of the hips. These early 20th century corsets extended over the hips and ended below the bust line to accentuate a woman’s chest. The extension of corsets down to the top of the thighs was what inspired the “girdle,” a garment popular throughout the first half of the 20th century which also aimed to compress the hips. 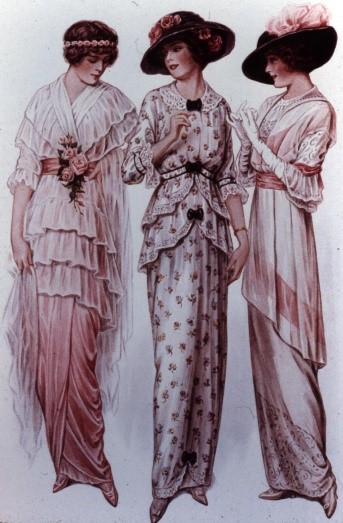 Corsets began to decline in popularity following World War I. As a result of the lack of clothing materials after the war, styles became looser and simpler. This eliminated the need for the type of corset that had been so popular among women for the past 400 years. As the decade concluded, the important role of corsets in women’s fashion ended. Throughout the 1920s, 30s, 40s and 50s, women still wore shapewear, but these garments became separate girdles and brassieres rather than full corsets. 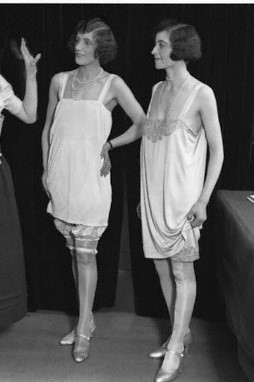 With the women’s movement that took place during the late 1960s, the remnants of corsets began to fall out of fashion. Throughout the rest of the 20th century, as styles changed, women wore fewer girdles and any other types of shapewear garments. Besides bras, spandex shapewear, and occasional decorative tops for aesthetic purposes, the corset has all but disappeared from the fashion of today. While some women today have reverted to a traditional style corset in pursuit of “waist training,” the majority of the female population thank the passage of time for freeing them of the societal obligation of daily corset wearing. 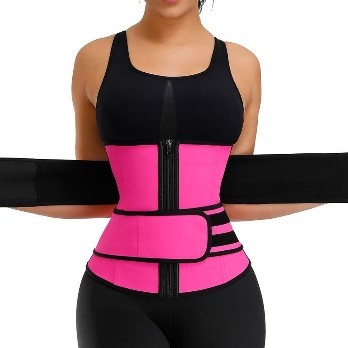 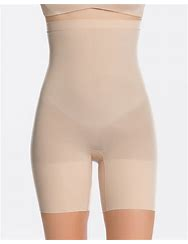