It was 1931. The nation was still in the Great Depression. Television hadn’t been invented yet. And Erie, PA, had a Warner Brothers movie house on State Street.

It all began with brothers Harry, Jack, Albert, and Sam Warner. The four founding Warner brothers immigrated from Poland. The three elder brothers opened their first movie theater in New Castle, Pennsylvania, in 1903.  In cities without a movie house, they would bring an old projector to towns in Western PA and Ohio and show films in a tent.

“The enormous financial success enabled Warner Brothers to become a major motion-picture studio. By the 1930s, Warner Brothers was producing about 100 motion pictures a year and controlled 360 theatres in the United States and more than 400 abroad.” (Britannica.com)

Today, only 6 of their original theaters are still standing, and Erie, PA, is fortunate to have this crown jewel still located on State Street.

“The Warner Theatre was listed on the National Register of Historic Places in 1982. Designed by Chicago-architects Rapp and Rapp, it was used as a movie theater until 1976, when it was sold to the Commonwealth of Pennsylvania. In the early 1980s, Erie converted the theater to a performing arts center, which has become the focus of a downtown revival.” (Warner Website)

Construction costs in early 1930 were an unbelievable $1.5 million. Furnished and decorated in the art deco motif, this elegant theatre is complemented by gold and silver leaf, gold-backed French mirrors, and crushed velour. The timeless and historic theatre was previously involved in a restoration and expansion project. (Warner website) Most recently, a renovation to the stage and back-stage areas has been completed.

The recent renovations are many.

The stage is larger to accommodate scenery from touring shows.  The stage also has a removable acoustical shell to enhance sound.

The orchestra pit is larger, and an entire platform can be raised and lowered from the stage deck to the trap level 12 feet below.

I was invited to a pre-view of the recent renovations to this historic landmark.

As a board member of the Erie Philharmonic, I have been to many Philharmonic performances in this hallowed hall. My breath has been taken away more than once with the caliber of the musicians and the beautiful sounds they produce.  However, nothing prepared me for the sounds of the Philharmonic with the most recent renovations to the stage.

The Philharmonic performance offered for donors and supporters of the Warner showcased the “range, delicacy and projection of the brand-new stage and acoustical shell.” (Grand Re-Opening program) It truly was amazing.

The musicians spoke about how the new stage will not only enhance the sound for the audience but also for the musicians.  Because of this, the musicians can perform at a higher level.

Steve Weiser, Executive Director of the Erie Philharmonic, advised “The new orchestra shell opens up worlds of new sonic possibilities for both our audience as well as the musicians on stage.  Not only will our musicians be able to hear each other more clearly, allowing them to perform better as an ensemble, but the overall sound projection out to the audience will be dramatically increased.  There will be a noticeable increase in contrast with volumes.  The loud parts will be louder, and the quiet parts will be even more quiet.”

The show not only goes on, but it goes on in a more beautiful and melodious way!

“The Warner’s history is varied and fascinating-filled with glamorous events, world-renowned entertainment, crowds filled with awe and laughter, repeated threats of demolition, and restored hope for the future.” (Grand Re-Opening program)

Warner Theatre with its famous design and timeless elegance is a cherished regional landmark. With seating for 2250, it serves as a venue for concerts, seminars, Broadway shows, and the Erie Philharmonic. (Warner website)

Please enjoy this crowned jewel at a future concert or show. We’re ready for the next 90 years! 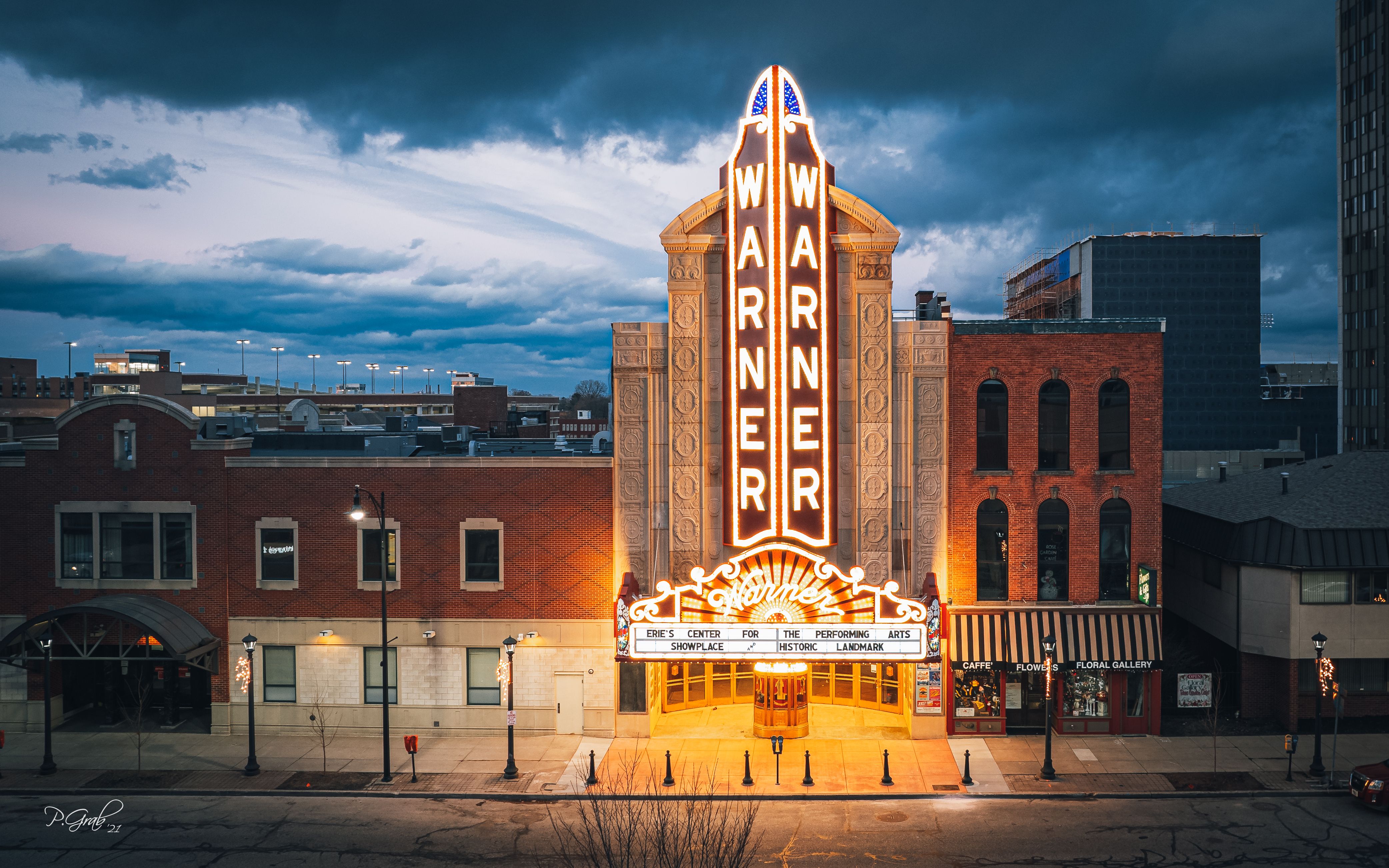