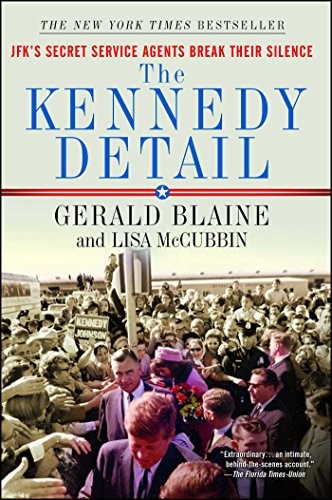 On November 22, 1963, President John F. Kennedy was assassinated while riding in an open limousine in Dallas, Texas.  This event has been written about in hundreds of books, detailed in documentaries and Hollywood films. The focus is usually on the assassin or alleged assassins and on President Kennedy. The Secret Service agents are simply viewed as men in sunglasses and suits-nameless machines that stood by while trauma gripped all those around them. The Kennedy Detail by Gerald Blaine and Lisa McCubbin changes that.

The Kennedy Detail uses the detailed accounts of the agents of the United States Secret Service through the entire Kennedy administration and their lives and careers afterward. Using the detailed accounts of many agents, not only Gerald (Jerry) Blaine. Most of the agents joined the Secret Service during the Eisenhower administration in the 1950s, some of the higher-ranking agents in administrative roles went as far back as Franklin D. Roosevelt’s tenure as President. The agents on the protective detail were mostly men in their thirties and forties; many were former military, and most were married. All were men, and only one was African American.

Their charge: protect the President, Vice President and their families with their lives. This was not the Secret Service we know today. They had no earphone communication nor bulletproof vests. They did not have military-style haircuts, nor did they all wear sunglasses. They could blend in, but they were always present.

Protecting John F. Kennedy, his wife Jacqueline and their two children Caroline and John, Jr. presented new challenges for the Secret Service. President Eisenhower, a former five star general, treated the men of his detail like subordinate soldiers he was used to commanding and called each “agent,” rather than by name. The Kennedy’s were less formal and learned each agent’s name and had a relaxed relationship with them. Not only did they know their names, the First Family remembered their birthdays and families. In a show of friendliness and kindness, the first day after the 1960 election, JFK flew to the Kennedy family estate in Palm Beach. JFK worked poolside on his transition as the agents in winter suits watched the perimeter. The President noted the agents were sweating in the Florida sun. He went inside the house and came back with an armload of short-sleeved shirts and told Agent Harry Gibbs and told him  to “Pass these out to the agents with my compliments. I think you’ll do a better job protecting me if you’re not uncomfortable.”

Agent Clint Hill was assigned to head Mrs. Kennedy’s detail (the Children’s Detail was nicknamed “The Kiddie Detail,” Hill and Mrs. Kennedy became close over the short span of the administration. Jacqueline Kennedy travelled extensively, both on extended trips abroad and to the family farm in central Virginia. It was Clint Hill who jumped onto the back of the limousine in Dallas on November 222, 1963, pushing a dazed Mrs. Kennedy back down and covering both the slain President and the First Lady as the car raced to Parkland Memorial Hospital.

Agents tell of meeting or being around the rich and famous. During a black-tie party on inauguration night, Agent Jerry Blaine called his wife Joyce. He began to regale her with stories of the glamorous stars and how attractive the ladies were when suddenly the phone went dead. Blaine’s wife had hung up on him. Blaine realized at that moment he had broken the unwritten code the agents lived by, never to say anything to worry their wives or, in this case, make them jealous.

The book is an easy read and moves along at a nice pace. Lisa McCubbin’s style is to the point and descriptive. No wonder Clint Hill chose to work with her on his books about his time in the Secret Service.

The majority of the book, of course is about the Dallas trip, the advance, the trip itself and the aftermath. These chapters are heart wrenching because of the anguish and feeling of having failed by the men of the Kennedy Detail. They had lost their man, and in their minds they had failed. Clint Hill seemed to take it harder , especially later in his career. He would serve for five presidents, retiring in 1975. His drinking and subsequent divorce caused by his depression had let him to the point where he could not pass the physical. It was not until a reunion of the agents in Dallas years later, the first time many had been back since 1963. Most, including Clint Hill concluded that every advantage lay with the shooter that day-there was nothing they could have done differently.

The Kennedy Detail is an excellent read and is highly recommended. The inside stories and behind-the-scene look into the Kennedys and the agents is fascinating. If this book is not enough, I also highly recommend Five Presidents and Mrs. Kennedy and Me by Clint Hill and Lisa McCubbin. The assassination accounts all begin to sound the same, but the other stories are worth the time.