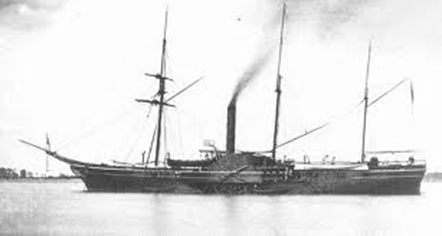 The iron-hulled U.S Paddle Frigate Michigan, homeport Erie, was launched in 1843 and commissioned in 1845. Michigan was the first iron-hulled ship in the U.S. Navy. The reader might be familiar with the “ironclads” of the Civil War. These ships were often just that-wooden ships clad in iron sheets to deflect enemy cannon shot. Michigan was made of iron. The 1840s was a time of experimentation in naval design. Ships had been made of wood for thousands of years, and that art had progressed to a high state development and had begun to see the introduction of steam engines to power vessels-even if most, like Michigan, were still fitted with sails. Michigan’s steam engine powered two large paddle wheels, one on each side.

Her homeport was Erie. It might be hard to imagine Erie, Pennsylvania, as a naval base-albeit one ship-but there was no U.S. Coast Guard station in the city at the time, and much of Michigan’s career was spent in rescuing vessels in danger or stranded on the waters of the “upper” Great Lakes. While the enlisted men of her crew lived aboard ship, most of the officers lived ashore, either in a government-owned hotel or in private homes. An officer’s salary allowed some to build or buy homes in the city. Surgeon William M. Wood, for instance, had a fine brick home built for him and his family on West Sixth Street in the city. Many a sailor who was stationed in Erie married a local girl, giving rise to the nickname “mother-in-law of the Navy” to the city. Possibly the most famous of these sailors is Captain Charles Vernon Gridley to whom the famous phrase was spoken at the 1898 Battle of Manila Bay-“You may fire when ready Gridley.” He married a cousin of Strong Vincent of Civil War fame. 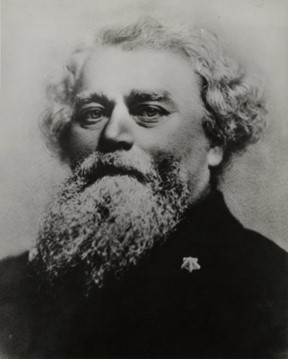 Geography and history played a part in Erie being chosen for the site of Michigan’s homeport. In 1812-13, Oliver Hazard Perry and Daniel Dobbins had built Perry’s fleet at the foot of Cascade Street on Presque Isle Bay. That fleet would go on to defeat the British at the Battle of Lake Erie on September 10, 1813. Erie’s connection with the Navy was cemented, and it would continue into the 20th century. As for geography, the Presque Isle peninsula  makes Erie a protected harbor. There probably would be no city there were it not for the shelter offered by the peninsula.

Michigan was built primarily to keep peace on the western Great Lakes. As a result of the Rush-Bagot agreement after the War of 1812 which demilitarized the lakes, and further agreements with Great Britain over armament and other issues concerning warships there. Michigan was the only armed U.S. naval vessel on the inland seas. While originally heavily armed with cannon, later she would carry only a few, The outbreak of the Civil War saw Michigan armed with fifteen cannon or “guns” of diverse types and size. Tensions were high between the U.S. and Britain. Smuggling from Canada to the Confederacy was of concern, as was the presence of a U.S. Army prison camp for captured Confederates at Johnson’s Island in Sandusky Bay, Ohio. Michigan would be the government’s troubleshooter on the lakes.

The Fenians, simply put, were Irish Americans who wanted a free Ireland. Free of the control and subjugation that island had been subjected to by Britain. The “Great Famine” brought about by the potato blight in the 1840s had greatly increased Irish immigration to America and Canada and fueled Irish hate for the British. Many Irish Americans served in the Union and Confederate armies during the Civil War. The years following the war saw an increase in the desire to gain independence for Ireland. The Fenians, many with military experience, saw their chance. They planned to hold Upper Canada, modern Ontario, hostage in return for a free and independent Ireland. The Fenian Brotherhood had established a government in exile in New York City and hoped for an armed conflict to overthrow British rule of Ireland. The raid into Ontario might be one way to accomplish that. As futile and farfetched as it sounds today, the Fenians felt a well-armed and experienced force could easily overwhelm and defeat Canadian Militia, who might very well be sympathetic to their cause as well as any British force they might meet. They had not counted on the United States Navy and the USS Michigan. 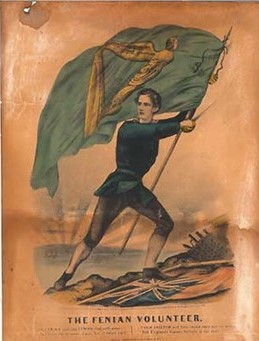 As spring 1866 came on, Michigan was undergoing extensive refit and rebuild at a Buffalo, New York, shipyard and by late April, Lake Erie was still frozen. It was not until May that the ship’s new captain Commander Andrew Bryson was able to follow his earlier orders to sail to Erie. Michigan had been having a bad winter. One sailor was missing and presumed dead; she had been grazed by the barge Major Anderson in Buffalo Creek before she could even gain the open lake. Extensive topside damage forced her to return to the shipyard for repairs. It is fortunate that Michigan had to remain in Buffalo, and by the end of May 1866, word had spread that the Fenians were up to something. Arms were being shipped to Buffalo and Fenians were arriving by the trainload at the city.

By the night of May 31, 1866, it was clear to Commander Bryson that a Fenian invasion was imminent. He even knew it would likely be from Black Rock, New York, across the Niagara River to a spot near Ft. Erie on the Canadian side. Bryson, however, was unable to steam to the crossing point to interdict in the crossing because by midnight, the ship’s pilot Patrick Murphy and ship’s second assistant engineer James P. Kelley had not returned to the ship. Bryson knew it would be dangerous to try make headway in the dark without an experience pilot. It turned out the Fenians were at work. Kelley was either a Fenian himself or at least sympathetic. On the night of May 31, he had managed to get Patrick Murphy (a Medal of Honor winner in the Civil War) to imbibe in substantial amounts of alcohol, cigars and entertain a lady.

On June 1, 1866, the Fenian force of between 1.000 and 1,500 crossed the Niagara River just where Bryson had thought they would. The Fenians spent most of June 1 consolidating around Ft. Erie and sent out patrols. Michigan finally sailed and, with all her gunports open, headed into the river toward Ft. Erie. She intercepted and captured a tugboat towing a barge loaded with supplies. With two tugs C. M. Farrar and Harrison acting as support, Michigan anchored at dusk, and Commander Bryson transferred a twelve-pound howitzer to each. At 10:15 pm, all three set out to patrol the river. That night, both of the tugs, under the command of officers from Michigan, managed to capture boats bound for Canada carrying supplies and men to the Fenians.

At about 8:00 am June 2, 1866, the main Fenian force which had marched earlier that morning from Ft. Erie met a force of Canadian Militia of about nine hundred men north, of the town of Ridgeway. The Canadians did well until a false report of Fenian cavalry spread through their ranks, causing them to fall back. When news of a new threat to the north-British regulars and more Canadian Militia arrived. The Fenians pulled back toward Ft. Erie. Near dark that night, a second battle took place as the Fenians attacked Canadian militia trying to prevent any Fenians from fleeing back to the United States. 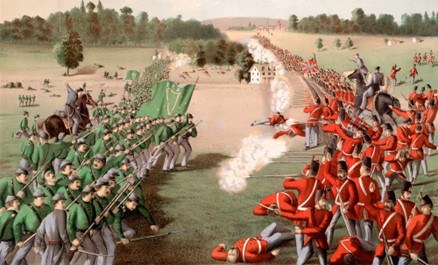 The Battle of Ridgeway

For all intents and purposes, the Fenian Raid was over. Casualties had fortunately been light on both sides. The multi-pronged Fenian attack had fizzled out to only the one described about. The Fenians had no artillery, cavalry, logistical support and no real support from the Irish population in Ontario. Their plan was bound to fail. 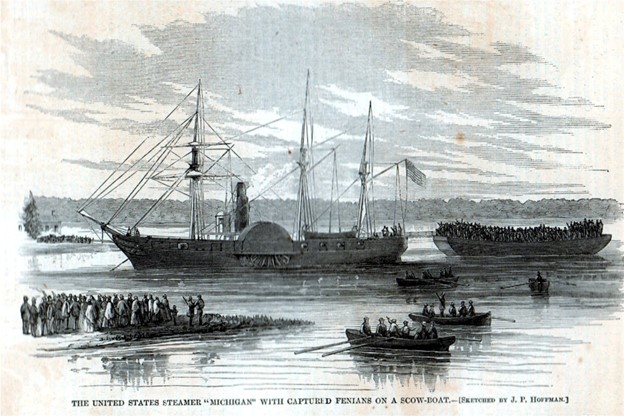 The presence of Michigan no doubt had influence the Fenian’s decision to retreat. Their force was disarmed, fed, and released back into the United States on their own recognizance and allowed to return to their homes.

Rumors of a Fenian raid across the Niagara River continued to be spread over the next few years. On November 6, 1866, the “Lady members of the Fenian Sisterhood” boarded Michigan while she was anchored at Black Rock. They demanded the return of a green Fenian flag captured on June 3. The ship’s logbook does not state the outcome, but it seems likely they got the flag.